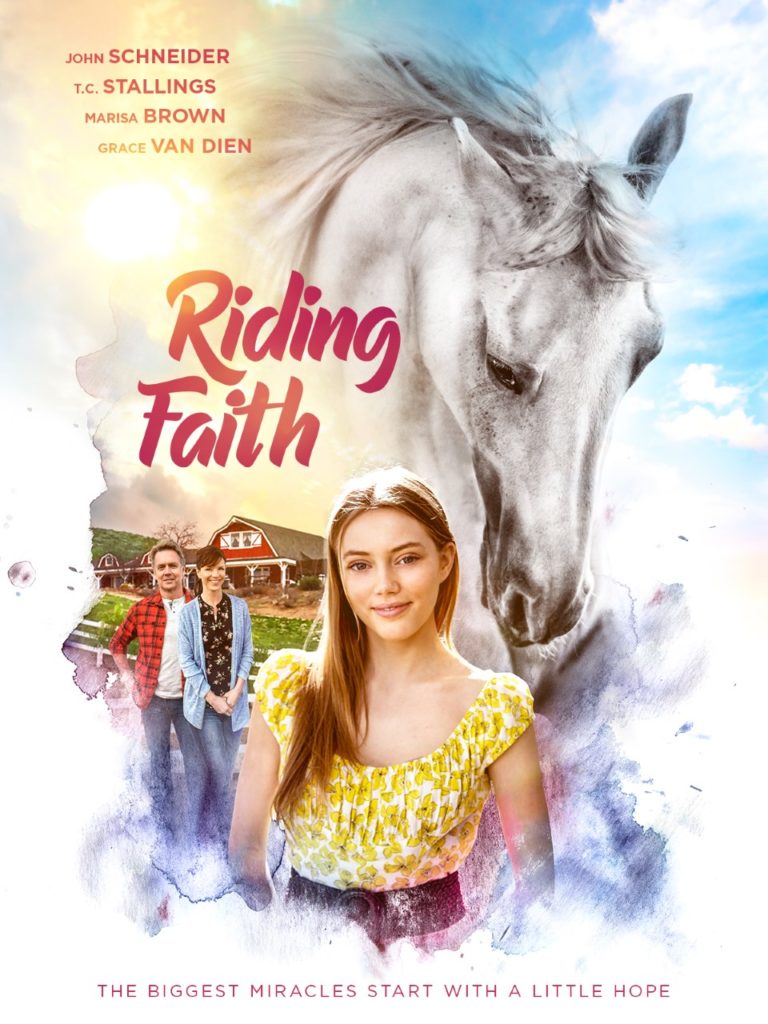 RIDING FAITH follows Grace and her parents, Mike and Rebecca, as they buy a ranch and move to the country to have more family time. When Mike returns to the military for another tour, he’s killed in action, leaving Grace and Rebecca to run the ranch. Grace turns away from God, and Rebecca deals with their home about to be foreclosed by the bank. However, Pastor Williams isn’t going to let Rebecca and Grace deal with this struggle alone.

A TV movie released on Netflix, RIDING FAITH is overly dramatic and way too long. However, it has an inspiring Christian worldview with strong patriotic elements. Faith in God is at the forefront and having hope that He will take care of you, even when life doesn’t make sense, is the main theme. Helping others is also extolled. For example, Rebecca and Grace’s church family helps them in their time of need. RIDING FAITH does have a few scenes where the mother and daughter have a dysfunctional relationship. RIDING FAITH is a wholesome Christian movie, but the execution leaves something to be desired.

(CCC, BB, PP, M):
Dominant Worldview and Other Worldview Content/Elements:
Very strong Christian worldview as the virtues of faith, hope and charity are at the forefront. Church services and Bibles are seen, scripture is referenced, and prayer, forgiveness and thankfulness are extolled. Biblical elements include the pastor and congregation coming together to help members in their time of need. Patriotic elements are seen as two men served in the military, and one of them ultimately gives his life for his country
Foul Language:
Boy cleans horse excrement from a stable
Violence:
None
Sex:
Kiss between married couple
Nudity:
None
Alcohol Use:
None
Smoking and/or Drug Use and Abuse:
None; and,
Miscellaneous Immorality:
A somewhat dysfunctional relationship between a mother and daughter, but it is resolved in the end, and main character somewhat rebels against the values of her youth, but returns to them in the end.

RIDING FAITH follows Grace and Rebecca as they deal with the aftermath of losing their father and husband while on tour with the military. A television movie released on Netflix, RIDING FAITH is overly dramatic and way too long, but it has a strong Christian worldview promoting faith, trust and hope in God, with strong patriotic values.

RIDING FAITH follows Grace and her parents, Mike and Rebecca, as they buy a ranch and move to the country to have more family time. Mike buys Grace a horse and names her Faith, to remind Grace to never lose faith in God. The horse becomes Grace’s best friend.

Mike, a former member of the military, restores an old church building soon after moving to the small town. He recruits one of the men he used to be in the military with to come and be the pastor of the church. Pastor Williams accepts, and the church is ready to build a congregation.

After the church opens, Mike gets a call from the military to do another tour, and he decides to go. Sadly, Mike is killed in action, and Rebecca and Grace are left with the ranch and no way to run it.

Grace completely loses her faith in God and stops attending church with her mother. Grace also stops praying and trusting in God’s plan since He took her father from her. Grace’s friend, Chris, hangs around to help her with her with Faith and to be a shoulder to lean on when things get rough. Chris also encourages her to get back to her faith even though she doesn’t want to yet.

While Grace is dealing with the loss of her father and her faith, Rebecca is left to deal with how to keep their home and their belongings. The bank is about to foreclose on their home, and she doesn’t want to have to give up what her and Mike built for their family.

Meanwhile, Pastor Williams begins working behind the scenes to help Rebecca in any way he can. Rebecca tells Grace they have to have an estate sale to make money to try to keep the house. Grace is upset, but understands and tells her mother the only thing she doesn’t want to sell is Faith.

When Rebecca doesn’t make enough money to keep the house through the estate sale, she goes behind Grace’s back and sells Faith. Grace is angry at her mother, as she catches the rancher who bought Faith, Luke, picking up her horse late at night.

However, Grace losing her horse might be the one thing that brings her back to her faith in God.

RIDING FAITH misses the mark on so many things. The movie tries to utilize flashbacks, but would have been better if it would’ve just told the story from start to finish without going back and forth. The lead actress is overly dramatic from the beginning. The best performance in the movie is by T.C. Stallings (WAR ROOM), who plays the supporting role of the pastor. The music is way too intense for the movie and sometimes overshadows the acting. Finally, the script includes a lot of unnecessary dialogue, which makes the movie seem extremely too long.

RIDING FAITH has a very strong Christian worldview. Faith in God is at the forefront. Also, having hope that He will take care of you, even when life doesn’t make sense, is the main theme. Helping others is also extolled as Rebecca and Grace’s church family helps them in their time of need. RIDING FAITH does have a few scenes where the mother and daughter have a dysfunctional relationship. RIDING FAITH is a wholesome Christian movie, but the execution leaves something to be desired.