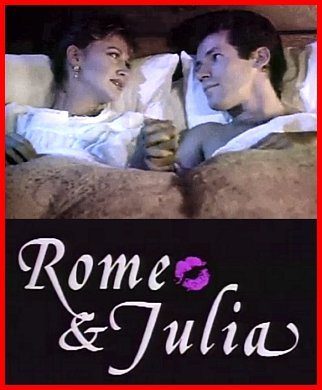 Leave it to contemporary filmmakers to re-write a Shakespearean classic into a "comedy of eros" with two lovers dying of a rare blood disease. Of course, this subject is more distressing than entertaining, and the movie points to a hidden political agenda--suggesting that having intercourse with someone with AIDS is worth the risk if you really love them. Also, the film overflows with obscenities, profanities, suicide attempts, crudeness, intercourse, transvestism, occultism, substance abuse, mocking Christianity, and gambling.

ROMEO & JULIA is a “comedy of eros” spoof of Shakespeare’s tragedy about Romeo, a practical joker at an advertising agency. When Romeo’s prank suicide turns into a bad joke, two co-workers turn the tables on him. Tony and Jake hire a fake doctor to tell Romeo that he has a deadly blood disease–referred to as “It,” but “It” is probably AIDS. Meanwhile, Julia is a hypochondriac who straps screaming clients into a sauna casket at the local health spa. Julia discovers she also has “It.” They go separately to the Manhattan Bridge to jump and instead discover each other and their mutual predicament. The movie continues as ROMEO & JULIA fall in love. Their romance whirlwinds to Long Island, where they discover they aren’t sick (although each continues to believe the other still is).

Although ROMEO & JULIA presents itself as a comedy, the subject of blood disease (such as AIDS) is more distressing than entertaining. Also, the movie has a hidden agenda–suggesting that fornicating with someone with AIDS is worth the risk if you love them. Also, the film overflows with obscenities, profanities, suicide, crudeness, fornication, transvestism, occultism, substance abuse, and gambling.