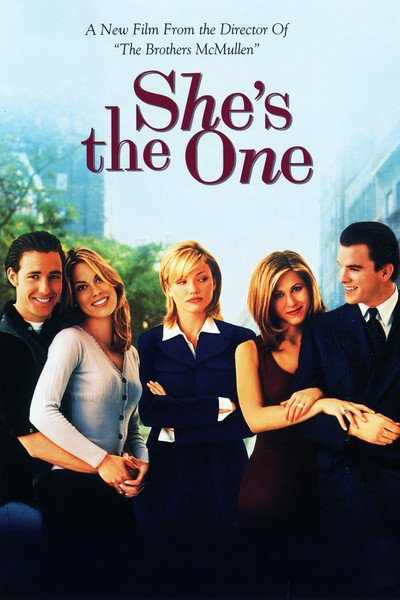 With a bigger budget and a name cast, SHE'S THE ONE is a fine effort by Ed Burns, the director of independent favorite, THE BROTHER'S MCMULLEN. Showing the use and misuse of Catholicism in relationships with the opposite sex, it reveres God and prayer and shows rewards for fidelity and regrets for infidelity. While these young men have a Catholic faith, their marital struggles and use of foul language are testaments that the influence of God in their lives could be a lot greater.

In SHE’S THE ONE, Ed Burns plays Mickey Fitzpatrick. He is a happy-go-lucky vagabond and works as a cab driver in Brooklyn. His younger brother, Francis, has a Wall Street job, but is completely miserable. One day, Mickey picks up an attractive young woman named Hope in his cab, and 24 hours later, they get married. Poor, the two are obviously in love. Francis, however, hasn’t had a relationship with his attractive wife Renee in months. He is in fact secretly having an affair with Mickey’s former girlfriend, Heather. When both frustrated wives discover Heather’s presence, the women leave their men, and in the end, only one of them returns.

There is a lot to like about SHE’S THE ONE. It has constant tension creating conflict and drama. It has snappy dialogue. It shows sexual about a very sexual issue: marital fidelity. Furthermore, the Fitzpatrick father loves his sons. He tells them their mother is praying for them, and during a moment of anger, he tells them to not bash the church under his roof. The movie demonstrates the futility of adultery and tells that marriages are a holy sacrament to God. While these young men have a Catholic faith, their marital indiscretions and use of foul language are testaments that the influence of God in their lives could be a lot greater.