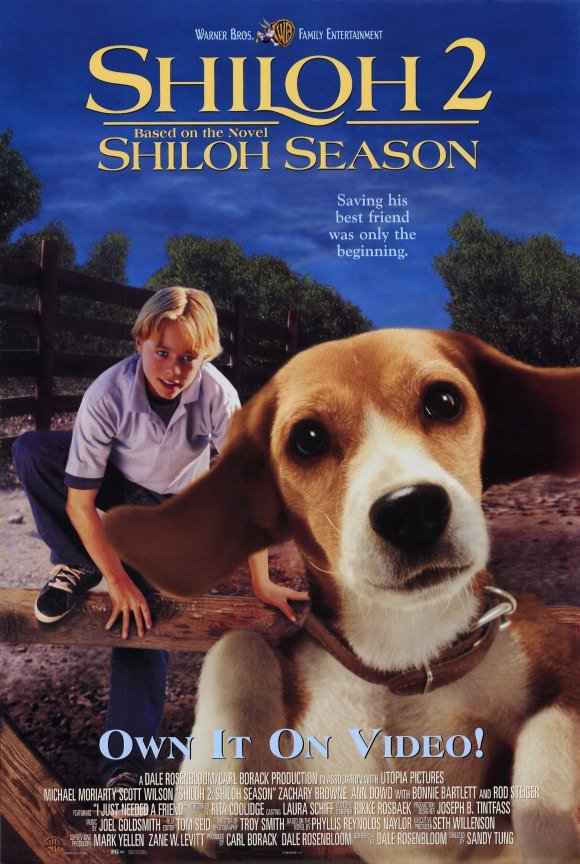 In SHILOH 2: SHILOH SEASON, 12-year-old Marty Preston must protect his whole family from the mean-tempered former owner of his beloved dog, Shiloh. Marty eventually decides they should win the man's friendship through acts of love and kindness, a biblical theme that makes this enjoyable story a unique family movie. Marty also prays to God for help in one scene.

For some reason, few family movies, even very successful ones, are made into sequels that are released theatrically. It's important, therefore, to support the ones that are, especially if they are as morally worthwhile as SHILOH 2: SHILOH SEASON.

Strong moral worldview about overcoming evil with good including a redemptive prayer to God for help in changing a man's sinful behavior, though Jesus Christ is not mentioned; 5 mild obscenities (including several references to "poop") & 1 mild profanity ("Oh, my Lord"); very mild off-screen violence with sound effects such as man shoots squirrel & man wrecks truck, plus threats of violence & dogs chase girl, with one biting her ankle; alcohol use & drunkenness; and, children spy on man, gossiping & man falsely accuses other people, all of which are effectively & strongly rebuked by dialogue & by depicted behavior.

SHILOH 2: SHILOH SEASON is a follow-up to 1997’s SHILOH about a boy named Marty who befriends a hunting dog, Shiloh, when it’s beaten by its beer-guzzling, foul-tempered owner, Judd. In the first movie, Marty hides Shiloh from Judd, but eventually works for Judd so he can buy the dog from him. In the sequel, Judd still thinks of Shiloh as his own dog and is drinking even more heavily. He falsely accuses Marty of deliberately scratching his red truck and smashing his mailbox after Marty and his friend, David, spy on Judd and see him shoot a squirrel out of season. Judd also falsely accuses Marty’s father, Ray, of putting his son up to the delinquent behavior.

One day, someone lets Judd’s three hunting dogs loose and they terrorize one of Marty’s sisters, who gets bitten. The authorities quarantine the dog to make sure it doesn’t have rabies. This further exacerbates the tension between Judd and Marty’s family. More false accusations fly. Even the children in Marty’s class start gossiping about Judd, but their teacher gives them a lesson on how to tell the difference between truth and gossip, urging them not to gossip. Marty prays to God to help Judd have a better attitude so he will be nicer to other people. Eventually, an accident gives Marty and his family an opportunity to reach a friendly hand out to Judd. Will he accept their offer of friendship and bury the hatchet?

Judd presents quite a scary figure in the first half of SHILOH 2. Thus, the movie’s intended audience seems to be age 9 or older. The second half of the movie advocates lots of good moral values, however. The characters pursue truth, rebuke gossip, show kindness, and repay evil for good. Although neither Jesus Christ nor the Bible are mentioned, Marty asks God to change Judd. Marty then proceeds to use biblical principles to help Judd to change. This gives a strong redemptive aspect to the second half of the story.

Children and adults will enjoy this unique family movie, especially the scenes with the dog, Shiloh, who’s a very appealing little fellow. More playful scenes with the dog and Marty’s family should have been added, however, to relieve the intense dramatic conflict of the first half of the movie. In spite of this, fine acting by Scott Wilson as Judd adds greatly to the scenes of conflict, confrontation and redemption in the movie’s more enjoyable second half. Thus, SHILOH 2: SHILOH SEASON builds to a satisfying, uplifting ending.

Writer: Dale Rosenbloom BASED ON THE NOVEL BY: Phyllis Reynolds Naylor