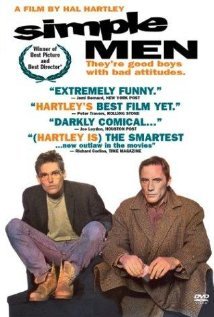 SIMPLE MEN is the story of two brothers, one a streetwise criminal, the other a disenchanted philosophy student, who team up to locate their mysterious father. SIMPLE MEN tries to be an existentialist drama about the meaning of life and love, but its foul language, impersonal sex and pervasive hopelessness leave nothing of substance to offer an audience.

SIMPLE MEN is a simple-minded movie lacking emotion, conflict and integrity. Two very different brothers, Bill, a streetwise criminal, and Dennis, a disenchanted philosophy student, reluctantly team up to locate their father, William McCabe. McCabe is a legendary ex-baseball player turned terrorist who has just escaped from prison. Dennis is determined to find William before the police do. What starts as a quest for their father quickly disintegrates into a slow-moving road movie full of oddball characters and weird situations. Bill has lost faith in everyone and everything but himself. Dennis, on the other hand, uses their time together to establish a friendship with Bill, and also searches for the meaning of his own existence.

Everyone in this film is suffering from chronic depression. Boredom, monotony, and blandness–these are traits that all of the characters have in common. It is as if none of them have any reason or motivation for living, but simply exist as beings in an incomprehensible universe. The biggest reason that these characters are hopeless is that none of them have any comprehension of God. Without the light of God in their lives. SIMPLE MEN has little to offer an audience, since its uninspired plot, plodding direction, minimalist dialogue, and existentialist message rambles along without ever offering meaningful insight into the human condition and the spiritual nature of the universe.