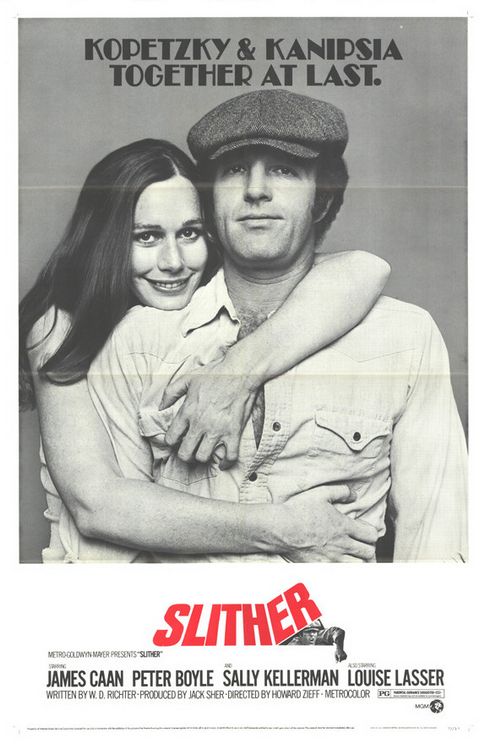 SLITHER is a violent, obscene monster movie about a slug creature with a hive mind that invades the small town of Wheelsy by hitching a ride on a meteor. The stinger inside the monster's egg infects a rich man named Grant, who begins acting strangely. Grant starts changing into a huge part-human slug that eats livestock. It also impregnates one of the town's loose women. The new police chief, Bill, who has a thing for Grant's wife, Starla, chases the monster, but the other woman explodes and releases hundreds of red maggots that begin infecting other people. It's up to Bill to stop this alien invasion before these monsters kill every living mammal and reptile on earth.

Though tongue-in-cheek, SLITHER has a classic science fiction monster plot, but it is extremely gross, gory and violent. The movie contains strong sexual content and an excessive strong foul language. Finally, it has a very strong, cynical, humanist worldview that promotes the false theory of evolution. The movie mocks Christianity, including Christian morality. SLITHER resembles its gross-looking monsters. Moral moviegoers will find that the movie and its monsters are unfit for humans.

(HHH, EvEv, AbAb, LLL, VVV, SS, NN, AA, D, MM) Very strong humanist worldview, done in a satirical tone, with strong evolutionary elements stressing "survival of the fittest" (a false tautology), plus strong, overt anti-Christian elements also done in a satirical tone; at least 78 mostly strong obscenities (many "f" words), 14 strong profanities and blasphemies, 10 light profanities, and much scatological humor; extremely gory and bloody, very graphic, and scary violence includes worm creatures pierce people's bodies, man cleaved in two and his guts and brains spill out, many point blank shootings, infected woman explodes, red maggots attack people with much blood, cow sliced to death, animal corpses, and rotting flesh; depicted alien impregnation of a human woman in one scene and many other sexual references in the dialogue; brief upper female nudity in at least one shot, upper male nudity and woman in shower shot from behind but foggy window obscures rear nudity; alcohol use and drunkenness; smoking; and, irreverent attitude throughout and practically any sense of morality is expunged in favor of a survival of the fittest mentality.

SLITHER is an ultraviolent, extremely gory monster movie with a unique satirical tone, but it’s done in a totally irreverent, coarse way that offends all moral sensibility. Regrettably, this obscene movie will attract many teenage moviegoers who shouldn’t see it, and the movie’s cynical, humanist worldview probably will succeed in further corrupting society, including children.

The movie is set in a small town in the United States. Grant, the rich but older husband of a younger woman, gets upset when his wife, Starla, rebuffs his sexual advances one evening. Angry, Grant goes out to a bar, where he meets another younger woman. Out in the woods, the couple encounters a gross-looking, cracked egg that hitched a ride on a meteor and fell to earth. A stinger from the egg inserts itself into Grant and invades his brain, but Grant seems to be okay on the outside.

Later, Grant starts changing into a half-human slug creature that kills pets and livestock. Before he really changes, however, he impregnates and kidnaps the woman he met in the bar. The new chief of police, Bill, who has a thing for Grant’s wife, Starla, takes a posse to chase after the creature, who keeps escaping. They find the kidnapped woman, but she has grown into a humongous mass of flesh. The woman explodes and unleashes hundreds of small red maggots that try to infect and eat every living thing around. Can the chief stop these monsters and their hive mind before they kill him and every other living thing in the town and on earth?

Though tongue-in-cheek, SLITHER has a classic science fiction monster plot, but, as noted, SLITHER is extremely gross, gory and violent. It also contains strong sexual content, brief nudity and an excessive amount of strong foul language. Finally, the movie has a very strong humanist worldview, with some pro-evolution content, that mocks Christianity, including Christian morality. The movie resembles its monsters. Moral moviegoers will find both the movie and its monsters are unfit for human consumption.

The fact that this sickening, obscene movie has a humanist, pro-evolution worldview clearly demonstrates the logical, moral, philosophical, and scientific bankruptcy of atheism and the false theory of evolution. Regrettably, there are a lot of really sick, misguided atheists and pagans in the world who enjoy such obscene, gross material. Many of these Non-Christians will see nothing wrong with the movie’s excessive violence and vulgarity, but they will be sadly mistaken.