"A Messy World Needs a Savior" 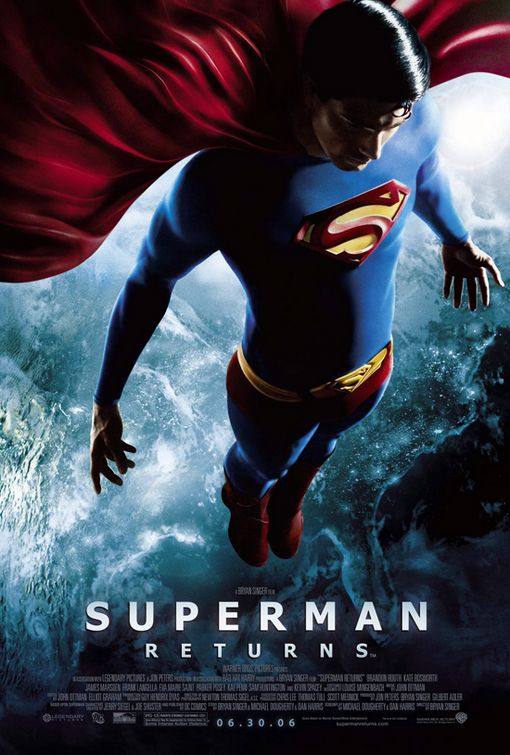 In SUPERMAN RETURNS, Superman has left earth to find the remains of his father’s planet, Krypton. He returns to earth only to find Lois Lane living with Richard White, a relative of the Daily Planet’s Perry White, and with a five-year-old son. After saving Lois from an out-of-control plane, Superman discovers that his arch-enemy, Lex Luthor, has stolen the crystals from the Fortress of Solitude. Luthor is using the crystals to create a new continent and threaten the world. This sets up a final confrontation with Superman that involves his passion and perhaps resurrection.

SUPERMAN RETURNS is one of the most clearly Christological allegorical movies ever. It is also an entertaining big-budget movie with beautifully executed special effects. Though Brandon Routh as Superman is no Christopher Reeve, he is well built and exhibits innocence. Kevin Spacey as Lex Luthor is simply terrific. The movie’s Christological symbolism will cause a lot of theological discussion, but there is some light foul language and references to cannibalism and a child molester. SUPERMAN RETURNS is set in a darker contemporary world. Even so, Superman is clearly still a person who sacrifices himself for others.

(CCC, BBB, Ab, L, VV, S, N, AA, D, M) Very strong Christian, moral worldview with discussions about people asking for a savior, a clear representation of the Passion, clear savior symbolism, but spoiled by an improper relationship and hints of a lack of purity and integrity, and villain says god is selfish and won’t share his power, referring to Superman; five light obscenities and four light profanities; lots of action violence with little blood, including Superman stabbed with kryptonite, Superman kicked and punched brutally, people in car wrecks, objects fall on people, people shot by robber with modern Gatling gun, people tossed about by growing crystalline structures, woman tossed about violently in a plane, woman and child shoved around by criminals, and dog cannibalizes other dogs; passionate kissing and hugging, heroine living with man for several years and reference to one villain being a child molester; upper male nudity; heavy alcohol use; smoking; and, anger, resentment and revenge rebuked.

SUPERMAN RETURNS is one of the most clearly Christological allegorical movies ever made. It is so clear that it even has a discussion about the world’s need for a savior.

When Superman disappears, Lois Lane has written a Pulitzer Prize-winning newspaper article stating that the world doesn’t need Superman. When Superman returns after trying to find the remains of his home planet, he takes Lois above Metropolis to ask her whether the world needs a savior. When she says it doesn’t, he asks her why, then, are so many people praying and asking for a savior.

Later in the movie, Superman’s arch enemy, Lex Luthor, equates Superman with ancient mythological gods and condemns him for being too selfish to share his power. The movie also contains a Passion sequence where Lex Luthor stabs Superman in the side, just as Christ was stabbed by the Roman spear. Thus, the story of SUPERMAN RETURNS involves Superman coming back to find a world that needs him, but a world where people have moved on and lost faith in him, as Lois Lane contends.

Lois now lives with her son and Richard White, whom she has not married. Clearly, she loves Superman but she’s angry that he disappeared without telling her. She is reunited with him when the test flight of a new airliner carrying the a commercial version of the shuttle goes awry, and Superman has to save her and the other reporters. The reason the flight has gone awry is that Lex Luthor, released from prison, has found Superman’s Fortress of Solitude, stolen the Krypton crystals and is experimenting with growing Krypton crystals so he can grow his own continent. When the crystal first starts growing, it shuts down the power grid throughout the eastern United States.

Lex Luthor integrates kryptonite into the structure of his emerging continent. This sets up a final confrontation with Superman that involves his passion and perhaps his resurrection.

SUPERMAN RETURNS is a big-budget, entertaining, special-effects movie. Like many such movies, the hero is only as good as the villain, and Kevin Spacey’s performance as Lex Luthor is terrific. Spacey adds a touch of tongue-in-cheek self-awareness that makes his character more interesting. No matter how mean-spirited his jokes are, they are funny.

The new Superman is not Christopher Reeve. He seems a little uncomfortable in places, which can be rationalized because Clark Kent is supposed to be uncomfortable. This reviewer’s biggest complaint is that he looks a little bit like Groucho Marx when he puts on his glasses, but he is well built and has a degree of innocence.

People will still want to know if Superman is still true blue, honest, trustworthy, etc. For the most part he is, except for the dark cloud of his relationship with Lois Lane and her son. The filmmaker fails to remind us that Superman and Lois were married in SUPERMAN II, before he realized that marrying Lois put her life in jeopardy and thus forced him to make her forget the night of bliss with him when he relinquished his powers to become a mere mortal. Without this background, one prominent reviewer felt that Superman was compromised by the hint of hanky panky.

Even if the major plot device can be explained from a former SUPERMAN movie, SUPERMAN RETURNS is set in a more contemporary world where Lois Lane is living with a man without the benefit of marriage. Another reviewer said this gives the wrong impression to kids about marriage. Furthermore, Superman gets discouraged and goes to a bar with Jimmy to drink away his pining for Lois.

Also, there are a few lightweight obscenities in the movie and four light profanities. One of Lex Luthor’s twin puppies evidently eats the other in an act of cannibalism. One of Luthor’s henchmen is referenced as being part of a group of clown child abusers. So, when the henchman starts playing the piano next to Lois Lane’s son, there’s a sense of jeopardy. Clearly, things are a little bit more muddled than they were in the 1980s when the earlier Superman movies were made.

Even so, Superman is clearly a person who sacrifices himself for others. His father has sent his only begotten son to save this crazy, mixed-up world. With honor, valor, loyalty, and honesty, he does just that.

SUPERMAN RETURNS delivers the kind of jeopardy, danger and excitement required for a big-budget action movie. The premise is clear, and the special effects are beautifully executed. The director sometimes avoids showing the action sequence in order to concentrate on the dramatic relationships, so some people may miss the action of the first SUPERMAN movies. Overall, SUPERMAN RETURNS is a good entertainment value that will cause a lot of theological discussions, but MOVIEGUIDE(r) urges caution for children 12 and under.