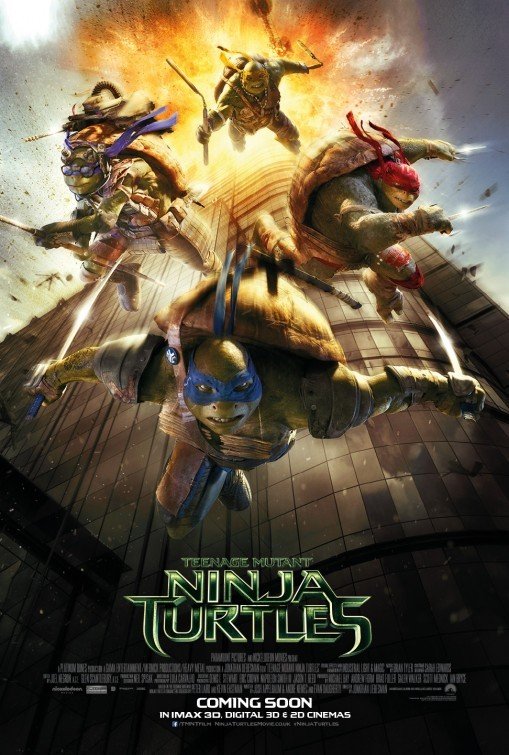 TEENAGE MUTANT NINJA TURTLES is an exciting, funny action movie. An evil gang called the Foot Clan Gang because they step over people while trying to take over New York City. April, an ambitious young reporter, wants to get out of doing fluff pieces for a local TV channel into serious reporting. She wants to expose the Foot Clan and the mysterious vigilante who’s foiling the gang’s plans. April discovers the vigilante is actually four six-foot-tall mutant turtles trained in martial arts. April and her ninja friends must stop the gang who want to take over the city by releasing a deadly toxin and pretending to cure it.

(BBB, CC, Pa, FR, L, VV, D, M) Very strong moral worldview with some strong spiritually uplifting, redemptive content where bad is bad and good is good and adolescents need to grow up and accept responsibility, with obeying the rules, forgiveness, respect, honor, self-sacrifice on many powerful levels, with very little New Age, Eastern pagan martial arts false religion and any time the martial arts are mentioned, it’s done with a real acknowledgement of self-defense and learning responsibility, except for the villain, who talks about a great magician, but evidently not too great to be defeated by the good guys, and the creation of the turtles and their mentor is explained in a bio-chemical, not metaphysical, way; four light obscenities (d***, bada** and a**es) and one possible light profanity such as MG, plus a light “butt” vulgarity; strong action violence includes lots of martial arts punching and kicking, martial arts sword fighting, one villain dressed in a robotic fighting suit has sharp knives and small swords attached to his hands and fights with them and sometimes launches them at the good guys, a chase scene ; no sexual immorality or similar salacious content but man wants to date pretty woman and mutant turtle keeps trying to attract the woman’s attention because she’s “hot”; no nudity; no alcohol; no smoking or illegal drugs, but there’s a use of adrenaline to save the good guys whose blood is being drained and the adrenaline gives them an “adrenaline high” for a brief period, but the effects wear off quickly; and, adolescents disobey their adoptive father but everything works out okay, a shot before the end credits shows two of the large mutant turtles hiding on the bra portion of a Victoria’s Secret billboard ad, villains hold civilians hostage but their plan is thwarted, and one of the villains is a businessman, but it’s not meant in an anti-capitalist, politically correct way attacking free market or conservative values.

The exciting action adventure ensemble of movies like MARVEL’S THE AVENGERS meets the silly fun and comical misadventures of THE MUPPETS in the new version of TEENAGE MUTANT NINJA TURTLES. Full of tongue-in-cheek humor, great jeopardy, perilous action, and terrific character insights, TEENAGE MUTANT NINJA TURTLES is one of the best-plotted popcorn movies in recent memory.

The beginning gives the backstory of the turtles and how they got to be humanoid without the usual didactic, long-winded openings in many fanciful stories. Quickly, the movie moves into high gear.

There is an evil gang called the Foot Clan Gang because they step over people while trying to take over New York City. A very ambitious young female reporter, April, wants to get out of doing fluff pieces for a local TV channel and into serious reporting. Her partner, Vern, who drives the TV truck, just wants to date her. April, however, wants to find out about the Foot Clan. In doing so, she sees this incredibly strong vigilante stopping an arms smuggling heist on the docks of the Big Apple.

While covering a police ball, April hears the wealthy Eric Sacks, who used to be her late father’s partner, discuss his goal of protecting and saving the city. The Foot Clan holds some hostages in the subway. April tracks the mysterious vigilante, who turns out to be four six-foot-tall speaking turtles. When she says something like, “So, you’re teenagers who are mutant turtles who know ninja,” their reply is, “Well, that sounds awfully silly when you say it that way.”

Nobody believes April’s eyewitness story at the TV channel, so she goes to visit Sacks, who does believe her. April also tracks down old footage of her father experimenting on four turtles and a rat. Now, the game is on.

Eric asks April to find the mutant turtles. When she does, their mentor, Splinter, tells April that Eric is actually the villain. He also tells the four adolescents that April rescued them when Eric killed April’s father. Before you can say, “Cowabunga,” Eric’s evil legions come to capture the turtles and drain all their blood to get the mutant serum. One turtle escapes and teams up with April and Vern to rescue his brothers and stop the destruction of New York.

TEENAGE MUTANT NINJA TURTLES has some very funny moments, such as an elevator scene where the turtles start to play imaginary instruments to the elevator music, just like a bunch of teenagers would. The banter among the turtles and among the humans is funny. In fact, some of it is just laugh-out-loud enjoyable. Megan Fox can act (which is quite surprising) and doesn’t just rely on her natural attributes. At a press conference MOVIEGUIDE® attended, she said having actors on set to perform as the turtles helped immensely.

Some of the adventure scenes are classic filmmaking, such as a chase through the snow-covered hills in New York. In fact, the snow chase scene is probably the best action sequence of the whole year, not just the summer. Of course, if you examine the scenes too carefully, you could ask silly questions like, how could they survive. These questions would be just as silly as if asking if the mutant turtles are aliens. As April says, that would be absurd, because they’re turtles!

So, get over it. TEENAGE MUTANT NINJA TURTLES is lowbrow but exciting entertainment with highbrow values. After some clunky action adventure movies, it’s nice to see a movie as well crafted and as clean as TEENAGE MUTANT NINJA TURTLES. Even better, it has a very strong moral worldview with redemptive elements where bad is bad, good is good, and adolescents need to grow up and accept responsibility. There are some scary moments, however. Also, the menacing henchman called Shredder is a scary character. So, MOVIEGUIDE® advises caution for children, especially younger ones.