THE AFFAIR OF THE NECKLACE 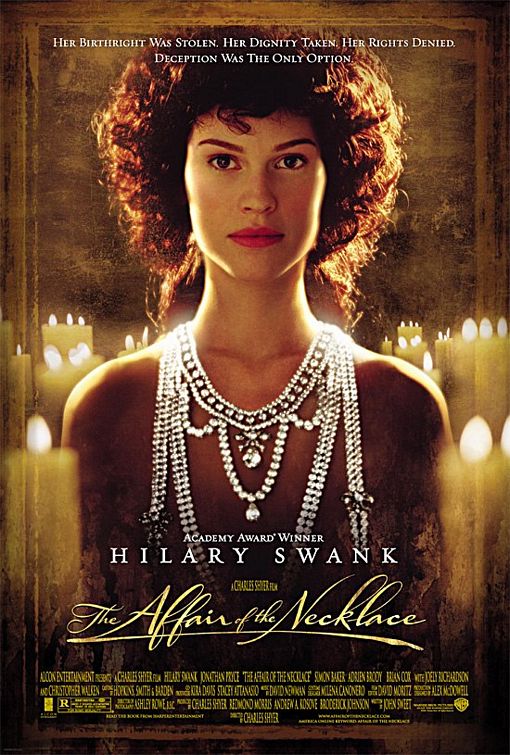 AFFAIR OF THE NECKLACE fails to prove Napoleon’s contention that the affair of the necklace caused the French Revolution. Oscar winner Hilary Swank stars as Jeanne, a woman who tries to buy back her father’s estate by stealing a diamond necklace from a corrupt Cardinal just before the French Revolution. With help from a gigolo, Jeanne draws a famous occultist into her scheme. The scheme results in Jeanne on trial for trying to defraud the Cardinal and Marie Antoinette, the infamous Queen of France.

There are no heroes in THE AFFAIR OF THE NECKLACE, and nothing moral. The frauds, the gigolo and the mistress are the protagonists, but their actions are just as rotten as the villains, if not worse. The acting and direction are laudable, however. In spite of her physical limitations, Hilary Swank becomes endearing as Jeanne. Jonathan Pryce is priceless as Cardinal Louis. Joely Richardson is superb as Marie Antoinette. Otherwise, THE AFFAIR OF THE NECKLACE also contains strong anti-church elements, a mocking humanist, Marxist undertone and strong sexual immorality, including an orgy scene. This sordid tale deserves to be relegated to the dustbin of forgotten films.

Warner Bros. is billing THE AFFAIR OF THE NECKLACE as “a saga of celebrity and sex, greed and desire, corruption and temptation.” If that is not enough to turn off most moviegoers, then the fact that it is missing a plot, the reasons for its premise, and any moral virtues should.

AFFAIR OF THE NECKLACE seems to be a movie made to prove a statement by Napoleon that there were three factors that caused the French Revolution – the defeat of Rossbach during the Seven Year War, lack of intervention in the Dutch Netherlands and “le affaire de collier” (the affair of the necklace). After positing this statement at the beginning of the movie, the movie proceeds to do nothing to show why the affair of the necklace brought down the French monarchy. Of course, there are some hints, but the movie misses its own point and becomes unbearably muddled in the process.

The movie opens in 1786 with the jeweler’s intricate construction of the necklace and then proceeds to tell the audience the story that the audience about to see as Jeanne de le Mott-Valois stands trial for defrauding the Queen, Marie Antoinette, and/or Cardinal Louis de Rohan.

The movie flashes back to 1767 showing the venerable Count de Valois with his little daughter Jeanne. As they enjoy an afternoon in the woods, the soldiers of the monarchy come to arrest him for speaking out against the monarchy and speaking up for the common man. Jeanne watches in horror as her father is beaten senseless and her home is destroyed.

Flash forward to 1784 as the gigolo Reteaux de Vallette, the bastard son of Louis the XIV’s famous mistress, Madamme Dubarry, watches one of Marie Antoinette’s infamous plays in which Marie Antoinette starred. He notices Jeanne enter the opera house and is immediately taken with her despite her lack of attractiveness. Since everyone in the theater is ugly, except perhaps the Queen, Jeanne may be the best there is.

Reteaux tries to follow Jeanne after the play and revives her when she falls at the Queen’s feet. He discovers that Jeanne has been trying to get the Queen to notice her so that she can appeal to the Queen to have her title and lands returned to her. The house minister tells her this is impossible. Reteaux tells her he can help her. Together, they cook up a scheme to get the evil Cardinal Louis de Rohan to secretly buy the world’s most sumptuous diamond necklace for the Queen.

Cardinal Rohan is known for his debauchery. The Queen has shunned him, but he has great ambition to be Prime Minister, in the manner of Cardinal Richelieu. When Jeanne comes to him, he tries to force her to give him oral sex. She talks her way out of it. He arranges for her to meet a famous occultist, a member of the Illuminati, Count Cagliostro, whose seances will bring out the truth. Jeanne sees through Cagliostro and draws him into the conspiracy so he can help her get the Cardinal to buy the necklace.

Their foul scheme works. After the Cardinal buys the necklace, Jeanne, her lover Reteaux and her husband steal the necklace from the Cardinal and start selling the diamonds so that she can buy back her family estate. The house minister gets wind of this scheme and arrests the Cardinal. The Queen is embarrassed by the trial, and the movie continues trying to make sense of a very poorly plotted story.

As noted, it is an idea without a premise and a premise without a plot. If that doesn’t make sense, then neither will the movie.

These criticisms aside, the direction is very good. The scenes seem authentic. In spite of her physical limitations, Hilary Swank becomes endearing and even compelling as Jeanne. Jonathan Pryce is priceless as Cardinal Louis. He manifests a lecherous greed that is truly despicable. The best of all, however, is Joely Richardson as Marie Antoinette. She becomes the infamous queen, going from silliness to solipsism in a brief moment.

Even these performances and this direction cannot breathe life into this convoluted story, however. The movie plays like a Harlequin romance gone awry. It has a strong humanist undertone, mocking not just the Cardinal, but also the mother of Jesus, faith itself and even the occult charlatan Cagliostro. The point is, as Jeanne admits at her trial, she hates the Queen because the Queen wouldn’t notice her, a strong dose of Marxist politics of envy if ever there was one.

There are no heroes in THE AFFAIR OF THE NECKLACE, and nothing good. The frauds, the gigolo and the mistresses are the protagonists and thus deserve some recognition as the heroes, but their actions are just as bad as the villains, if not worse.

Perhaps the problem is the movie is based on a book by Jeanne. From watching the movie, it must be that the book is very self-serving. Whatever one’s position about French monarchy, it can only be enhanced by watching this female opportunist try to take revenge. The movie ends with her signing books in London.

This sordid tale deserves to be relegated to the dustbin of forgotten films. If you really want to find out about the French Revolution, get the 1935 version of A TALE OF TWO CITIES. That is a movie worth watching.