"Standing Up for Yourself and Others" 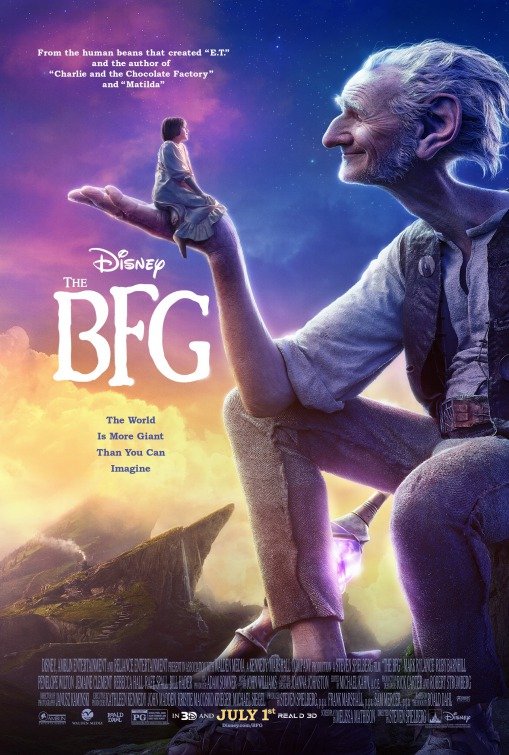 In THE BFG, Sophie lives in an orphanage she hates in London. One night, she sees a giant lurking in the shadows. The giant whisks Sophie away to a magical land where giants live. The giant, whom Sophie calls BFG for Big Friendly Giant, warns her the other giants, who are bigger than he is, are cannibals. So, he must protect her from them. The two loners form a sweet bond, and Sophie encourages BFG to be brave and stand up against the nine mean giants. However, they just might need some help from the Queen of England to do so.

THE BFG is a touching tale of friendship that suits filmmaker Steven Spielberg’s ability to merge fantastical visual worlds with human emotional moments. The movie’s emotional center is its message of friendship, bravery, sacrifice, and standing up for oneself and others, even if you’re quite literally fighting giants. Thankfully, a beautifully light musical score by John Williams cuts the tension. It even adds levity to the scenes with the scary giants. That said, MOVIEGUIDE® advises caution for younger children for THE BFG.

(BB, C, Pa, V, AA, M) Strong moral worldview of friendship, bravery, hospitality, sacrifice, and standing up for oneself, and for others, with a Christian allegorical parallel of a powerful, but gentle being who hears our heart’s desire and gives us our dreams, but the allegory only goes so far, and moment of magical thinking; no foul language, but a running gag about passing gas is included; the prospect of children being taken by giants and eaten is throughout, with giants having names like “Childchewer” and “Bonecruncher,” girl has nightmare about being swallowed by a giant, bigger giants bully a smaller giant, and throw him, and [SPOILER] helicopter is used to stop the mean giants; no sexual content; no nudity; no alcohol consumption seen, but drunk Brits walk around the street and are scolded by Sophie; no smoking or drugs; and, main character irresponsibly jumps off a ledge to force her giant friend to reveal himself and catch her, which he does, but there’s nothing else objectionable.

THE BFG is a fantasy movie from Director Steven Spielberg about a little orphan girl who befriends a Big Friendly Giant.

Sophie lives in an orphanage in London, England, but hates it there. A responsible little girl with insomnia, Sophie finds herself awake at night, but she knows not to get too close to the windows, or else she’ll be snatched away like many of the other children are by a mysterious force. One night, Sophie’s curiosity gets the best of her, and she wonders out onto the porch, only to then see a giant hiding in the shadows. The giant snatches Sophie from her room and whisks her away to a land of giants.

The giant takes Sophie to his home, which is large and full of strange and familiar objects. Striking up a conversation with the giant, Sophie says she’ll run away, but he says she’ll only get herself hurt if she does. The Land of Giants has nine cannibal giants, much bigger than him who would love to eat her up, he says. Also, he can’t take her back to London for fear that she would tell everyone about the existence of giants on the “tele-tele bumpkin box.”

Sophie gives him the name BFG or, Big Friendly Giant, because he refuses to eat “human beans,” instead surviving off a ghastly slimy vegetable. One of the things BFG does for “work” is dream-catching. He shows Sophie a fantastical tree hidden away with brightly colored lights floating around like a bunch of fairies. These lights he explains are dreams, and he has the ability to catch them, and then concoct wonderful dreams for children and adults that he delivers at night. Sophie says she never dreams, but BFG can hear her heart’s desire, which is to no longer be alone.

Eventually, the other mean giants catch on that BFG is hiding a human. So, they grow determined to find Sophie. BFG decides he should return Sophie, but she instead concocts a plan where they will convince the Queen of England to help them defeat the mean giants who are snatching children from London.

THE BFG is a touching tale of friendship that suits Spielberg’s expert ability to merge fantastical visual worlds with human emotional moments. While beautifully shot and meticulously designed, the true standout of THE BFG is the wonderful Ruby Barnhill, who plays the feisty, but lovable and sweet Sophie. Her surprising intellectual charm and the BFG’s sweet, though uneducated, antics create a loving friendship between two lonely souls. There are also some very hilarious scenes, especially when BFG has breakfast with the very proper Queen of England.

The emotional and thematic center of THE BFG is its message of friendship, bravery, sacrifice, and standing up for oneself and others, even if you’re quite literally standing up to giants. In an age where culture likes to point out moments where humanity despises outcasts, THE BFG is a bit more optimistic and presents humans as being hospitable, helpful and quite open to help those in need.

On another level, there are some allegorical aspects to the Big Friendly Giant’s relationship with Sophie, and with humans in general. The Big Friendly Giant hears the hearts of children, and gives humans dreams. However, that and his powerful, but gentle presence can only take an allegory so far. Also, the other giants bully the Big Friendly Giant, so he himself must grow from being a pushover to exuding bravery and sacrifice.

There is a moment of magical thinking where Sophie jumps off a second story ledge to force the BFG to come out of hiding and catch her. Allegorically speaking, this is like doing something dangerous to test God. Thankfully, a beautifully light musical score by John Williams cuts the movie’s tension and even adds levity to the scenes with the mean giants, including the prospect of giants eating little children. That said, the idea of giants eating children may be a little too scary for some younger children. THE BFG also contains a running joke about passing gas and a theme about bullying that also warrant caution for younger children.