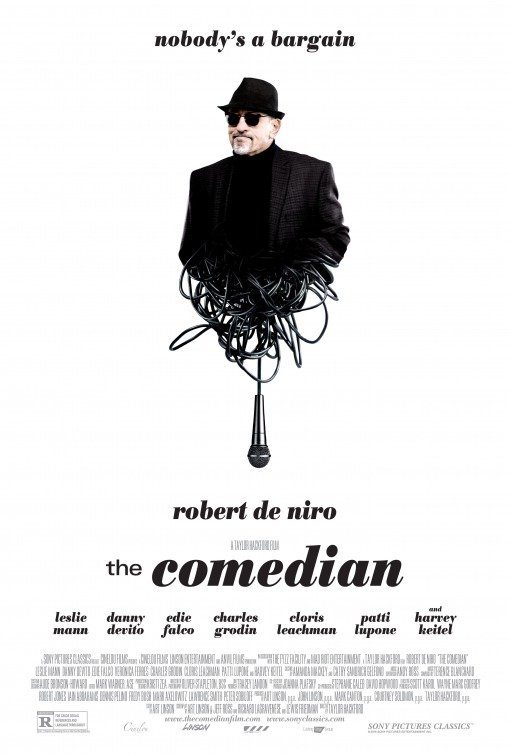 THE COMEDIAN opens with once-famous sitcom star, Jackie Burke, assaulting a heckler during his stand-up routine at a nightclub. JACKIE does a month in jail, but is released to community service. During this time, he meets Harmony, a young woman also sentenced for assaulting her ex-boyfriend. The two hit it off and become close, eventually forming a romantic bond. They provide a support system for each other as Jackie tries to reignite his stalled career. Meanwhile, Harmony comes to grips with the realization she’ll never achieve her dream of becoming a famous actress.

One thing THE COMEDIAN has going for it is a plethora of A-list Hollywood stars. For movie junkies, it’s a joy to see so much talent working on the same project. However, that’s the only thing this movie really has going for it. Not only is the story lackluster, but the main takeaway is the absolute vulgarity throughout. It’s a challenge for this movie to go even 30 seconds without an obscenity of some kind. It’s all meant to come across as funny, but THE COMEDIAN achieves repulsion instead.

(PaPa, HoHo, AbAb, C, B, LLL, V, SS, AA, DD, MM) Strong mostly godless, pagan worldview where characters follow their own desires and largely lack moral standards, with some strong and light homosexual content such as homosexuals are referenced in a couple of jokes and two lesbians have a wedding and are shown together in several scenes, plus Puritans are described as using turkeys as sex objects in one scene, mitigated slightly by some Christian, moral, pro-life content such as one woman wears a cross necklace and is implied to be a Catholic, and a man decides to marry the woman he got pregnant and takes care of his new family; more than 100 obscenities, seven profanities, multiple slang terms used for male and female genitalia, a few bathroom jokes and farting noises, sperm and semen referred to a couple times, a little girl uses the “f” word and a slang term for female genitalia at a school talent show, the middle finger gesture is used, a song about poop is sung; some violence includes a comedian assaults a heckler in the crowd with a microphone, woman dies of a heart attack on stage, a man makes up a story describing how he was sexually abused as a child; strong sexual content includes multiple crude references to sexual acts, many jokes with sexual innuendo, several jokes about incest, a joke about bestiality, man talks about his father molesting him, a couple is implied to be sleeping together, and a joke is made about a porn collection; no nudity; some alcohol use, and one scene shows a slightly drunk couple; a couple scenes depict cigarette smoking, and man talks about his son having died of a drug overdose; and, a man is arrested and serves a prison sentence, a woman’s boyfriend cheats on her, a woman talks about her mother leaving their family when she was a child, a woman considers having an abortion but decides not to do it, an unmarried couple have a baby together, and family members show disrespect for each other in multiple scenes.

In THE COMEDIAN, Jackie Burke is an aging former sitcom star, making a flailing attempt to revive his stalled career by the occasional standup routine at a nightclub, or pitching a new comedy show to skeptical Hollywood executives. One night at a club, Jackie loses his cool with a heckler in the audience and assaults him with a microphone. He spends the next month in prison and is released into community service preparing meals for the homeless.

At the homeless shelter, Jackie meets Harmony, a 30-something failed actress sentenced for assaulting her ex-boyfriend when she caught him cheating. Jackie overhears a heated phone conversation she has with said ex-boyfriend and offers her advice. They cautiously strike up a father-daughter style friendship, and it slowly evolves into something more romantic.

Harmony takes Jackie to a birthday dinner for her wealthy father as a gift. Her father is a huge fan of Jackie’s once popular show. Things quickly go sour when Harmony’s father repeatedly asks Jackie to perform in character. Jackie gets impatient and starts throwing insults across the table.

The next morning, Harmony tells Jackie she’s moving to Florida to work at a retirement village her father owns. Though he’s upset she’s given up on her New York dream of becoming a successful actress, he can’t stop her.

After meeting a series of dead ends himself in the revival of his comedy career, Jackie decides to visit Harmony in Florida and see what her new life is like. He ends up performing a parody song to amuse the residents at the retirement village, which goes viral online. This generates new interest from the entertainment industry, and before long Jackie’s inundated with offers. However, Harmony shares some news with him that puts a kink in his plans.

One thing THE COMEDIAN has going for it is a plethora of A-list Hollywood stars. For movie junkies, it’s a particular thrill to see so much talent working on the same project. De Niro’s star power was enough to involve them all. Sadly, this movie proves De Niro’s talent lies more in the genre of drama than comedy. He never quite sells himself as a comedian (a successful one anyway), and it’s only the movie’s more serious moments where he really seems to shine. The story itself is lackluster, and the characters surrounding Jackie don’t get much opportunity for development.

Ultimately, the main takeaway from THE COMEDIAN is the absolute vulgarity that runs throughout. It’s a challenge for this movie to go even 30 seconds without an obscenity of some kind. Crude sexual references are also common place. At the retirement home, Jackie leads everyone in a parody version of “Making Whoopee” with “Making Poopie.” Apparently, it’s funny to watch a bunch of old people singing about poop. It’s also supposedly hilarious to hear jokes about same-sex marriage, sexual abuse and sex in general – all paired with numerous “f” bombs and just about every other obscenity under the sun. Topics such as abortion, drugs, dysfunctional families, and extramarital sex outside of marriage are all thrown into the mix. THE COMEDIAN’s negative elements are mitigated slightly by some Christian references and a pro-life ending when a woman unexpectedly becomes pregnant.