THE GREATEST GAME EVER PLAYED 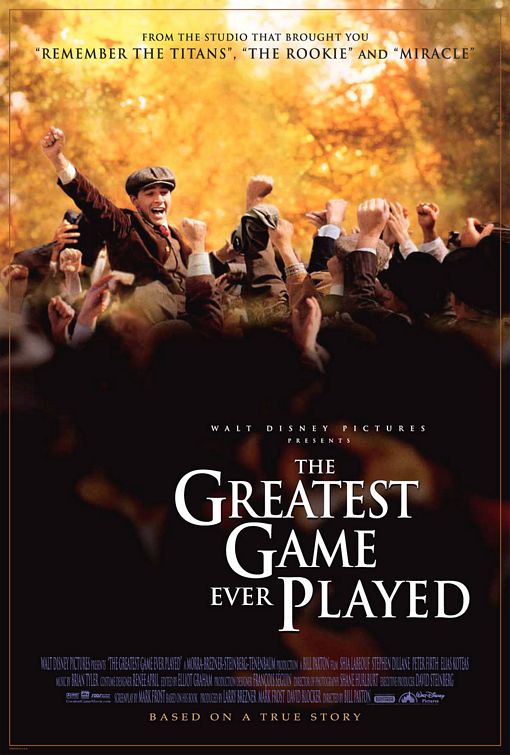 THE GREATEST GAME EVER PLAYED opens in 1879 at a tiny, broken-down cottage called The Vardon Cottage. Little Harry Vardon wakes up to see four stern-looking gentlemen with top hats surveying his property for new golf links. Switch to circa 1910 Brookline, Mass. Francis is a young caddy at a prestigious golf club. His father, a down-to-earth man, makes Francis get a job and stop dreaming about his idol Harry Vardon. Francis has also promised not to play golf. When, however, the 1913 U.S. Open comes to the club where Francis caddies, Francis decides to participate. He is up against the two best golfers in the world, including Vardon. Supported by his mother, Francis goes out on the field of battle to challenge the Goliaths.

THE GREATEST GAME EVER PLAYED is truly wonderful. The movie's structure is flawless. It hits all the right plot points, develops compelling characters and also builds in layers of relationships that should reach out to every audience. It is a father-son movie, a mother-son movie, a buddy movie, a movie about God-given talent, an overcoming insurmountable odds movie, and a story of a young boy facing two Goliaths.

(C, BB, L, V, A, D, M) Light Christian worldview with strong biblical morality emphasizing reconciliation between father and son, recognition of God's talent, understanding the uniqueness of each human being, as well as loyalty, forgiveness, courage, composure, and other biblical virtues, mitigated by ignoring father's advice and seemingly rebelling against father although there's reconciliation at the end; five mostly light obscenities, four exclamatory Oh Gods and My Gods, as well as overt discussion of God-given talent and reference to David against Goliath; man slugs another man in the jaw, man gets hit by golf ball and men break golf clubs; no sexual activity; no nudity; light alcohol use; much smoking; and, classism, xenophobia, and discussions of imperialism by the villains.

THE GREATEST GAME EVER PLAYED is a truly wonderful movie. The structure of the movie is almost flawless. It hits all the right plot points, develops compelling characters and also builds in layers of relationships that should reach out to every audience. It is a father-son movie, a mother-son movie, a buddy movie, a movie about God-given talent, an overcoming insurmountable odds movie, and a story of a young boy facing two Goliaths.

The story opens in 1879 on the Isle of Jersey at a tiny, broken-down cottage called The Vardon Cottage. Little Harry Vardon wakes up to see four stern-looking gentlemen with top hats surveying his property for new golf links. They tell him that golf is only for gentlemen.

Switch to 1900 Brookline, Mass. Francis Ouimet is a young caddy at a prestigious golf club. Both Harry Vardon, 21 years before, and Francis face a strong degree of classism in their desire to play golf. It is a gentleman’s game, and no one else need apply.

Harry Vardon, however, has become a golf sensation. Francis does not know his idol’s common roots, but admires his record of winning. When Harry comes to town, Francis disobeys his father with the help of his mother to see Harry give a demonstration. He goes forward to learn how to hold a golf club.

Years later, one of the members of the club and the elderly golf pro who makes the golf equipment want Francis to participate in an amateur contest. After some finagling, he is allowed to try out for the amateur tournament, but he fails to win a place in the tournament. However, during his brief encounter with the world of the golf club, Francis meets a beautiful aristocratic young woman who takes an interest in him.

His father, a down-to-earth man, believes Francis should get a job and stop dreaming about something he’s not. Heartbroken, he promises his father not to play golf.

The question of his playing golf arises again when the 1913 U.S. Open is to be held at the club where Francis caddies. Initially, he turns down the offer of being the local amateur contender, but on second thought decides to participate. He is up against the best the world has to offer, in particular the two British champions, Harry Vardon, his boyhood idol, and Ted Ray.

When the game starts, Francis doesn’t even have a caddy. A short, rotund little boy named Eddie volunteers to caddy for him. Eddie is the laughing stock of the club. Together, they go out on the field of battle to challenge the Goliaths, supported by the prayers of Francis’s mother and their own God-given talent.

The production quality of THE GREATEST GAME EVER PLAYED is incredible. The special effects bring the game alive in a very powerful way. The music is superb. There are even some very funny, lighthearted moments. Best of all is the direction of the characters. Each one comes alive. Although they are competing with each other, each one is a hero in his own right.

No matter how great this movie is, its success will depend on marketing, timing and the winds of the audience. However, once the word of mouth starts to catch on, it may end up like OCTOBER SKY and a few other very special movies as one of the most beloved movies ever. THE GREATEST GAME EVER PLAYED is one of those movies that makes you fall in love with feature films and their storytelling abilities all over again.

Rent or Buy THE GREATEST GAME EVER PLAYED: