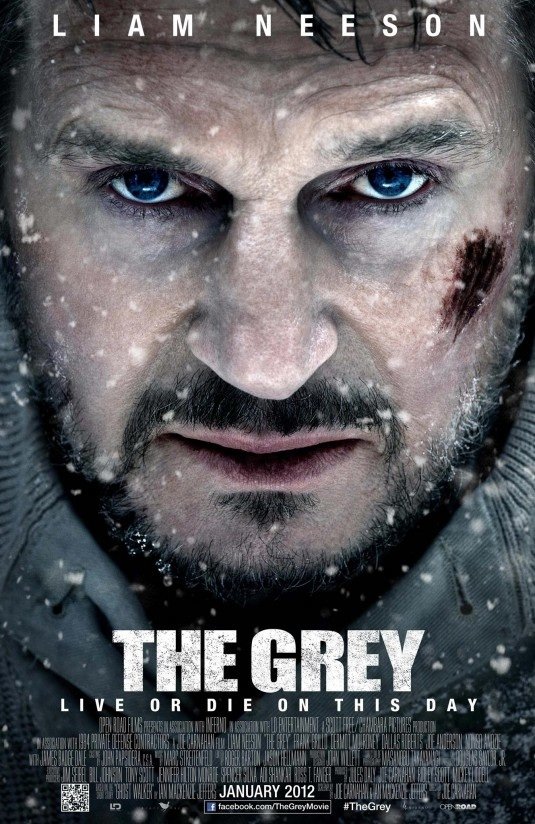 THE GREY stars Liam Neeson as an oilman who gets stranded in an Arctic wilderness with four men when their plane crashes. The men learn vicious, hungry wolves are after them. They must bond quickly if they are going to come up with a good survival plan. As the men work to survive the wolves, the cold and a raging blizzard, they discuss the existence of God and faith. One man is a Christian. Another is an atheist who laughs at the idea of God. The oilman is in the middle. How will this religious debate play out when the men begin dying one by one?

Everything about THE GREY is beautifully shot and harrowingly presented. Even the wolves sound like they’re in the theater. The cumulative effect of THE GREY is depressing. While it sometimes appears to take an Christian tone, it has a disturbing, relentless transition to denying God, faith and prayer. There are also some clear indications of the meaninglessness of life. However, the movie’s constant foul language should have been cut or greatly reduced. THE GREY also has some intense, strong, and scary violence, making it excessive.

(HH, AbAb, C, B, Pa, H, LLL, VV, S, AA, D, M) Strong Nihilistic, Humanist worldview ultimately demeaning and denying belief in God and an afterlife, with very little Christian elements such as prayer and references to Jesus Christ, marred, however, by a pagan use of abundant foul language and some anti-religious comments by two humanists/atheists in debates over God and religion and man shouts out to God in angry, and realizes that there is no God so he has to survive himself; up to 200 obscenities and profanities or more, including many strong ones; strong violence and implied violence includes scenes of wolf attacks on humans, humans fight off wolf attacks, plane crash, man eases dying man’s passing, character drowns, brief drunken brawl, freezing river sweeps away one man trying to escape wolves, and man contemplates suicide with shotgun in mouth; some verbal references to sex with prostitutes; no nudity; alcohol use and scene with a drunken brawl; brief smoking; and, men argue about the existence of God and how best to survive being stranded in a frozen wilderness.

iam Neeson fights with wolves in THE GREY. The movie is survival action-thriller that has atheist characters and a pervasive stream of foul language.

The movie centers on an oilman named Ottway (Neeson), who’s burned out on the harsh, male-dominated and frozen terrain of his job in the Arctic. Desperate to get back with a wife the audience sees in flashbacks, he has written her a note but takes a shotgun out and nearly commits suicide by shoving it in his mouth. He changes his mind in favor of flying home the next day. However, the plane transporting him and other workers crashes in the middle of the snowy wilderness, leaving only himself and four other survivors.

Surrounded by vicious wolves and only known to each other by their last names, the men must bond quickly if they are to form a plan for survival. As they alternate between arguing and friendship while contending with the terrifying prospect of hungry wolves, raging blizzards, and hunger, they speak to each other with pervasive foul language.

Yet writer-director Joe Carnahan, who co-wrote the script with Ian Mackenzie Jeffers based on a short story Jeffers wrote, has a much deeper than expected agenda for his movie. The action elements are the hook to draw audiences into the theater, but he’s crafted a movie that will also make people think that life is meaningless.

For instance, one man in the group of survivors has an ardent faith in God, though he wonders if there was a purpose behind the hardship they’re enduring. Another is an atheist who laughs at the idea of God. Ottway himself is in the middle. He is respectful of others’ faith and invites the believer to make a sign of the cross over one of the men who dies, but he says he only wishes he had faith.

[SPOILERS FOLLOW] As the movie progresses, however, some of the men have visions of loved ones as they die, such as a long-lost daughter embracing one man while another sees the sister he lost in childhood. Ultimately, Ottway is left alone, and yells at the sky, profanely demanding for God to prove His existence with a sign or some help. None comes, so he concludes that there is no God, and survival is up to himself. So, Ottway gets on his feet again and keeps going before finally stopping, dropping to his knees and digging out the wallets of his now-dead fellow travelers, stacking them into a memorial. Finally, we see that his wife had died before his eyes. He is resigned to dying.

At that moment, he hears and sees the alpha wolf, a fearsome black beast coming toward him. A remembered nihilistic poem from his father brings Ottway to his feet as he decides to challenge the alpha wolf in a fight to the death.

Everything about THE GREY is beautifully shot and harrowingly presented. Even the wolves sound as if they’re in the theater with the viewer. The cumulative effect of THE GREY is depressing. The movie takes an atheist position that nothing matters, although there are some overt references to faith.

However, the constant foul language should have been cut or greatly reduced. THE GREY also has some intense, strong, and scary violence. Finally, the nihilistic content destroys any merit the movie might have.