THE KIDS ARE ALL RIGHT

"Repulsive in Almost Every Way" 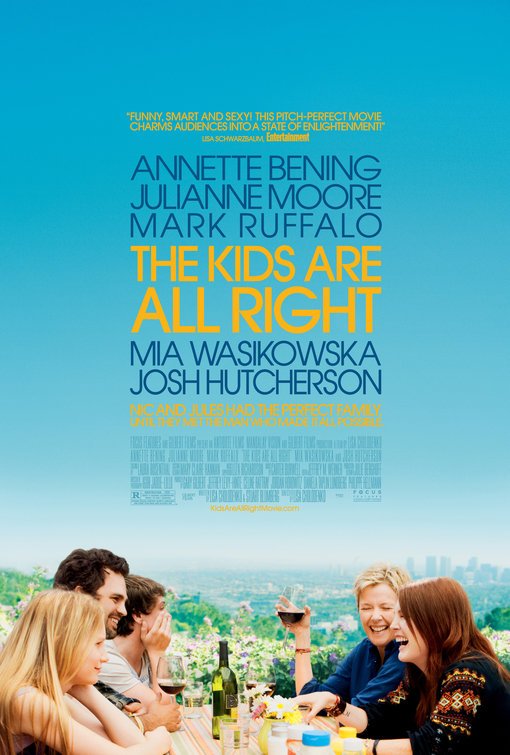 It continues to amaze MOVIEGUIDE® that so many humanist, leftist movies not only have a Non-Christian worldview, but also have so much foul language and other explicit, obscene, gratuitous content. Such is the case with the movie THE KIDS ARE ALL RIGHT. The story is about two lesbian women who have two teenage children because of a sperm donor. The children find the sperm donor, an easygoing restaurant owner who easily ingratiates himself into the hearts of the children and one of the lesbians. He begins a torrid affair with the one lesbian, who suddenly is beginning to chafe at her partner’s strict, no-nonsense personality. When the affair is exposed, hidden tensions in this modern household also are exposed.

THE KIDS ARE ALL RIGHT promotes the message that homosexual families have problems just like traditional heterosexual families, but that, also like traditional families, love and forgiveness can overcome those problems. What actually comes across, however, is that homosexual couples who have children are damaged, perverted people who lack the moral victory that comes when you have a proper relationship with God through Jesus Christ, under the guidance of God’s amazing grace.

(HHH, HoHoHo, PCPCPC, FeFeFe, C, LLL, V, SSS, NN, AA, DD, MMM) Very strong humanist, pro-homosexual, politically correct, confused feminist worldview about a lesbian woman who cheats on her “partner” with the sperm donor of their two children, with some redemptive focus on forgiveness after sins are exposed; about 50 obscenities (including many “f” words), two strong profanities and 16 light profanities; some brief violence includes a slap and a man throws his motorcycle helmet in disgust at himself; very strong sexual content includes lesbians watch explicit male homosexual pornography, plus explicit scenes of depicted fornication and sodomy, and lesbian gives a confusing answer to her son’s question of why she and his other “mother” watch porn movies about male homosexuals; images of upper female nudity, rear male nudity and upper male nudity; alcohol use and drunkenness; smoking and teenage friend of a main teenage character snorts cocaine with him; and, cheating, vandalism, teenager tries dangerous skateboard stunt, lying, spying, landscape designer unfairly dismisses an employee, teenage rebellion, daughter talks back to one lesbian “mother,” and no solid moral compass or foundation.

It continues to amaze MOVIEGUIDE® that so many humanist, liberal, leftist movies not only have a humanist or left-wing worldview, but also have so much foul language and other lewd, gratuitous content. Such is the case with the new independent movie THE KIDS ARE ALL RIGHT.

THE KIDS ARE ALL RIGHT is a despicable, crude, obscene example of the moral perversion running rampant in today’s godless secular humanist society and in the homosexual “community.” As such, it also shows the complete breakdown of morality among most, if not all, liberals and leftists, especially among those who promote homosexual and “transgender” behavior, including the approval and promotion of such evil perversion among the world’s children.

In the story of this odious movie, Nic and Jules are two lesbian partners who have two children, 18-year-old Joni and 15-year-old Laser. Laser wants his older sister to find the man who donated the sperm to Nic and Jules. Joni and Laser’s “bio-dad,” Paul, a restaurant owner who sleeps with his manager, agrees to meet the children.

Not knowing about Paul’s promiscuous lifestyle, the children are drawn to Paul’s easygoing style. Especially in contrast to Nic, a female doctor who sets down strict rules in the house. What they all don’t know is that Jules is also chafing under Nic’s strict rules, including her frequent condemnation of Jules’ own easygoing behavior.

Jules has been looking to start a new career in landscape design. Nic already thinks Jules will fail, but Paul agrees to let Jules re-design his new backyard. Paul’s approval of her work leads to a torrid affair between them. When the affair is exposed, the hidden tensions in this modern household also are exposed.

The main message of this movie, which includes very strong explicit sex scenes and abundant obscene language and doesn’t make much sense, is that homosexual couples and families have problems just like traditional heterosexual ones, but that, like traditional families, love, forgiveness and family bonds can overcome those problems. This is probably what a licentious, lamebrain, loony leftist will see. A media-wise person, however, will discover an obnoxious, obscene movie with unappealing, confused characters. He or she also probably will note that this movie proves that homosexual couples who have children are indeed perverted, damaged, misguided people who lack the moral sense that comes when people accept a biblical worldview, turn away from sin, and continually seek refuge, redemption and salvation in God through Jesus Christ.

Of course, the characters in THE KIDS ARE ALL RIGHT do none of these things. Also, the movie itself contains enough extremely explicit, obscene content that it will turn off any viewer who doesn’t share its leftist, liberal, homosexual worldview. THE KIDS ARE ALL RIGHT is made by radical liberals/leftists for radical liberals/leftists, the kind of liberal/leftist who sees nothing wrong in exposing people to lots of strong foul language and explicit sex scenes with nudity. Its existence, and its reported acclaim at Robert Redford’s Sundance Film Festival, proves that the pro-homosexual liberal/leftist agenda has become morally bankrupt, artistically vapid and intellectually repulsive.