THE OPPOSITE OF SEX 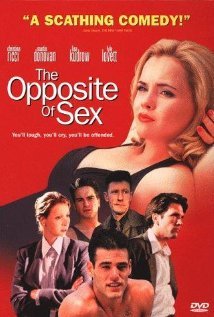 THE OPPOSITE OF SEX is a clever, complex anti-Christian, pro-homosexual diatribe about the consequences of having heterosexual, homosexual and bisexual sex. It concerns the misadventures of a 16-year-old precocious, sexually active girl who emotionally and/or physically seduces and blackmails her older half-brother, his homosexual lover and eventually even his best friend.

THE OPPOSITE OF SEX is a clever, complex, anti-Christian, pro-homosexual diatribe about the consequences of having heterosexual, homosexual and bisexual sex. Director Don Roos, who also wrote the screenplay, fully accomplishes what he sets out to do in this quirky sex farce, but it is an in-your-face kind of filmmaking that is filled with foul-language, endless sexual references and self-serving, negative stereotypes of Christians.

The film is narrated by 16-year-old Dedee Truitt, played by Christina Ricci. A foul-mouthed, conniving, angry teenager, Dedee runs away from her mother in Louisiana to live with her half-brother Bill in a small Indiana town. Played by Martin Donovan, Bill is a dedicated, mature, thirtysomething English teacher on the rebound from the AIDS-related death of his rich lover Tom. Bill has acquired himself a handsome, twentysomething homosexual boyfriend named Matt, played by Ivan Sergei. Bill’s best friend and his late lover’s sister Lucia, played by Lisa Kudrow of TV’s FRIENDS, doesn’t like Bill’s relationship with Matt, but she is even more suspicious of Dedee. Sure enough, before you can say “Sodom and Gomorrah,” Dedee seduces Matt and announces that she is pregnant. She then persuades Matt to steal $10,000 of Bill’s money and travel to Las Vegas and then Los Angeles as newlyweds.

At this point, Matt’s jilted, underage ex-lover Jason, played by Johnny Galecki of TV’s ROSEANN, frames Bill for sexual harassment and intimates that perhaps Bill has murdered Matt. This causes a political sex scandal in the town’s public schools, forcing Bill and Lucia to go on a wild chase in search of Matt and Dedee to clear his name. They are followed by a policeman named Carl, who has unrequited feelings for the bitter Lucia. Regrettably for Matt, Dedee’s teenage lover from Louisiana, a mixed-up self-proclaimed Christian named Randy, is also in Los Angeles and is secretly continuing his sexual escapades with Dedee. Of course, Randy turns out to be the real father of the baby.

Eventually, he and Dedee run away to Palm Springs after Bill refuses to cough up another $10,000, even though Dedee is holding the ashes of Bill’s late lover for ransom. Dedee, however, accidentally shoots Randy to death when they have a fight during an argument. Desperate, she takes advantage of Matt’s good graces, and they disappear. Meanwhile, Lucia and Bill have a revealing discussion about their different feelings about sex and romance, and Lucia begins an affair with Carl. The scandal with Dedee and Matt ends up with Bill losing his teaching job.

Back in Indiana a couple months later, Bill is suddenly confronted by Jason, who says he and Matt need money so they can take Dedee’s soon-to-be-born baby to Mexico with them. The three fugitives figure Dedee is not the motherly, monogamous type, and they are probably right. Jason says he will help restore Bill’s reputation if Bill gives them some money. By this time, however, Bill has had enough of Jason’s attitude. He figures it was older, sophisticated homosexuals like he who made it possible for “grunge” homosexuals like Jason to live their lives any way they want, without those big, bad bullies from “the Christian Coalition” crimping their hedonistic lifestyles. Bill forces Jason to take him to Matt and Dedee, across the border into Canada, with Lucia coincidentally and secretly following them. Bill angrily confronts Matt, but Matt makes Bill realize that Bill never really intended to have a serious relationship with Matt, he only wanted a young sexual partner to ease his pain over his ex-lover’s death. Lucia overhears this conversation and, like Bill, is overcome with grief over her dead brother. Everyone tries to start figuring out how to rectify the mess they are in when Dedee suddenly goes into labor. An elaborate birthing scene occurs at a local hospital, where Carl also manages to show up. Lucia tells Carl that she is also pregnant. Dedee almost dies, but she returns to Indiana with Bill and the baby to face the music.

After a few months in jail, she returns to Bill’s house, but realizes during a brief sequence that the baby is more attached to Bill and his new homosexual lover. On the road again, she muses about sex and relationships. Sex only brings children, disease and relationships, she says. “I want the opposite of all that,” she adds. “It’s not worth it.” She relents briefly, however, as the film shows happy images of Lisa and Carl, Matt and Jason and Bill’s own relationships. The images stop, a couple expletives follow, and Dedee reminds her audience, us, that she will never become a person with a “heart of gold.” Still, “I never was the same again after that summer,” she admits as the movie ends.

THE OPPOSITE OF SEX is the kind of 1990s sexual farce/drama that secular film critics of the religious left will probably love. Director Don Roos has crafted a well-made movie with memorable characters. He includes some provocative dialogue about sex, love and relationships during the serious moments of the movie. Because of its frank sexual content, however, and its anti-Christian, anti-biblical worldview, THE OPPOSITE OF SEX most likely will not obtain monetary success. Moral Americans can be thankful for that. Even so, someone should warn the independent filmmakers who continue making films like THE OPPOSITE OF SEX: God will not be mocked.