"Funny But Flawed Comic Salute to the Average Joe" 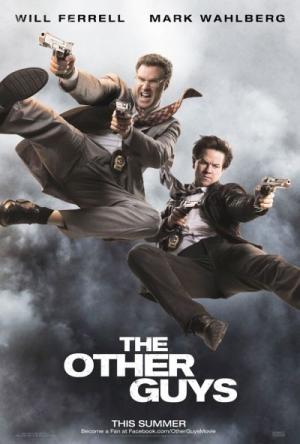 THE OTHER GUYS is an outrageous cartoon salute to the average guy working behind the scenes, especially the average policeman serving society. Two average, mis-matched detectives in New York, Allen and Terry, try to capture the fame of their two recently deceased idols. Mild-mannered Allen stumbles on a Wall Street scam to steal $32 billion. He and his partner, however, have some unfortunate run-ins with the security team for the scammers. Making matters worse, their boss doesn’t believe there’s a scam and doesn’t want them to make unnecessary waves with powerful people. Will these zeroes manage to turn themselves into heroes and stop the bad guys?

Happily, there are a lot of clean, though sometimes goofy, jokes in THE OTHER GUYS. The action violence is pretty wild and funny at times too. Will Ferrell and Mark Wahlberg make a funny team. Michael Keaton is hilarious as their boss. Sadly, there are abundant obscenities in THE OTHER GUYS and a few off-color jokes. Also, the end credits contain some Neo-Marxist, anti-capitalist “share-the-wealth” barbs against overpaid Wall Street CEOs and rich capitalists. Please spare us the political lessons, guys. Just be funny!

(B, PCPC, CoCo, AcapAcap, Ho, LLL, VV, S, AA, M) Light moral worldview in a comic context about police stopping bad guys with some politically correct Communist, anti-capitalist attacks on Wall Street and the rich over the end credits that seem to advocate forced wealth re-distribution, plus two homosexual jokes about homeless men having an orgy in a car but nothing specific is said; 71 obscenities (mostly “s,” “h” and “a” words), one GD and 13 light profanities (e.g., My God, Oh God and two I swear to God) and brief scatological humor in a couple scenes referring to urination; lots of action violence, some of it comic, includes explosions, vehicles crash into storefronts and a bus, car chases, vehicles crash into parked vehicles and other vehicles, gunfire with some people getting hit, two puffed-up conceited police detectives misjudge what they can do and accidentally leap to their deaths, shootouts, falling, comic fighting, man splashes coffee on another man after losing a funny argument, and man goes berserk and smashes up room while playing bad cop good cop; no depicted sex scenes but implied married sex after reconciled married couple take off some clothes and scene fades to another scene, conceited detective mentions he has lots of sexual affairs, some lightly lewd sex messages between married couple, detective is amazed at how “hot” his nerdy partner’s wife is and wants to replace his partner if partner dies, married man briefly seen drinking with women at a bar after wife kicks him out of the house before they reconcile shortly thereafter, two homosexual jokes about homeless men having an orgy in a car but no details (crude or otherwise) are given, cop gives his unmarried partner a gift mug saying “FBI - Female Body Inspector,” and jokes about man’s past in college where he “managed” a “dating service” but man later admits he was a pimp; no nudity but a few shots of female cleavage; photos of detectives in bar getting drunk; no smoking or drug use but cop’s car runs over cocaine and gets smeared with it; and, stealing, attempted stealing but it is foiled, man comically insults his beautiful wife’s looks in fancy dresses but he explains that away later, uncontrolled anger, attempted fraud but it is foiled, and two cops goad detective into firing his gun in the office and his boss replaces gun with a fake wooden one.

THE OTHER GUYS is an outrageous cartoon salute to the average guy working behind the scenes, especially the average policeman serving society. Regrettably, it spoils that message by adding a Marxist, radical leftist, anti-capitalist subtext over its end credits. The movie itself also has abundant obscenities and some occasional off-color, lewd humor.

The story opens with the NYPD’s two star detectives, Detectives Danson and Highsmith, becoming so enamored with their fantastic exploits that they jump off a 20-story building trying to capture some crooks and fall to their deaths. Back at the precinct, mis-matched partners Allen Gamble and Terry Hoitz (played by Will Ferrell and Mark Wahlberg) discuss trying to replace Danson and Highsmith.

Terry is an angry guy trying to jump-start a fading career after he accidentally shot New York Yankee star Derek Jeter. He wants Allen and himself to become the next gun-slinging detectives in the city. Mild-mannered Allen, however, wants no part of that. He’s content using his accounting skills to investigate financial crimes on his office computer.

Terry eventually forces Allen to go with him on a couple risky investigations on the street. They end badly, however, which makes Terry even more angry.

Then, Allen’s investigation of a financial bigwig’s failure to get permits for his all new construction projects uncovers a possible Wall Street scam to steal $32 billion. Allen and Terry’s violent encounters with the security team associated with the scammers are explained away, however. And, the powers-that-be order them to lay off the case, especially since Terry and Allen have no proof of the scam.

Can anything turn these two zeroes into heroes?

Happily, there are a lot of clean, though sometimes goofy, jokes in THE OTHER GUYS. The action violence is pretty wild and funny at times too. Will Ferrell and Mark Wahlberg make a funny team. In one hilarious scene, they get into a funny argument when an upset Terry angrily tells Allen, “If I were a lion and you were a tuna, I’d swim out into the ocean and eat you!” Allen reminds Terry that lions don’t like water and shows him why Terry’s analogy doesn’t work. They get some great comic support from Michael Keaton, who plays their boss, and from Eva Mendes, who plays Ferrell’s wife.

Sadly, though, there are many obscenities in the movie, although there are no “f” words. There are also a few lewd jokes, mostly about Allen’s relationship with his beautiful wife, played by Eva Mendes, and about Allen’s past at college. Allen tells Terry he used to manage a “dating service” at college, but Terry keeps identifying it for what it was – Allen was a pimp. The joke at the end comes when Allen finally agrees with Terry – yes, he was a pimp, he finally admits. It should be explained here that one reason Allen wants no part of Terry’s urge to take on dangerous assignments is that he’s afraid doing that will unleash Allen’s “dark” side which enjoys taking on risky ventures.

All of this material, including the clean jokes, is done in a wild, over-the-top style that screams, “This is a comedy, folks!” Some people won’t like that style, but it can’t be denied that there are indeed some very funny clean jokes in THE OTHER GUYS.

At the end of THE OTHER GUYS, the filmmakers make a sarcastic joke about the Bush, Obama administrations’ Wall Street bailouts, aka TARP. This joke is very incisive, because even many conservatives and libertarians were upset about these bailouts, not just leftists who hate Wall Street. Around the end credits, however, the filmmakers put a lot of colorful, simple charts complaining about extravagant salaries and bonuses to CEOS at large corporations, including some of the major TARP recipients, compared to the pay of the “average worker,” the relatively stagnant 401K earnings of Americans and the pension fund of the NYPD (New York Police Dept.). The charts are supposed to make viewers very angry at these “rich capitalists.”

What these charts don’t tell viewers, however, is that, when people list the average salaries of CEOs on Wall Street, they usually are only talking about the companies on the S&P 500. Thus, it’s an unfair Communist, leftist ploy to take only the average pay of such high-level CEOs. A more fair comparison would be to compare these CEO salaries and bonuses with the average, usually white collar, salaries and bonuses at these same firms, not the average American worker in the whole country. Or, better yet, take the salaries and bonuses of all the CEOs at all the businesses across America and compare them to the average worker’s annual salary and bonus. All the statistics during the end credits could lead to an anti-capitalist, “share-the-wealth” scenario that would destroy the economic liberty and meritocracy that have made America great. Someone should tell Will Ferrell and his buddy, Adam McKay, to spare us the political lessons. To paraphrase one pundit, “Shut up and be funny!”

That said, it’s probably true that American businesses, especially many of the larger, most profitable corporations, could share company profits with their lower-level workers much better than they are doing right now. But, there are less contentious, more accurate ways of making that point. You don’t have to rely on phony, misleading leftist statistics coming from a Neo-Marxist viewpoint.