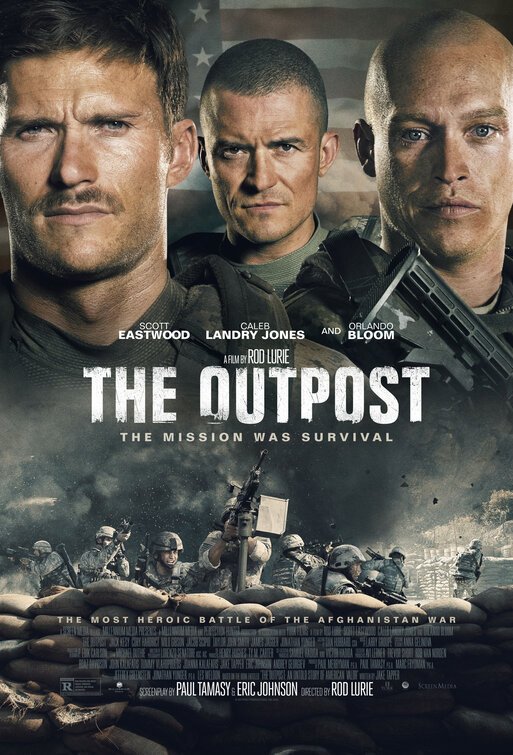 Set in 2009, THE OUTPOST is a brilliant, powerful war movie about one of the two biggest battles during the Afghan War. The movie opens with some new soldiers arriving at a remote Army outpost, stationed at the bottom of a small valley surrounded by mountains near the Northern Afghan village of Kamdesh. Their commander, First Lieutenant Keating, dies while driving a truck across a narrow mountain road, which partially collapses. The outpost is renamed Camp Keating. Just before the Army is scheduled to close the hard-to-defend camp, more than 300 Taliban fighters attack the camp. An intense, thrilling, desperate battle ensues.

THE OUTPOST is a stirring, heart-wrenching, patriotic tale of survival and sacrifice. The movie is superbly directed and acted. In fact, this is one of the most emotionally powerful war movies ever made. It also has a strong moral worldview with positive Christian content. However, THE OUTPOST contains constant foul language and very strong violence, though it avoids the gruesome images of recent war movies like SAVING PRIVATE RYAN and HACKSAW RIDGE. Sadly, THE OUTPOST has nearly 350 obscenities and profanities.

(BBB, PPP, CC, FR, LLL, VVV, S, N, DD, M):
Dominant Worldview and Other Worldview Content/Elements:
Very strong moral, patriotic worldview in a heart-wrenching but inspiring war movie of survival and sacrifice in Afghanistan, with some strong, overt Christian, biblical content and references (including repeated song lyrics mention God in the refrain), plus the American commander of a remote Army outpost tries to appeal to the Muslim faith in Allah of some local Afghani village elders
Foul Language:
At least 326 obscenities (including many “f” words), 22 strong profanities, one light profanity
Violence:
Very strong and strong, frequent combat violence with some blood includes many gun battles, frequent machine gun fire, many explosions, many mortar rounds explode, many American soldiers and especially many enemy fighters get hit by gunfire, one man suffers a bullet to the helmet, but it doesn’t penetrate and he lives, soldiers shot dead, one brief image of a man’s wounded leg with bone sticking out, man carries wounded man to safety under heavy gunfire in lengthy scene, large armored truck tumbles over a cliff, and there’s an image of the bloody driver dying, sudden explosion as two men walk across wooden bridge, and some images of blood as doctor works on wounded soldiers, and when soldiers are shot or killed during battles
Sex:
A soldier is caught with photo of another soldier’s wife, and a crude comment is made about what he was doing, and the soldier mocks the other soldier’s outrage by kissing the photo
Nudity:
Rear male nudity when a soldier taking a shower in a small military camp must grab a weapon and start firing back at the enemy and some brief images of upper male nudity as soldiers relax or jump out of bed
Alcohol Use:
No alcohol use
Smoking and/or Drug Use and Abuse:
Brief smoking and a commanding officer chastises a soldier under him for being caught smoking hashish, and the officer wonders why only this soldier has trouble laying off such recreational drug use, unlike the other soldiers he’s commanding; and,
Miscellaneous Immorality:
Afghan villagers are greedy and unreliable.

Set in 2009, THE OUTPOST is a brilliant, powerful, stirring war movie about one of the two biggest battles during the Afghan War where a small squadron of 53 American soldiers in an impossible-to-defend valley outpost must stop about 400 attacking Taliban soldiers from killing them all. THE OUTPOST is a heart-wrenching, patriotic, ultimately inspiring tale of survival and sacrifice with several overt Christian, biblical references, but it contains constant foul language and very strong violence, though it avoids the gruesome images of recent war movies like SAVING PRIVATE RYAN and HACKSAW RIDGE.

The movie opens with a crawl introducing viewers to the Army outpost, stationed at the bottom of a small valley surrounded by mountains near the Northern Afghan village of Kamdesh. The crawl quotes one general who opined that Afghan outposts like this are “Camp Custer, because everyone is going to die” (a reference to the Battle of the Little Big Horn, where American Indians killed General Custer and all of his men in 1872).

Cut to several new replacement soldiers arriving by helicopter to the camp, including Staff Sergeant Clint Romesha, Specialist Sergeant Ty Carter, Sergeant Justin Gallegos, Sergeant Michael Scusa, and Sergeant Josh Kirk. The new men are introduced to the outpost commander, First Lieutenant Ben Keating, who clearly is concerned for his men and gung ho about the camp’s mission to befriend the people of Kamesh and stop the Taliban from funneling weapons through the valley from Pakistan to other parts of Afghanistan. The new men, however, wonder why the Army are letting the Taliban use the mountains to attack the camp from the high ground. It doesn’t make sense militarily.

After the new soldiers arrive, the movie shows exactly why the camp’s position at the bottom of the valley leaves the Americans vulnerable to attack from the high ground. Some Taliban soldiers are soon shown shooting their rifles and machine guns into the camp from mountain perches. The first attack doesn’t stop until the squadron’s mortar unit lobs a couple well-placed mortars into the Taliban position above the camp.

Some of the new soldiers travel with Lieutenant Keating into the village to speak with village elders. Keating promises the elders money and new projects to improve the village of they cooperate. Keating really believes his men are making a difference.

One night, Keating decides that the camp must drive a large armored supply truck back to a nearby base. He believes the truck gives the Taliban in the mountains above too big of a target for their weapons to shoot. However, Keating decides to drive the truck himself down the narrow road, and the heavy truck collapses part of the road, plummeting down a canyon, and Keating is killed. The Army brass decides to rename the outpost Camp Keating in his honor.

In the days ahead, Camp Keating loses another commander to a Taliban explosive device on a bridge over one of the raging streams that populate the mountainous area. His replacement is a lot more cautious. To the men’s consternation, he doesn’t want them to personally investigate the man suspected of placing the explosive device that killed his predecessor. Staff Sergeant Romesha chastises one of the other soldiers for repeating stories that the other men are calling their new commander a coward.

Then, in late summer of 2009, the new commander tells the men that the Army is going to close the base on October 6, but he will be leaving before then for a new assignment. He orders the men to say nothing of this plan in their letters or phone calls back home.

The men seem to obey his order to the letter, but on the early morning of October 3, a battalion of 300 to 400 Taliban fighters attack Camp Keating. This time, however, the Taliban fighters have their own mortars. In short order, the base’s own mortars are rendered useless, and the American soldiers who are pinned down are running out of ammo as they return fire. Some of them and other soldiers try to get to the ammo building to replenish everyone’s ammo, but the gunfire and occasional mortar rounds are making that very difficult, though not impossible.

Eventually, a few Taliban fighters start to breach the camp. Headquarters is sending in some reinforcements and helicopters, but they still won’t arrive for several hours. The new lieutenant in charge of the camp wants to abandon the outpost, but Sergeant Romesha wants to take some volunteers to drive back the Taliban and secure the front gate. He believes they have a good chance to succeed.

Meanwhile, Sergeant Carter and another soldier are trapped in one of the camp’s two armored Humvees. A third solider, Private Stephen Mace, lies wounded a few feet away behind the cover of some rocks. As Romesha leads the valiant attempt to secure the front gate, Carter makes a desperate attempt to rescue Mace and get him to the camp’s little hospital tent.

Will Romesha and Carter succeed? Will the reinforcements and helicopters arrive in time to save the wounded men and the American soldiers still fighting?

THE OUTPOST is a heroic, heart-wrenching, patriotic, intense, and superbly directed and acted tale of sacrifice and survival. In fact, the squadron at Camp Keating is the most decorated squadron in 50 years.

The cast does an incredible job bringing lots of heart-wrenching emotion to the movie, which is deftly superbly directed by Rod Lurie. Most enjoyable, and delivering two of the best, most moving performances in recent memory, are Scott Eastwood as Staff Sergeant Romesha and Caleb Landry Jones as Sergeant Carter. Viewers will agonize with Jones as he desperately tries to save Mace’s life. Eastwood gives a rousing performance as he leads the men in a last-ditch effort to repel the Taliban forces. Orlando Bloom is also very good as First Lieutenant Keating. The three men bring years of experience to their roles that puts the movie on a high level. Using actors well has always been one of Director Rod Lurie’s strengths.

THE OUTPOST has a strong moral worldview with positive Christian content. For example, a beautiful song co-written by Director Rod Lurie, who went to West Point and served in the Army himself, mentions God repeatedly in the lyrics. Ultimately, the movie not only is a tale of sacrifice and survival; it’s also a story of brotherhood and love. Almost every soldier who died in the Battle of Kamdesh did so trying to save the life of another soldier.

Sadly, though, THE OUTPOST contains constant foul language (nearly 350 obscenities and profanities) and very strong violence, though it avoids the gruesome images of recent war movies like SAVING PRIVATE RYAN and HACKSAW RIDGE. So, MOVIEGUIDE® advises more than extreme caution. Stay to watch the very end of the credits, however. They include brief interviews with the real surviving soldiers of the Battle of Kamdesh. These men are unforgettable.