"Celebrating the Founding of Self-Government and American Liberty" 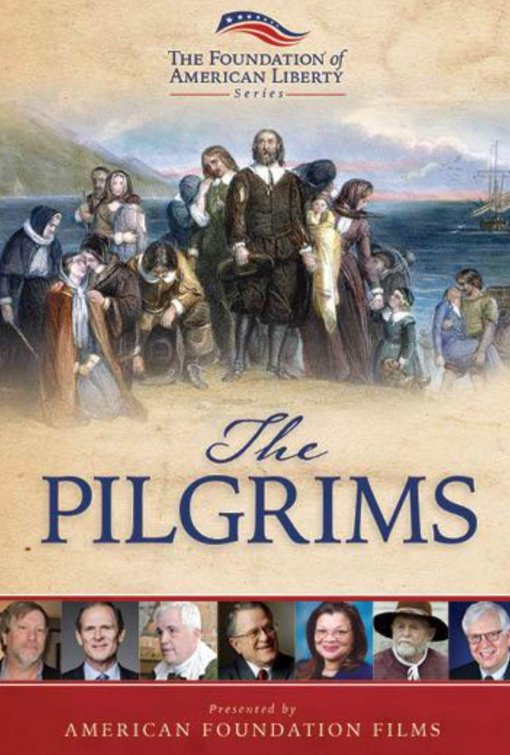 THE PILGRIMS is an awesome documentary that tells the Christian history of the Pilgrims who landed in Cape Cod on November 9, 1620. Interviewing major scholars and historians, the movie tells the beginnings of the local church in England from which the pilgrim settlers came. It describes how they moved to Holland to get away from religious persecution in England. They then decided to send a small contingent of young settlers to North America, who founded Plymouth, Massachusetts and established the first democratic civil government and system of free enterprise in America.

THE PILGRIMS is a terrific documentary. It’s inspiring, incredibly informative and concise. THE PILGRIMS has a very strong Christian, biblical worldview. It uses primary sources that give all glory to God for the survival of the Pilgrims during that first winter. THE PILGRIMS has a very strong Pro-American, pro-capitalist viewpoint. As such, it shows how important the Pilgrims and their Mayflower Compact was to American liberty, including the Declaration of Independence and the United States Constitution. MOVIEGUIDE® advises caution for younger children because of some references to violence in THE PILGRIMS.

(CCC, BBB, PPP, CapCapCap, ACACAC, V, N, A, M):
Dominant Worldview and Other Worldview Content/Elements:
Very strong Christian, biblical, moral worldview in documentary about the Pilgrims, with very strong Pro-American, pro-capitalist content that promotes treating all people equal under the law, trade, land ownership, religious liberty, civil liberty, and self-government that also has a very strong anti-communist and anti-socialist viewpoint
Foul Language:
No foul language
Violence:
Some references to and drawings of hanging, a person being burned at the stake and disembowelment
Sex:
No sex
Nudity:
Some engravements of Native American nudity
Alcohol Use:
A mention of ale, but no drinking depicted
Smoking and/or Drug Use and Abuse:
No smoking content or drugs; and,
Miscellaneous Immorality:
Nothing else objectionable.

THE PILGRIMS is an awesome documentary that tells the Christian history of The Pilgrims who landed in Cape Cod on November 9, 1620 and, with the Mayflower Compact and other subsequent actions, established the first Christian, capitalist republic in America that became the foundation for the Declaration of Independence and the United States of America. THE PILGRIMS gives an inspiring, incredibly informative and concise history lesson on all the religious, political and economic benefits that this tiny group of people gave not only to America but also the entire world.

In 1605, an attempted Catholic plot against the King of England and Parliament led to the King establishing strict control over all churches through the Church of England. Some people, however had an issue with the way the King and the Church of England ran things. One group, called the Puritans, wanted to “purify” the Church, but another group, called separatists, wanted to completely separate from the Church of England. About 400 to 500 people from one group of separatists eventually moved to Holland. However, 10 years later, they became dissatisfied with their progress there, partly because their children were becoming more and more Dutch and more libertine. So, they decided to travel to the New World and settle somewhere in the northern parts of Virginia (at that time near New York).

However, before moving en masse to America, they decided to send a small contingent of younger people there first. Eventually, a group of 102 people, including both separatist settlers and regular settlers, reached Cape Cod in Massachusetts, about 250 miles north of New York. Before they set foot on the land, however, 41 men signed the Mayflower Compact, a legal covenant with God and with one another establishing their own civil government of equal justice under the law and providing for religious liberty, based on biblical principles under God. The covenant established by the separatist settlers and the regular settlers through the Mayflower Compact included equal treatment under the law, land ownership, trade, religious liberty, civil liberty, and self-government.

Many people died during that winter, however, with only 51 colonists surviving. They survived, however, because they had discovered a cache of corn left by a nearby Native American tribe, which was wiped out by a plague three years earlier.

The settlers soon established friendly relations with one of the survivors of that tribe, a man named Squanto, who was overseas when the plague hit. He helped the settlers learn how to fish and plant food. Squanto also helped them establish peaceful relations with the local chief of all the tribes in the nearby area, including parts of Rhode Island. The Pilgrims treated the Native Americans equally and even executed two Englishmen who murdered one of them and one of their own who also murdered a Native American.

THE PILGRIMS is a terrific documentary. It’s inspiring, incredibly informative and concise. Being released just in time for Thanksgiving on the NRB Channel and other outlets, it provides a great history lesson for older children and adults.

THE PILGRIMS has a very strong Christian, biblical worldview. It uses primary sources that give all glory to God for the survival of the Pilgrims during that first winter. THE PILGRIMS also has a very strong Pro-American, pro-capitalist viewpoint. As such, it shows how important the Pilgrims and their Mayflower Compact was to American history, including the Declaration of Independence and the United States Constitution. Leftists falsely cite a small instance of slavery in 1619 as the founding of America, but, in reality, it was the Mayflower Compact’s establishment of a civil government in 1620, including a system of equal justice, civil liberty, religious liberty, free enterprise, land ownership, trade, and self-government that founded America. MOVIEGUIDE® advises caution for younger children because of some references to violence in THE PILGRIMS.