"The Perils of Compromise" 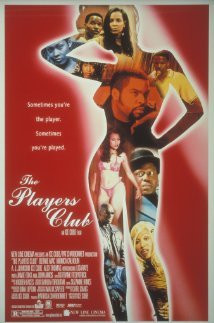 Ice Cube wrote and directed THE PLAYERS CLUB. Diana Armstrong dreams of becoming a broadcast journalist. She works by night at a strip club called The Players Club and attends school during the day. The Players Club is run by a two-bit hustler named Dollar Bill who owes money to a hoodlum. Diana becomes a popular attraction, even giving out degrading table dances. Other dancers including Ronnie and Tricks despise Diana for keeping her spirit and making more money. As Diamond tries to stop her cousin from becoming a prostitute, Dollar Bill is chased by loan sharks resulting in violence and tragedy.

The seeds of THE PLAYER'S CLUB were planted in 1991 when Ice Cube visited the strip clubs of Atlanta. Containing ugly and gritty violence and sexual situations, it is a movie with little redeeming value. Diamond tries to keep her chin up, but she knows that what she is doing is cheapening and rancid. The movie seems to advocate that this is a lifestyle you can choose to do if you think you have the strength to overcome the obstacles. Like BOOGIE NIGHTS, it covers territory that goes behind the shimmering curtain and shows the depravity of sexuality run amuck.

A few years ago, Spike Lee made a movie about the perils of the sex industry with GIRL SIX. It basically demonstrated the dehumanization and depravity of degrading yourself to be a phone sex operator. Now, one-time rapper and current actor Ice Cube steps into the writer’s and the director’s chairs with THE PLAYERS CLUB to cover the damaging world of strip clubs. Presenting gritty reality, it doesn’t glorify the industry, but gives a warning call that this life will be difficult and even dangerous.

Diana Armstrong (Lisaraye) dreams of becoming a broadcast journalist. She will not attend the college that her father chooses, and so she works by night at a strip club called The Players Club and attends school during the day. The Players Club is run by a two-bit hustler named Dollar Bill (Bernie Mac) who owes big money to a competing hoodlum. Under the stage name Diamond, Diana becomes a popular attraction, even giving out table dances which she herself calls degrading. Other dancers including Ronnie and Tricks despise Diamond for keeping her spirit and making more money. The only person Diamond trusts is the deejay named Blue (Jamie Foxx).

Diamond’s young and naive cousin Ebony (Monica Calhoun) comes to work at the club, and Diamond looks after her. However, Ronnie and Tricks lure Ebony into part-time work as a prostitute. Furthermore, Ronnie has been seducing Diamond, trying to have a sexual tryst with her. Events begin to quickly go downhill when bullets fly at the club during a visit by rap group 2 LIVE CREW. Furthermore, Ebony gets raped at a bachelor party, and a loan shark comes to pay a visit to Dollar Bill. All of this adds up to a violent ending, giving fare warning to the dangers of such a lifestyle.

Sorrowfully, the seeds of THE PLAYERS CLUB were planted in 1991 when Ice Cube visited the strip clubs of Atlanta. Realizing the club scene had unique dangers and troubles, he wrote THE PLAYERS CLUB in six weeks and looked for financing. Containing very ugly and gritty violence and sexual situations, it is a movie with little redeeming value. Diamond tries to keep her chin up during the degrading by saying to her cousin, “Make the money, don’t let it make you,” but both know that what they are doing is cheapening and rancid. Hence, it seems to advocate that this is a lifestyle you can choose to do if you think you have the strength to overcome the obstacles and hazards. When Diamond becomes frustrated with her boyfriend, she pulls out a gun and starts shooting. Her first bullet hits a Bible, perhaps indicating that this lifestyle has killed all of the values that that Holy Books.

THE PLAYERS CLUB is not a feel good movie. It is sometimes difficult to watch. Like BOOGIE NIGHTS and SHOWGIRLS, it covers territory that goes behind the shimmering curtain of the lighted stage and shows the depravity of sexuality run amuck. It is a story of lonely men, desperate women, criminal bosses, drugs, lesbianism, prostitution, and more. This is not an original movie, but it does demonstrate the sin of stripping among the African-American community. Therefore, it is a movie which, only by default, may convince a young African-American to stay in legitimate business. Primarily, however, it will merely serve a plateful of ugliness which will titillate too many who see it.