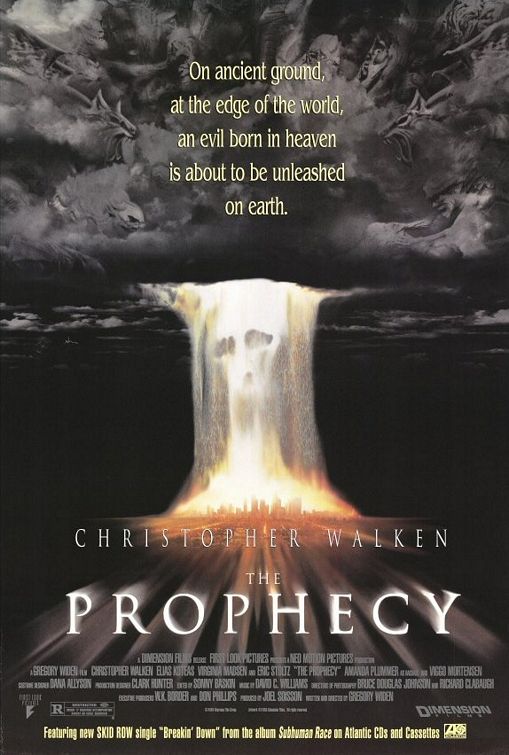 THE PROPHECY contains some accurate description of Lucifer and his fall from Heaven, but it also contains false, far-fetched ideas of a second angelic fall from grace. When the angel Gabriel comes to earth to find the soul of a deceased war criminal to help him overthrow heaven, a priest-turned-cop tries to stop him. This movie plays "what-if" with Bible stories and ends up being campy, misleading and blasphemous.

In THE PROPHECY, Thomas Daggett is a priest just about to receive his ordination. At the alter, he is visited with horrific visions and he abandons his faith and becomes a detective. When an angel is murdered, Daggett finds a missing chapter of the Bible which states that there was a second fall of angels in heaven after Lucifer and his cohorts fell. This time, the revolt was led by Gabriel out of spite and jealousy that God gave humanity a spirit and a soul. Gabriel is now seeking to gain control of heaven, by visiting earth and employing the soul of a ruthless war hero. The chilling climax involves a battle between Gabriel, Daggett and of all beings, Lucifer.

For such an interesting premise, THE PROPHECY isn’t well-executed. The story would have been much more interesting as a war film between Heaven and the fallen angel factions. While this movie is remarkable in its frank discussion of biblical doctrine and matters of faith, it is ultimately inaccurate. The Bible says not to add nor subtract anything from its pages, so the whole 23rd chapter of Revelation story is blasphemous. Anyone looking for truth should not look to this movie, but to the Bible. Also, this film suggests that American Indian practices can exorcise spirits from humans. It is Jesus Christ, and not Mother Earth, who is ruler over all.