"A Superior But Excessive Sequel" 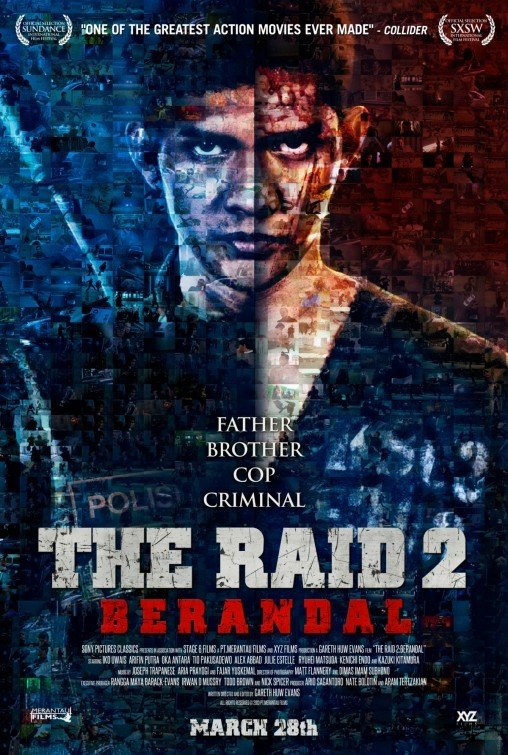 THE RAID 2 is an incredible, but violent, action movie from Indonesia, directed by a filmmaker from Wales. Rama, the rookie policeman from the first movie, has just fought his way out of a building filled with gangsters. Rama wants to resume a normal life with his wife and infant son. However, his triumph has attracted the attention of a more professional group of gangsters, protected by corrupt police officers. To protect his family and get justice for his brother’s murder, Rama goes undercover to enter the criminal underworld himself. Will Rama have to compromise his values? Will he survive the experience and return to his family?

THE RAID 2 is filled with amazing martial arts stuntwork and two exciting car chases. One chase sets a new standard for all future car chases. The movie also seriously deals with the moral dilemmas that come when a policeman has to go undercover and gain the confidence of criminals. However, THE RAID 2 contains a gratuitous, excessive number of “f” bombs, too much extreme violence, and a very lewd moment in one scene.

(B, Ho, LLL, VVV, SS, NNN, AA, DD, MM) Light moral worldview where undercover policeman has to bring gangsters and crooked cops helping them to justice, but some moral ambiguity because of the nature of being undercover and having to gain the confidence of evil, greedy men, some of whom are worse than others, plus a crude homosexual reference in one scene; at least 93 obscenities (mostly “f” words) and no profanities; extreme violence, some of it rather bloody or brutal, includes one short car chase, one long car chase, lots of martial arts fighting with some bloody and not-so-bloody stabbings with sharp tools (especially a climactic battle between the hero and a criminal gang’s main enforcer as well as some fighting with a female assassin wielding a hammer and her male partner wielding a baseball bat), shootouts, point blank shootouts, female assassin does quite a bit of damage to her victims with a hammer, male assassin with baseball bat clubs people to death, and one criminal allows another criminal to slit the throats of several “traitors” but the throat slitting occurs off screen; brief strong sexual scene in one shootout that occurs in a furnished warehouse-type room where a porn video is being made behind a sheet which shows some suggestive silhouettes and married hero has to sit in a private room at a club with his young gang employer where they are accompanied by two women, but hero doesn’t do anything with his girl in that scene; long-shot of an explicit male sex toy strapped on a scantily clad woman’s waist who comes out from a sheet behind which she’s engaged in making a porn video; alcohol use and drunkenness; smoking and brief drug references; and, undercover policeman is almost morally compromised in his mission of trying to bring down a gang and its supporters in the police department, undercover policeman’s boss deliberately kills a corrupt police office in front of the undercover policeman, gangsterism shown but rebuked in the context of the story.

THE RAID 2 is an incredible, but violent, action movie from Indonesia, directed by a Welsh filmmaker, about an undercover policeman trying to break up a criminal gang and expose the corrupt cops they’ve bribed. Though the action goes on a bit long at times and sometimes even stretches credulity, it has some of the best martial arts choreography you’ll ever see. It also has one of the most exciting, brilliant car chases ever put on film. Regrettably, there’s an excessive, gratuitous amount of strong foul language and bloody violence, though the bloody parts aren’t constant. There’s also some brief lewd content.

This sequel to THE RAID: REDEMPTION, which was definitely not as good, begins where the last movie left off. Rama, the rookie policeman from the first movie, has just fought his way out of a building filled with gangsters. He thinks he can now resume a normal life with his wife and infant son.

However, his triumph has attracted the attention of a bigger, more professional group of gangsters. To protect his family and get justice for his brother’s murder, Rama must go undercover to enter the criminal underworld himself and expose the corrupt police officials helping the gang.

So, the head of an elite, secret group of policemen fighting the gangs orders Rama to go undercover in prison. In prison, Rama will pose as a young violent offender named Yuda. His mission? To gain the confidence of Uco, the young rebellious son of a prominent gang kingpin. Rama impresses Uco by his fighting skills and further impresses him when he saves Uco’s life during a prison brawl in the muddy, rain-soaked prison yard.

Rama doesn’t get out of prison and begin his undercover work as part of Uco’s gang until two years later. How far will Rama have to go to complete his mission and return to his family?

THE RAID 2 is filled with amazing martial arts stuntwork and two exciting car chases, including the lengthy second one, which sets a new standard for all future car chases. The movie also seriously deals with the moral dilemmas that come when a policeman has to go undercover and gain the confidence of criminals. Director Gareth Evans clearly outdoes himself with this sequel.

Although THE RAID 2 is a four-star movie, some of the fight scenes go on a little too long. A climactic fight scene between Rama and the gang kingpin’s major enforcer seems to be the longest. As such, though most of the action there is truly amazing, it becomes a little bit unbelievable. Iko Uwais is excellent as the undercover policeman, as is the supporting cast. Iko’s martial arts skills are top of the line.