"Love and Knowledge Triumph over Ideology" 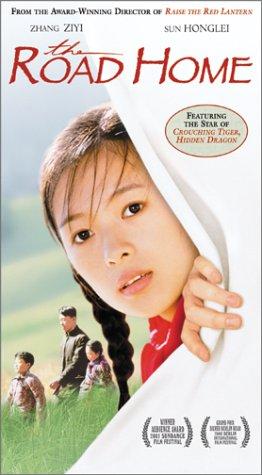 Zhang Ziyi of CROUCHING TIGER, HIDDEN DRAGON stars in THE ROAD HOME as an 18-year-old woman in rural China in the 1950s who falls in love with a teacher from the big city. The love between them endures political oppression. Decades later, their son celebrates his parents’ love and the values they shared when the father suddenly dies after trying to raise money for a new schoolhouse in the village.

THE ROAD HOME is directed by Zhang Yimou, who made another enchanting movie last year about rural teachers, NOT ONE LESS. THE ROAD HOME focuses on character and atmosphere. Taking center stage is Zhang Ziyi’s beautiful smiling face, often accompanied by a lyrical refrain of Chinese music. This refrain reappears during the funeral scene of the father and at the movie’s wonderful climax, which plays like IT’S A WONDERFUL LIFE. THE ROAD HOME is not just a poetic celebration of the love between two people; it’s also a celebration of transcendental values such as love, knowledge, community, service, and hard work. The only things missing are a truly biblical worldview and a focus on the love, joy and knowledge which Jesus Christ brings.

(Ro, BB, Pa, D, M) Romantic worldview with solid moral elements & brief references to superstition & veneration of ancestors, but no real idolatry or worship of false gods/ancestors; no foul language; no violence; no alcohol use; smoking; and, Communist officials order teacher back to city for questioning concerning obscure political “mistakes.”

Zhang Ziyi of CROUCHING TIGER, HIDDEN DRAGON stars in THE ROAD HOME as an 18-year-old woman in rural China in the 1950s. The movie opens, however, about 45 years later when her son, Luo Yusheng, returns to her rural village when his father, her husband, dies in the middle of winter.

When he arrives, the mayor tells Yusheng that his father died in a hospital in another village while trying to raise money for a new school building. The father had been the village’s only teacher ever since the old school building was built when he first arrived. The mayor also tells Yusheng that his mother, Zhao Di, wants to follow age-old local customs for the funeral. Thus, she will personally weave the funeral cloth on her loom, the only one left in the village, and the local men must carry the coffin from the hospital back to the village on the only road.

The mayor wants Yusheng to dissuade Di from her desires. He fears that even if he could find men willing to carry the coffin many miles through the winter snows, there would not be enough of them. Also, since most of the young men have left the village to work in faraway cities, including Yusheng, the village now consists mostly of old men.

While Yusheng ponders this problem, he recalls the story of how his mother and father met and fell in love. It is a story that everybody in the village knows by heart. As Yusheng reflects, the movie flashes back to the past and shows what happened. Di was 18-years-old when 20-year-old Changyu came to be the village schoolteacher. Everyone considers her the prettiest girl in town, and she immediately sets her sights on the handsome newcomer.

Di is very shy, however, so she follows him when he walks his students back and forth along the village road. She even starts drawing water from the little-used old well next to the schoolhouse so she can hear Changyu reciting from the little book which he himself wrote to teach his students about moral values, the passing of the seasons and the importance of knowledge.

Their developing romance is curtailed when the teacher is ordered back to the city for obscure political “mistakes.” After months of being away, Changyu is rumored to be due back. When he doesn’t show, Di decides to set off through the snow and cold to look for him in the city. She nearly dies, however, and Changyu leaves without permission to be by her bedside. Di recovers, but the two lovers are kept away from one another for two years as punishment. When he finally returns along “the road home,” Di is there to greet him, and they are never separated again.

Back in the present, their son, Yusheng, realizes that his mother’s wishes must be granted, no matter what it takes. Di, however, has one more request for her son, a request that leads to the movie’s final epiphany.

THE ROAD HOME is directed by Zhang Yimou. Famous for earlier movies like JU DOU (1990) and RAISE THE RED LANTERN (1991), Zhang in the last year has turned toward simpler, more wholesome movies like THE ROAD HOME and last year’s NOT ONE LESS, another movie about teachers in rural China. Zhang says he’s been making such movies as a reaction against “really vulgar commercial films” and the materialism he sees in modern China.

Thus, Zhang focuses on the characters in his story. Taking center stage, however, is Zhang Ziyi’s beautiful smiling face, often accompanied by a beautiful, lyrical refrain of Chinese music. This refrain appears whenever she follows her eventual husband along “the road home” and whenever she stands near the schoolhouse, hearing him teach the students. It reappears during the funeral scene of her husband and at the movie’s wonderful climax, which plays like a foreign version of IT’S A WONDERFUL LIFE.

THE ROAD HOME, therefore, is not just a celebration of the love between Di and Changyu. It’s also a celebration of simple rural values and a celebration of the learning process. In that sense, viewers will come away with a strong feeling of respect and veneration for transcendental values. Although the director, Zhang, appears to take a romantic worldview toward the inherent goodness of the human race, he combines this romantic worldview with strong moral elements. Several times in the movie, Changyu’s students (past and present) recite from the personal, non-ideological journal of Changyu, “In everything there is a purpose. Spring is the season to sow. Know the present. Know the past. Show respect for your elders.” At another point, Di tells her son, “Work hard and make a good life.” Thus, transcendental values, such as love, knowledge, hard work, and community, endure. They triumph over ideology.

The only things missing from THE ROAD HOME are a truly biblical worldview and a Christological focus on the love, joy and knowledge which Jesus Christ brings. The movie, however, is a step in the right direction for Chinese cinema. As such, it may have something to teach Christian filmmakers who want to reach past the anti-Christian bigotry of today’s society and show people the transcendental values which God wants mankind to follow.