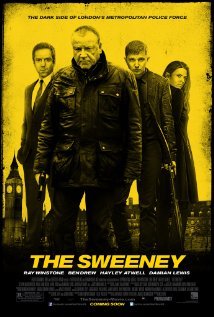 THE SWEENEY is a British cop thriller based on a popular, gritty cop show from the 1970s. The Flying Squad is a special police squad in London. Cockney rhyming slang links Flying Squad with Sweeney Todd, the infamous barber of Fleet Street, so the squad is called “The Sweeney.” The squad starts investigating a small jewelry heist when a woman customer is shot dead for no reason. She turns out to be a witness against a notorious bank robber in Europe, who’s now in London. The squad’s hard-nosed leader, Jack Regan, gets into trouble when the female squad member, his girlfriend, gets killed in a shootout. He also wrongly arrests another man who may be involved in the bank heists.

THE SWEENEY has exciting action, some interesting plot developments, and the bad guys eventually lose. However, there are plot holes, silly moments, and a constant, annoying slew of “f” words. The soundtrack is too loud and busy. Also, the hardnosed veteran’s girlfriend is another man’s wife. A couple lewd moments and the lewd language make THE SWEENEY unacceptable viewing.

(PaPa, RoRo, B, LLL, VV, SS, NN, AA, D, MM) Strong mixed or pagan worldview with some strong Romantic elements of flaunting sexual mores and biblical standards against obscene talk, with, however, a moral premise of justice overcoming revenge and murder; at least 142 obscenities (most of them “f” words), one Jesus and two light profanities; strong violence with some blood includes gun battles, car chases, fighting, a few people shot point blank, video of woman shot in head, and fighting; depicted adulterous fornication in one scene, implied in another; rear male nudity in one sex scene; alcohol use and drunkenness in one scene; smoking; and, stealing, corruption, and revenge but rebuked.

THE SWEENEY is a British movie based on a popular, gritty cop show from the 1970s. It has a lot of exciting action, some interesting plot developments, and the bad guys eventually lose. However, there are some plot holes, some silly moments, and a constant, annoying slew of “f” words. Also, the hardnosed veteran leading the police squad is sleeping with another, younger man’s wife.

The movie opens with a special London police squad, called the Flying Squad or “The Sweeney” because Squad rhymes with “Sweeney Todd,” stopping a heist of gold ingots. After the heist, the squad’s leader, a middle-aged man named Jack Regan, appears to sell a few of the ingots to a man in a parked car.

Off duty, the movie reveals that Regan is (unbelievably) sleeping with one of the younger female cops, Nancy, who could be his daughter. Nancy just happens to be the wife of an Internal Affairs detective, though their marriage is on the rocks. At one point, Regan suggests they tell her husband about their relationship so they can cohabitat. Suspecting the affair, Nancy’s husband, Ivan, is itching to find some way to take away Regan’s badge. Ivan doesn’t like Regan’s old school way of cutting corners and working on the edges of the law. However, Regan and his team get results.

The squad starts investigating a small jewelry heist where one of the masked gunman shoots a woman in the store in the head for no apparent reason. They discover that the woman was an eyewitness to a notorious European gangster’s exploits on the continent. They suspect the gangster is behind the heist and planning a bigger heist.

They get the call about the second heist taking place in the spot they predicted, which happens to be near Trafalgar Square. A huge shootout and chase takes place, and the lead gangster, a man named Trebolt, brutally murders Nancy during the chase. Regan was trapped between two cars and couldn’t save her.

Regan is now really angry. He suspects that the explosive charges used in the two heists must be the work of an old nemesis, who recently got out of jail. He leads his team in a roundup of the man, along with some other cronies. The bust and the interrogation go wrong, however, and Nancy’s husband finally gets grounds to take away Regan’s badge. To make matters worse, he deliberately sticks Regan in a local prison, where his own life is now in very real danger. Regan will have to use his street smarts to survive, while his younger partner, Carter, hunts down some evidence to get Regan out of jail.

THE SWEENEY shows that Regan sometimes violates the law and engages in a little graft. However, after the witness is brutally murdered, Regan clearly cares about putting the gang that did it away. The movie also builds up sympathy for him when his secret girlfriend is murdered and when the IA detective deliberately puts Regan into a situation where he could be murdered. These plot twists keep the movie interesting, as do the exciting action sequences.

That said, the idea that the beautiful female detective would be interested in such an older, and even overweight, detective like Regan stretches credulity. It’s also rather silly, even though veteran actor Ray Winstone shows a lot of charisma while playing Regan. Also, the shootout in Trafalgar Square is a bit over the top. None of the detectives’ gunshots hit their targets! This wouldn’t have been so ridiculous if the shootout didn’t go on so long. Hence, this scene also stretches the movie’s credibility. Finally, the soundtrack is too loud and busy.

The move’s exciting, tense third act makes up for some of these problems. Also, it was good to see that, in the end, Regan makes a moral decision in favor of justice over revenge.

The biggest problem with THE SWEENEY, though, is its lewd content. For example, the movie contains a never-ending, excessive stream of “f” words. There are also a couple adulterous sex scenes between the male and female lead. This content dilutes the movie’s moral elements. It also makes THE SWEENEY unacceptable viewing for moviegoers, according to MOVIEGUIDE®’s high moral, biblical standards.