"Dim of Wit but Pure of Heart" 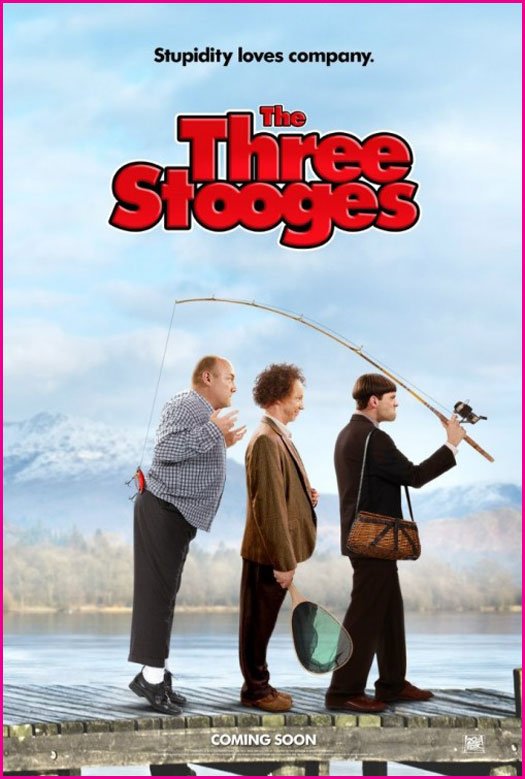 THE THREE STOOGES are back in living color, in a hilarious modern comedy featuring three actors made up to look and talk just like the originals. The story shows Moe, Larry, and Curly growing up in an orphanage run by Catholic nuns. Years later, they become the orphanage’s bumbling maintenance men. The nuns find out that the orphanage will have to close its doors in 30 days because of financial problems. Moe, Larry, and Curly set out for the big city, determined to raise the $830,000 needed to keep the orphanage in business. In the big city, they are duped by a scheming married woman and her greedy boyfriend to bump off the lady’s husband.

THE THREE STOOGES is hilarious. The cast is perfect. The three actors playing the Stooges bring forth the icons in all their slapstick glory. The movie contains a surprising amount of heartwarming emotional scenes amid all the comical chaos. In fact, the movie’s premise is morally uplifting and contains some positive, overt Christian references. Even so, MOVIEGUIDE® advises caution for younger children. Happily, THE THREE STOOGES comes with a short epilogue explaining that the physical comedy was faked.

(BBB, CC, Pa, VV, N, M) Very strong moral worldview with strong, overt Christian references stressing helping others, trying to do the right thing though often failing, a pro-adoption message, nun crosses herself and sings part of a “This Little Light of Mine,” nun briefly shown praying at sick child’s bedside, nuns wear crucifixes, Stooges try to save orphanage from closing, Stooges finally realize they need one another despite all their roughhousing, several touching and uplifting moments, plus some pagan and borderline immoral behavior but often rebuked; no foul language, but there’s a scene with babies urinating and the Three Stooges pointing urinating babies at one another and a joke about passing gas that solves a major plot problem; almost non-stop strong slapstick comedy violence with the Stooges hitting and slapping one another, Moe slaps and hits stars of JERSEY SHORE reality show, Stooges accidentally knock out or hit a nun who’s always angry and shouting at them with objects like the iron end of a sledge hammer that comes flying off accidentally, male villain accidentally steps into a bus and goes flying and then is run over by a street cleaning vehicle, Stooges put dynamite into man’s body cast, Stooges on bicycle are dragged by a truck, peanut hits chained lion in groin and lion escapes chain to jump on male villain who later shows up with large scratches on one cheek, villain points gun at people and takes them hostage, Stooges think Catholic Monsignor is attacking nuns and they rough him up after which the Monsignor slaps them for being so stupid, lobster bites Curly on nose and Moe then sticks it into Larry’s pants and Larry then eventually utters a shrill high C note, Larry tries to hit octopus on man’s face with little fireplace shovel but octopus falls off and Larry accidentally hits man on forehead with shovel, cop accidentally gets knocked out and Moe tries to defribulate cop with two hot irons that leave red marks on cop’s chest, etc.; no sex scenes but woman is cheating on her husband and tries to trick Stooges into killing her husband in a made-up mercy killing; brief upper male nudity and shots of female cleavage of female villain, JERSEY SHORE women, and shot of nun who’s wearing a bikini while she serves as a lifeguard at a pool for the children at the orphanage where she serves; no alcohol use; no smoking; and, Moe as a child acts like a tough guy and lies to Larry and Curly about the real reasons why a married couple brought him back to their orphanage, one surly nun is always screaming at Stooges but other nuns are kind, and nun says the Savior made one woman “barren” so she and her husband are now adopting.

The Three Stooges are back in living color in a hilarious modern comedy featuring three actors made up to look and talk just like the originals. It’s got the usual Three Stooges slapstick comedy, but with some surprisingly touching, heartfelt moments.

The movie opens with three babies dropped off at an orphanage run by nuns. The three “angels from heaven” turn out to be anything but. Even as babies, they sport the oddball haircuts audiences have grown to know and love. Moe has a bowl-shaped haircut. Larry has two shocks of bushy red hair spouting from a bald pate. And, Curly has a very short buzz cut.

The boys drive Sister Mary-Mengele to distraction, but the Mother Superior is always tender and forbearing. Then, the nuns get word that the orphanage will have to close its doors in 30 days because of financial problems. Serving as the orphanage’s incompetent maintenance men, Moe, Larry, and Curly are determined to come to the rescue. They set out for the big city, determined to raise the $830,000 needed to keep the orphanage in business.

In the big city, they are duped by a scheming married lady and her boyfriend to bump off the lady’s husband. She offers to pay them the $830,000. The Stooges uncover her evil plot. They learn her real husband is their boyhood friend Teddy, who’s clueless about his wife’s evil plot.

As the Stooges try to save the day, they engage in plenty of their trademark antics, at a hospital, a golf course, and a swanky private party. Meanwhile, Moe finds stardom on Reality TV’s JERSEY SHORE, which features stooges of another kind.

THE THREE STOOGES is hilarious. The cast is perfect. Sean Hayes, Will Sasso, and Chris Diamantopoulos as Larry, Curly, and Moe bring forth the Stooges in all their glory. The movie contains a surprising amount of heartwarming emotional scenes amid all the comical chaos. In a couple scenes, the Stooges realize they need and rely on one another. In one subplot, Mother Superior is praying beside the bed of a sick orphan girl the Stooges have befriended. Thus, despite the edgy slapstick comedy and characters like the screaming, angry nun, the movie’s premise is morally uplifting and contains some positive, overt Christian references. Happily, the filmmakers have included an epilogue where two actors come out and show the children watching that all the hammers and hitting tools are rubber and that the Stooges don’t actually poke anyone in the eye but hit them on their foreheads.

Rent or Buy THE THREE STOOGES: