THE TRUMPET OF THE SWAN

"Swan Out of Water" 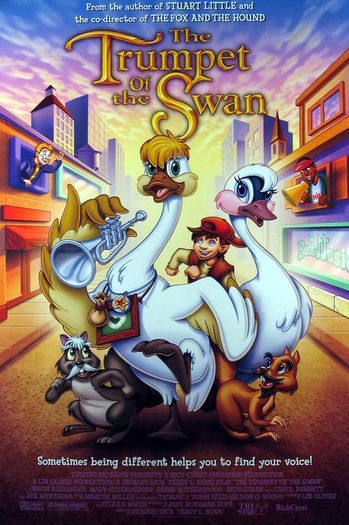 In the movie TRUMPET OF THE SWAN, father swan, played by Jason Alexander is overjoyed when his wife lays three eggs. The father, who is a bit bombastic due to his position as the chief trumpeter swan, immediately breaks into song. Two eggs hatch into girl swans, and finally, his pride and joy, Louie hatches. The parents soon find out that Louie is mute, a serious problem for a trumpeter. Louie goes to great lengths to find his voice. In the process, he learns how to read and write, becomes a pop sensation in Boston playing the trumpet and tries to win the heart of Serena.

THE TRUMPET OF THE SWAN is one of the cleanest children’s movies in a long time. Bad attitudes and actions are clearly rebuked. Violence is held to the minimum. The problem with the movie is its entertainment value. Like some of director Richard Rich’s previous works, the movie looks more like a Saturday morning cartoon. However, this is a movie that MOVIEGUIDE® would like to wholeheartedly support. It’s too bad that the commitment to family values didn’t extend to a commitment to entertainment value

(BB, C, V, M) Moral worldview with two Christian references; no foul language; two swans fight, boy almost goes over waterfall, swan gets scratched when shot by man, squirrels fight with unscrupulous manager; some romance between swans but nothing immoral; no nudity; no alcohol; no smoking; and, father swan steals but is repentant when he finds out the consequences & makes restitution.

Terrific movies have been made from E.B. White’s books, CHARLOTTE’S WEB and STUART LITTLE. White combined reality and fantasy into moral children’s stories with redemptive elements. The impossible seemed plausible in White’s stories. In person, one understood why this was possible. He was a humble, easygoing person who underestimated his perceptive abilities.

TRUMPET OF THE SWAN is one of his better books. Regrettably, the movie does not capture the essence of the book because it tries to remain too faithful. This is the type of movie that family reviewers will want to like. It is carefully crafted to avoid anything objectionable. It is transparently good-hearted and moral. It tries desperately to stay true to the historical context of the book. In doing so, it avoids the heart of the story.

Jason Alexander plays a father swan who is overjoyed when his wife, voiced by Mary Steenbergen, lays three eggs. Father is a little bit bombastic, representing his position as the chief trumpeter swan. Immediately upon the laying of the eggs, he breaks into song. Two eggs hatch into cute little girl swans. Finally, his pride and joy, little Louie, hatches. Regrettably, they soon find out that Louie is mute, a very serious problem for a trumpeter swan. The other swans, of course, make fun of him.

Louie goes to great lengths to find his voice. He teams up with a little boy named Sam Beaver and joins Sam’s first-grade class so he can learn how to read and write. When Sam’s teacher, Mrs. Hammerbotham, voiced by Carol Burnett, objects, Sam reminds her that she’s always taught the class that all races, genders and species are equal. This ridiculous teaching leads her to accept the swan in the class, and Louie is graduated with honors. However, when he goes back with the other swans and starts writing them notes on a chalkboard, they think he’s crazy: after all, they can’t read or write.

Meanwhile, Father tries to find a voice for his son. He flies into Billings, Montana and returns with a trumpet which Louie could play. Regrettably, as he leaves Billings and the store owner is yelling at him, he realizes he’s lost his honor because he stole the trumpet.

Louie decides to learn the trumpet so he can make money to repay the music store. He heads off to Boston, where he becomes a pop sensation. However, he leaves behind Serena, whom he loves, but he cannot tell Serena he loves her because he is mute.

Serena’s father wants her to marry an egotistical young swan with the best trumpet on the lake. In the midst of Louie’s fame and fortune, he hears Serena is going to get married from a bunch of squirrels who communicate over the “Internut.” Louie rushes home from his room at the Boston Ritz Carlton to win Serena’s heart.

THE TRUMPET OF THE SWAN is one of the cleanest children’s movies in a long time. Bad attitudes and actions are clearly rebuked. Violence is held to the bare minimum. The father at one point gets wounded, but it’s very clear that it’s just a scratch.

The problems with TRUMPET OF THE SWAN all involve its entertainment value. Like some of director Richard Rich’s previous works, especially THE SWAN PRINCESS, the movie looks more like a Saturday morning cartoon. It is aimed at little children, which is good, but doesn’t have the depth to reach the older audiences. It has a 1940s and 1950s feel, that is dated, especially in terms of the music. To be perfectly fair, this is the time period that the story takes place, but the filmmakers needed to make this music relevant to today’s audiences.

THE TRUMPET OF THE SWAN is a movie that MOVIEGUIDE® would like to wholeheartedly support. It’s too bad that the commitment to family values didn’t extend to a commitment to entertainment value.

Watch THE TRUMPET OF THE SWAN: