"Should Christians Compromise with the World?" 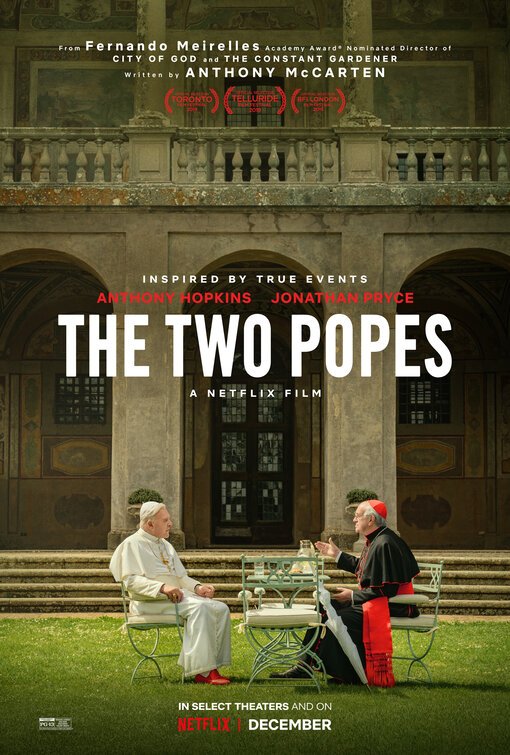 THE TWO POPES is a drama about the transition in the Roman Catholic Church from the conservative Pope Benedict XVI to the more liberal Pope Francis. The two men get the highest vote totals in 2005 when Benedict becomes Pope. Seven years later, Cardinal Bergoglio of Argentina, who will become Pope Francis, wants to resign as Cardinal because of his opposition to Benedict’s traditional approach. When he gets the call for an audience with Pope Benedict, he thinks the Pope has agreed to his resignation. However, Pope Benedict wants to get to know the Cardinal better because his failing health has got him to consider his own resignation.

THE TWO POPES is well cast. Anthony Hopkins and Jonathan Pryce are almost unrecognizable as Pope Benedict and Pope Francis, respectively. However, the differences between the two clergymen seem vague, although the movie sides with Francis more than Benedict. Interestingly, the movie shows both men struggling to forgive themselves for past failures. THE TWO POPES has some touching moments, but its positive Christian elements are overcome by false, heretical theology promoting Marxist communism and anti-capitalism.

(FRFR, CoCo, AcapAcap, AbAb, CC, B, Ho, L, VV, S, N, A, DD, M):
Dominant Worldview and Other Worldview Content/Elements:
Strong false theology about the transition from Pope Benedict to Pope Francis in the Catholic Church in 2013 promotes Marxist communism and anti-capitalism, and indicates the filmmakers are opposed to the Church’s opposition to abortion, mixed with strong, sometimes touching Christian content that includes references to Jesus, the Virgin Mary and Scripture, and themes of friendship, repentance, forgiveness, and humility, plus a reference to same-sex marriage
Foul Language:
Two obscenities
Violence:
At least two scenes of disturbing violence such as a military man horrifically shoves a woman out of a high-flying airplane and into the ocean, and two gunmen assassinate a priest on the street, soldiers come and drag two priests away, it is said that dead bodies of people murdered by a military government in Argentina float back onto the shore
Sex:
A verbal reference to self-abuse in a series of Catholic confessions played over the movie soundtrack and some references to the sex abuse scandals in that denomination
Nudity:
Upper male nudity of an elderly person in one scene
Alcohol Use:
Characters have wine over dinner, plus there’s a scene in a bar
Smoking and/or Drug Use and Abuse:
Some smoking and it is said that members of a tyrannical military junta drugged some people opposing them to throw them out of helicopters and airplanes into the ocean; and,
Miscellaneous Immorality:
Spiritual pride, but it’s later confronted and rebuked, stubbornness, and Catholic Cardinal expresses opposition to his leader’s papacy, and Pope questions the Cardinal’s motives.

THE TWO POPES is a drama about the transition between the more conservative Pope Benedict XVI and the more liberal Pope Francis, with much of the movie focusing on two meetings between Benedict and Francis where Benedict, who’s getting frail, must decide if he should resign and hand the reigns over to his most likely successor and rival. THE TWO POPES is beautifully produced and acted, but is plagued by some ambiguity and clearly sides with Francis and his Neo-Marxist ideals. It also suggests at one point that the church should change its biblical positions against abortion and perverse immorality.

The movie begins in 2005. The Catholic world comes to standstill when Pope John Paul II dies. Cardinals from around the world gather in Vatican City to elect a new pope and must have 78 votes to reach a consensus that stands. After two rounds of voting, Cardinal Ratzinger of Germany advances to become Pope Benedict. Many are thankful because he’s theologically conservative, like the Pope before him. However, the vote is very close between Cardinal Ratzinger and Cardinal Bergoglio of Argentina. A TV news commentator says there’s a conflict between conservative Catholics like Ratzinger and liberal Catholics who want the Catholic Church to change its positions on abortion, perverse sins, the ordination of women, and letting priests marry.

Cut to Buenos Aires in 2012. Cardinal Bergoglio continues about his daily activities but asks for an audience with Pope Benedict. Once Bergoglio lands in Italy, Pope Benedict’s staff take him to Benedict’s summer residence. While there, Bergoglio brings up his desire to retire as Cardinal and enter into service to God as a priest and help his local community. Benedict is resistant to grant him his request, and the pair get into a heated conversation about the difference between compromising and changing in regard to Catholic theology and Catholic practice. Bergoglio is more liberal and wishes to move with the times while Benedict is more traditional.

Bergoglio fears that so many are turning away from the Catholic Church because of its refusal to change and reform. They table their conversation until the evening where Benedict comes to visit Bergoglio’s guest quarters. Francis watches Argentine soccer, something a pope would seldom do, which begins another conversation about their upbringings and interests.

The movie then centers on Francis in his youth. As a young boy, he grew up in church and felt called to be a priest at an early age. Unexpectedly, Francis fell in love and proposed to a young woman only to go to confession one evening and feel that God was calling him to service in the Catholic Church instead. Still, all his years of service weren’t full of sunshine and rainbows.

In the 1970s, a military junta staged a coup against the government in Argentina. Bergoglio tried to lobby the junta to protect his flock and save lives, but many of his fellow priests stood in opposition to the military and suffered for it. Afterward, Bergoglio was shunned and came to regret his decision to work with the junta. Also, the events made Bergoglio question where God was in all the agony. He began to speak more forcefully for the poor and the oppressed, but his past behavior perpetuated some feelings of unworthiness.

Pope Benedict gets called back to Vatican City and takes Bergoglio with him via helicopter. Once they arrive, Benedict comes clean that, because of his declining health, he wants to resign from his position as pope, which is why he was reluctant to indulge Bergoglio’s request for retirement. Since Bergoglio almost beat him in the first election, Benedict is confident that Bergoglio will be chosen the next pope if Benedict decides to resign.

In a lengthy scene, Bergoglio confesses to Benedict about his cooperation with the military junta to protect people and save lives. He feels he didn’t do enough to help people during that political crisis. Benedict tells him, however, that he did what he could under the circumstances and advises him that he should give the same amount of mercy to himself as he’s willing to give to others. Benedict then admits that, during the child abuse scandals in the 1990s, when he was an archbishop, he failed to keep close tabs on the case of one abusive priest who was shuffled to parish after parish in Germany. Bergoglio gives Benedict absolution. Benedict then admits to Bergoglio that he has had difficulty in recent years hearing God’s voice, but that, the other day, he heard God tell him it was okay for him to resign. The upshot is that Benedict is no longer concerned about Bergoglio becoming pope.

THE TWO POPES is incredibly cast. Anthony Hopkins and Jonathan Pryce so fully embrace their roles that they are almost indistinguishable in their portrayals of Pope Benedict and Pope Francis. However, the movie uses another voice actor to do Francis speaking Portuguese, which is a little off-putting. The cinematography is innovative making use of grand overhead shots of Italy, Rome and the Argentina countryside. The filmmakers also artfully play with the use of color in contrast to a black and white.

That said, the movie is a little too vague and coy when it comes to depicting the theological differences between Pope Benedict and Cardinal Bergoglio, aka Pope Francis. The statement by the commentator early in the movie implies that the filmmakers not only side with the ordination of women and letting priests marry but also think the Catholic Church should change its pro-life position against abortion and its position against homosexual sin. These issues aren’t mentioned again when Pope Benedict and Cardinal Bergoglio disagree about Bergoglio’s support for reform in the Church, which Benedict condemns as compromise. Thus, the filmmakers vaguely imply that Bergoglio’s support for “reform” as Pope Francis means that Francis supports changing the Catholic Church’s positions on abortion and homosexuality. In reality, however, Pope Francis has remained staunchly against abortion, favors society doing whatever it can to support pregnant and married mothers and hasn’t changed the Church’s depiction of homosexual behavior as sin, though he strongly supports a more “welcoming” attitude toward those how identify as homosexual or transgender. Pope Francis does believe, though, that some Catholics have been too “obsessed” with the issues of abortion, same-sex marriage and contraception.

Also, one scene in the movie shows Bergoglio making a speech about helping the poor and oppressed that sounds a lot like Marxist, communist and socialist redistribution of wealth. In another scene, Bergoglio helps a Catholic woman get rid of all her Marxist books so that the military junta and its secret police will not be able to use them against her. The movie never questions why any Christian would want to consult a bunch of Marxist writers in the first place, other than to develop better arguments against their Anti-Christian, unbiblical ideology. Christian conservatives, both Catholics and Protestants, have rightly criticized Pope Francis for having a too lenient, superficial position on Marxism and a too strong, superficial anti-capitalist position. The movie’s position on these matters seems even more shallow and superficial.

Furthermore, the movie’s presentation of Pope Francis as an agent of change and reform is shot through with holes.

For example, when Bergoglio takes over as Pope Francis, he refuses to wear the red elbow-length papal cape called the mozetta, which symbolizes the Pope’s authority over the Catholic Church. “The carnival is over,” he announces before going onto the balcony before the crowd for the first time. The Pope’s disdain for the ritual of the mozetta displays an ignorance of the metaphorical purpose behind such rituals. Instead of disdaining rituals like this, the Pope should explain their meaning to the people. To say it’s all just part of a carnival is an easy, shallow argument. So is Bergoglio’s argument for change and reform, which in the movie sounds like change for change’s sake or, worse, to appease self-indulgent sinners, for politically correct reasons. Finally, when Pope Benedict says he’s not hearing God’s voice, perhaps that’s because he’s not reading and studying the Bible, God’s Holy Word, like he should.

THE TWO POPES has some touching moments between Pope Benedict and the future Pope Francis that make the two men seem relatable and inspiring. However, it ultimately comes down on the side of false leftist theology, including dialogue that sounds like Marxist Liberation Theology, which is communistic, anti-capitalist and heretical. The movie also contains a couple brief sexual references and brief disturbing violence, including a scene where a military man shoves a woman out of an airplane into the ocean down below, and a scene where two gunmen assassinate a priest on the street.