THE WAGES OF FEAR 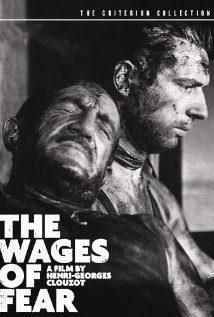 THE WAGES OF FEAR is a restored, re-release of the 1953 French classic about four men who are forced to face their greatest fears, including death, as they transport two truck loads of nitroglycerine across rugged Latin American terrain. However, the greatest obstacle they face is themselves as their facades are stripped away and their fears are exposed. THE WAGES OF FEAR is technically excellent; however, its existential view of life makes the film extremely bleak.

THE WAGES OF FEAR is a re-release of the 1953 French classic about four men who are forced to face their greatest fears, including death, as they transport two truck loads of highly volatile nitroglycerine across rugged Latin American terrain. The film begins in Las Piedras, an impoverished Latin American town where several Europeans work for an exploitative petroleum company. Mario (Yves Montand) is a young Parisian who longs to return home. Linda, a local barmaid, is in love with him. Suddenly, an oil well explodes 300 miles away. The only way to put out the raging fire is to explode it with nitroglycerine. Unfortunately, the nitro must be driven by truck across treacherous terrain. The SOC promises to pay $2,000 to each driver who survives the trip. Four men are chosen to drive two trucks: Mario, Jo, Luigi, and Bimba. The drivers quickly encounter obstacle after obstacle. However, the greatest obstacle is the men themselves as their polished facades are stripped away and their fears are exposed.

THE WAGES OF FEAR is a technically excellent film with evocative black-and-white cinematography. The international cast, especially Montand and Vanel, are superb. The main drawback of the film is its existential underpinnings–a bleak vision of life where in the end, even those who win, lose, for death triumphs over all.

Rent or Buy THE WAGES OF FEAR: