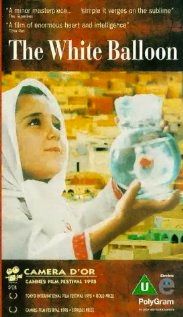 THE WHITE BALLOON is a simple story of a little girl who wants a goldfish. Her encounters with various people as she first loses the money to buy it and then enlists their help in retrieving it delight the audience with warmth and charm. Told with color and positive qualities of family and community, it has no sex, violence, nor strong language.

(B, M) Moral worldview focussing on family and a caring community: two small incidences where a young boy lies about wanting gold fish for his mother, but sells them; and, snake charmers discuss cheating a young girl

THE WHITE BALLOON is the story of a seven-year-old girl named Razieh who wants a new goldfish. The one she likes dances in its bowl and is fatter than the one she has at home. It is the eve of a New Year in Teheran, and a gold fish is symbolic of the celebrations. She cajoles her mother into giving her the money, with strict instructions to bring home the change. Along the way to the gold fish shop, Razieh is distracted by a couple of snake charmers and would have lost her money to them, but with her sheer determination, demands her money back. To a curious little girl like Razieh, the fascinations of the city are many and distracted again, she drops the money into an iron gate. Razieh enlists the help of many interesting characters to retrieve the money, spelling real charm and allure.

The director’s keen eye and feel for his characters capture their nuances and gestures. There is not a mean bone in this story. It does have a dishonest boy and dishonest snake charmers. Otherwise, THE WHITE BALLOON has a strong moral, family and community sense, where kindliness and honesty prevail. The film’s innocence is as refreshing and alluring as the wide-eyed innocence of little Razieh. With no strong language, violence, sex nor nudity, THE WHITE BALLOON is simply charming.