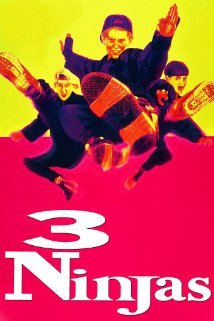 When a family is threatened by an evil arms dealer, the THREE NINJAS come to the rescue. Trained by their Japanese grandfather in martial arts, the brothers use their skills to stop the criminals. An violent tale in Walt Disney packaging, THREE NINJAS entices children to mimic aggressive behavior. The movie presents Ninja as a respectable way of life even if it is steeped in mysticism, superstition and nominalism. Also, THREE NINJAS has many story loopholes and a hokey plot.

The THREE NINJAS begins in a remote mountain village where a Japanese grandpa trains his grandsons, Michael, Jeffrey and Sam Douglas, as Ninjas. Grandpa confuses his assassination techniques with a philosophy of harmony. Returning home, their Asian-American mother is delighted with the Ninja skills, but Dad is absorbed in his work with the FBI. With evidence against weapons’ dealer Hugo Snyder, Dad is threatened to drop charges or suffer harm to his family. When the FBI calls Snyder’s bluff, thugs kidnap the boys, but they are no match for the boys, who pelt them with jelly beans, pizza and eggs. Frustrated, Snyder sends others to get the boys. Thus, THREE NINJAS climaxes in a martial-arts showdown.

An violent tale in Walt Disney packaging, THREE NINJAS entices children to mimic the aggressive behavior. The combination of Ninja with exciting music, humor and characters is propagandistic. Ninja combat is based on Oriental religious philosophy, which opens the mind up to deadly spiritual influences. The movie attacks the biblical worldview by presenting Ninja as a respectable way of life even if it is steeped in mysticism, superstition and shaman. Also, THREE NINJAS has many story loopholes and a hokey plot.