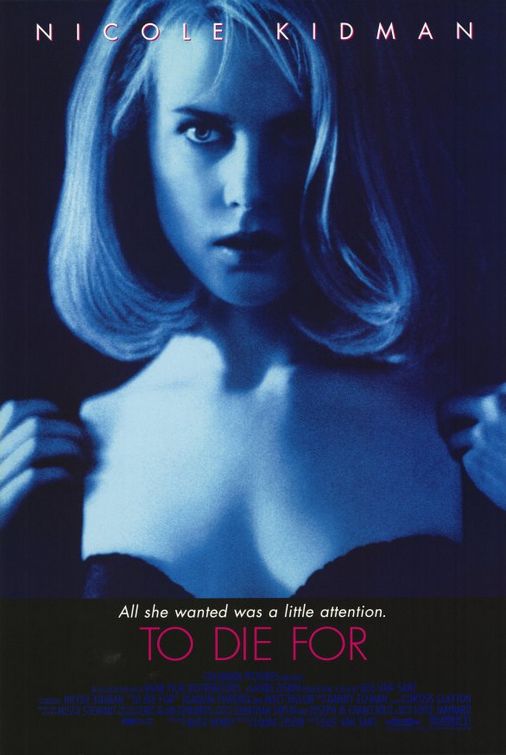 In spite of a humorous script by Buck Henry which examines the dark side of our addiction to the media, TO DIE FOR suffers from an inherent misogyny which equates great beauty with uncontrollable selfishness. Suzanne Stone Maretto, played exquisitely by Nicole Kidman, is an ice queen who wants nothing more than to attain the highest ranks of mass media success. She uses her sex and local disadvantaged teenagers to achieve success, but gets her just desserts in the end. Though brilliant, the movie legitimizes flagrant immorality with humor and cannot be recommended.

In TO DIE FOR, Suzanne Stone, played by Nicole Kidman, is a beautiful, strawberry-blond ice queen who wants nothing more than to attain the highest ranks of media success. From the opening frame, the audience knows her husband has been killed. “How?” and “why?” is revealed in this black comedy. Suzanne, from a proper New England family, marries Larry Maretto (Matt Dillon), a crass Italian hunk. On her honeymoon, Suzanne sends Larry off fishing while she cozies up to a speaker at the National Broadcasters Convention. From him, she thinks that she learns that she can use her sex to get anything she wants. Soon, after forcing a local cable station to hire her, she realizes that Larry is standing in the way of her success, so she makes plans to have a teenager, whom she seduces, kill Larry.

TO DIE FOR is a very funny movie. Superb writing establishes just enough moral counterpoints to expose the foibles of modern man, and definitive direction takes an unusual subject and makes it captivating. Nicole Kidman deserves all the rave reviews she is getting. However, in spite of the nod to justice, this is a film that displays adultery, sex and violence with enough humor to legitimize it. Thus, with all its moral overtones, TO DIE FOR is not a movie that can be recommended.

Writer: Buck HenryBASED ON A NOVEL BY: Joyce Maynard