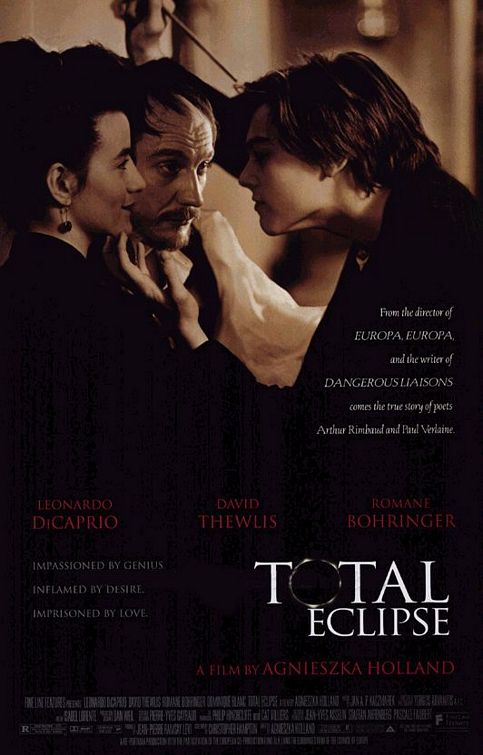 TOTAL ECLIPSE is an ambivalent movie about two of France's greatest poets Arthur Rimbaud and Paul Verlaine. The movie shows the complex and twisted homosexual friendship between the two poets which destroyed Verlaine's marriage and dramatically changed both their lives. Though Rimbaud supposedly repented and converted at the end, the movie is filled with heterosexual fornication and homosexual sodomy and should have been rated NC-17.

(NA, C, VVV, SSS, NNN, C, Ab, A, D, M) Pagan worldview with heavy homosexual elements & some references to salvation experiences; 15 obscenities & 7 profanities; extreme violence including stabbing a man's hand with a knife, shooting a man's hand, burning a woman's hair, throwing a pregnant woman to the ground, throwing aside a baby in a carriage, & threats of violence; heterosexual & homosexual sex with vivid depictions of fornication & sodomy; full male & female nudity & various states of partial nudity; references to repentance, conversion & accepting Jesus Christ as savior as well as to trading a soul for sex; alcohol use seen as poetic inspiration; smoking an unidentified substance which appears to be hashish & not tobacco; and, vandalism, theft, rudeness, & scatological behavior

TOTAL ECLIPSE examines the lives of two of France’s greatest poets, Arthur Rimbaud and Paul Verlaine. Rimbaud overshadows Verlaine throughout the film and their lives. Sixteen-year-old Rimbaud, a brilliant poet, goes to visit Verlaine and does everything he can to disgust Verlaine’s wife and mother-in-law. Yet, Verlaine is attracted to this unconventional, handsome rebel. Eventually, Rimbaud gets a drunk Verlaine to sleep with him. The two run away to the ocean, Brussels and England. When Rimbaud says he is leaving, Verlaine shoots him and is thrown in jail. When he next meets Rimbaud, Verlaine tells him that he has accepted Jesus Christ. Yet, in the end, we see that Verlaine has renounced Christ, and Rimbaud at his deathbed, accepted him.

TOTAL ECLIPSE is a brutal, violent pornographic movie. It focuses on the depravity of man, although it gives a nod at the end to the need for repentance and conversion. Clearly, Verlaine renounced the faith he once claimed and is possessed by the demon of homosexuality. Although it is true that God can save anyone, Rimbaud’s conversion is not the focus of this story, but the homosexual relationship is. One walks away with a feeling of disgust, wondering why the MPAA did not rate this film NC-17.