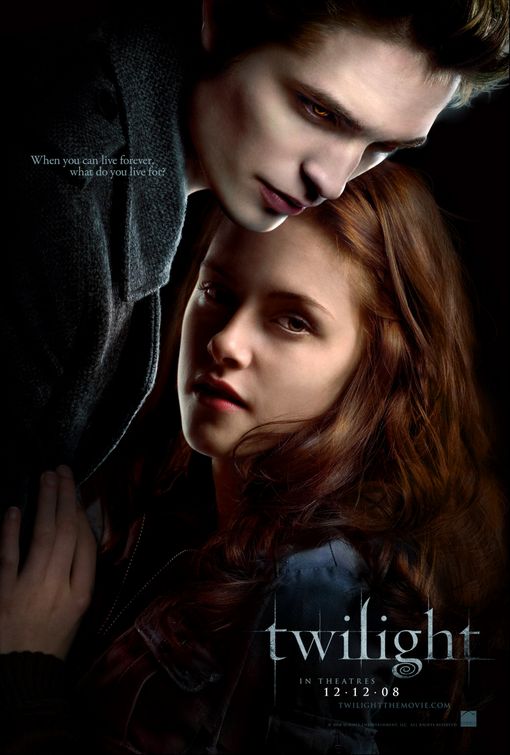 TWILIGHT is the first movie adaptation of the TWILIGHT series by author Stephenie Meyer about a teenage girl who falls in love with a boy who happens to be a vampire. The movie opens with 17-year-old Bella going to live with her father in tiny, rainy Forks, Washington. In school, she runs into the mysterious family of Dr. Cullen, the foster father of Edward, her incredibly handsome biology lab partner. Edward gives her the cold shoulder in a weird way, but then seems much more friendly, though still mysterious. Eventually, Edward admits that his family are vampires who have disciplined themselves to consume only animal blood. He tries to convince Bella he’s too dangerous to love, but their smoldering passion grows.

This first entry is just as much a teen romance movie as it is a vampire horror movie. The weak link is Edward Pattinson’s sometimes overly melodramatic performance. Kristen Stewart does a much better job as Bella. Though this first entry does not get into the strange, occult issues in the rest of the series, it presents smoldering teenage passions apart from God. Thus, TWILIGHT warrants extreme caution.

(RoRo, O, B, C, Pa, L, VV, S, N, A, MM) Strong, slightly mixed Romantic worldview lacking biblical theology where teenagers go by their feelings rather than common sense or morality with some occult content about the unique powers of an unusual brand of vampire characters who can run fast, fly, jump long distances, read minds, and sometimes read the future, but some moral, redemptive elements of good versus evil and sacrificing oneself for the people you love, plus Indian character mentions pagan belief that his people were descended from wolves; one light obscenity and five light profanities; strong, sometimes scary, violence with some blood, but not very graphic or heavy, such as teenager stops out-of-control van from killing another teen, vampire chases a deer and picks it up deftly to presumably eat it, implied vampire attack, evil vampire flings teenage girl across a room several times, evil vampire starts to bite teenage girl’s arm and suck her blood, implied killing and burning of evil vampire, teenage girl hits her head against post during fight, two vampires fight and fling one another across a room, teenage girl falls on breaking glass and her leg gets stuck by a chard so she begins to bleed, and evil vampire deliberately breaks victim’s leg; passionate teenage kissing, smoldering teenage passion and teenage couple in throws of passion start planning to fornicate on bed but they stop suddenly; upper male nudity and quick shot of teen girl’s panties on her; implied beer drinking; no smoking; and, teenage girl keeps secret from her father and others, father and daughter have awkward relationship but they start warming up to one another, teenage girl admonishes father to eat a salad occasionally, teenage girl lies to her father about what she really feels about him in order to protect him from evil vampire, and vampire reads minds of people in restaurant, saying that most of them are thinking about sex or money.

TWILIGHT is the first movie adaptation of the TWILIGHT series by author Stephenie Meyer about a teenage girl who falls in love with a boy who just happens to be a vampire. This first entry is just as much a teen romance movie as it is a horror movie about vampires.

TWILIGHT opens with 17-year-old Bella leaving her mother, who’s re-married a baseball player in the minor leagues, and joining her father in the tiny, rainy town of Forks, Washington. In high school, Bella meets the mysterious Cullen family, including 17-year-old Edward, her mysterious, but incredibly handsome, biology lab partner.

Edward gives her the cold soldier in a weird way, then suddenly disappears for a few days. When he returns, he seems much more friendly, but still mysterious.

Intrigued, Bella keeps pressing Edward to open up to her. He continues being mysterious, until he just happens to stop a van, which has lost control, from hitting and killing her. Eventually, after some clever snooping by Bella into local Indian legends, Edward reveals to Bella that he and his foster father and mother are vampires who have disciplined themselves to only consume animal blood.

Edward is afraid that his romantic attraction to Bella will release his bloodlust. He tries to scare her away, but Bella becomes more infatuated. They decide to make their romance public while keeping the Cullen family’s secret. A group of nomadic vampires, however, have killed a couple humans. One of them targets Bella as her next victim, but Edward and his family decide to protect her.

The weak link in this movie is the performance of Robert Pattinson as Edward. He does not deliver the movie’s passionate lines and action as convincingly as Kristen Stewart, who does a much better job of conveying Bella’s emotions. Also, the action in the third act is rather pedestrian. It doesn’t generate as much thrills and suspense as it could or should have done.

That said, the movie holds one’s interest. The character arc of Bella’s growing relationship with her estranged father is quite moving at times. Hopefully, the sequels to TWILIGHT will deepen these redemptive, inspiring moments and Pattinson will become much more comfortable in portraying Edward’s emotions. The latter event may indeed happen, but reports about the content of the other three books in the series do not lend much credence regarding the possible content in the future movie sequels. For example, one Christian critic said, concerning the third and fourth books, that Bella makes some disparaging remarks about marriage and having a child. The theology and history about the vampires also seems to be occult and non-Christian as well.

TWILIGHT the movie doesn’t contain any overt references to God or religion beyond the movie’s brief explanation and portrayal of the special powers its vampires have. There is also one scene where Bella learns that the local Indians believe they were descended from wolves, but, from what we understand, this aspect doesn’t get much focus until the second book in the series. Apparently, the local Indians and the vampires do not get along.

TWILIGHT does not contain much foul language or teenage vulgarities, and the strong violence is not extremely bloody or graphic. There is, however, one scene in Bella’s bedroom where she and Edward almost start to fornicate but Edward has to stop himself, because he’s still scared that his vampire lust may take over his moral conscience. In other words, unmarried sex is okay for teenagers, but murder is not.

Because of this implication, and the movie’s vampire theme, TWILIGHT warrants strong extreme caution. Apparently, the author of the book series is a Mormon who attended Brigham Young University, but the often bizarre, non-biblical and anti-biblical teachings in that religion does not inspire confidence that the author knows, much less believes what the Bible actually has to say about God, truth, history, and morality.

There are ways to put a Christian worldview in vampire stories, as Bram Stoker’s original DRACULA novel does, and as do movies like the 1931 DRACULA with Bella Lugosi and the 1959 HORROR OF DRACULA with Christopher Lee and Peter Cushing. TWILIGHT gives no evidence that the film’s producers are going to do that with the movie sequels.

They are likely, however, to continue to capitalize on the great interest that teenage girls seem to have for the good-looking young male stars they are assembling for this movie franchise. At the screening MOVIEGUIDE® attended, there were some female screams regarding the featured young male actors. In light of that, parents probably should remind their daughters about the dangers of getting too wrapped up in physical appearances and heavy teen romance. It’s much better to be God-fearing, warm-hearted, conscientious, sincere, honest, biblically astute, and wise rather than “cool,” good-looking and on the make.