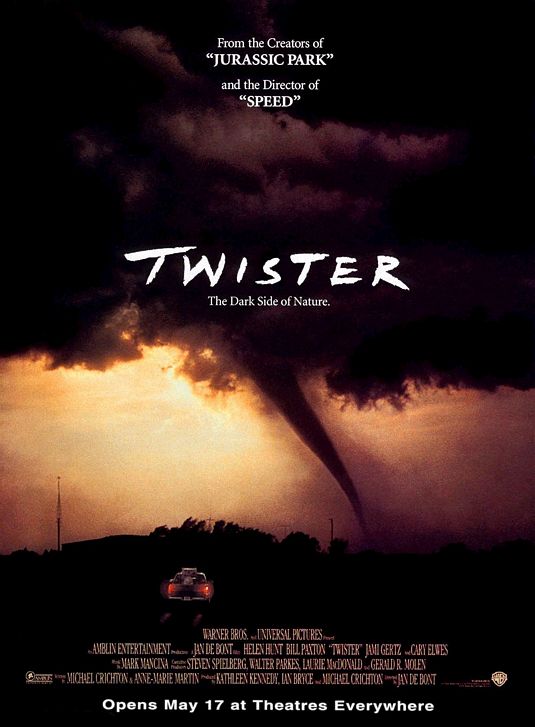 TWISTER is the latest special-effects disaster movie to blow into town. It is a showdown movie about two competing scientific teams racing to analyze the big one so they can design a system to better predict tornadoes. Regrettably, TWISTER suffers from some moral, structural and credibility problems, including many obscenities and profanities, destructive violence and frightening situations, but those who like disaster movies may find some merit in TWISTER.

The latest special-effects disaster movie to blow into town is TWISTER. Jo Harding, played by Helen Hunt, and her crew of young scientists live to chase down unpredictable tornadoes so they can develop the scientific tools to better predict these destructive forces. Jo’s estranged husband, meteorologist Bill Harding, played by Bill Paxton, tries to get Jo to sign their divorce papers so he can marry Melissa, and ends up joining in one last chase. Soon, the conniving Dr. Jonas Miller throws down a challenge to Jo and Bill to get to the big one first. Jo’s team and Dr. Miller’s team just miss several opportunities to use their tracking devices. When the big one finally comes, mass destruction ensues.

The special effects team has created a sense of doom, but the direction fails to achieve a frightening edge. Perhaps, this is because unlike the animal villains of JAWS and JURRASIC PARK who were consciously seeking their human prey, tornadoes cannot will themselves to pursue the hero and heroine. The most disturbing aspect of the movie is that our hero, Bill, constantly takes the Lord’s Name in vain. Very few parents want their children mouthing these words. Regrettably, TWISTER suffers from structural and credibility problems, but those who like disaster movies may find some merit in it.