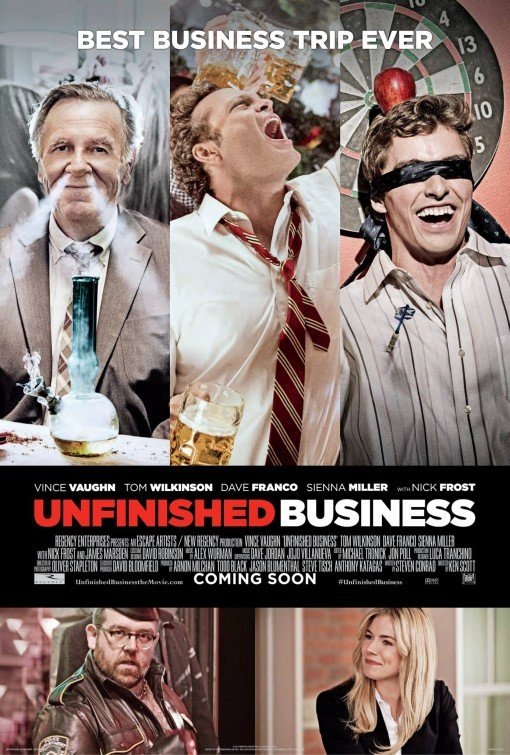 UNFINISHED BUSINESS is a comedy about three mismatched American businessmen forced to travel to Germany to make a business deal. Vince Vaughn stars as Dan, a married man with two children who decides to quit his job when his demeaning female boss tries to give him a pay cut. Dan teams up with a 67-year-old employee forced to retire and a young, dimwitted man. A year later, their minerals business is not doing well. However, they can save their company if they go to Berlin, Germany to close a major deal with another American businessman, who’s attending a homosexual festival.

Comically, UNFINISHED BUSINESS offers a mad dash of bizarre meetings and misadventures reminiscent of the John Hughes comedy PLANES, TRAINS AND AUTOMOBILES. It’s fast moving and tightly written. Also, the movie has a Pro-American, pro-capitalist mindset. Vince Vaughn is good as a married man committed to his family. All that said, UNFINISHED BUSINESS is fatally marred by lots of strong foul language and immoral sequences of drunken behavior, crude sexual activity, extreme nudity, and perverse homosexuality, played for laughs.

(PaPa, BB, CapCap, PP, HoHoHo, LLL, V, SSS, NNN, AAA, DD, M) Strong mixed pagan worldview with strong pagan content and strong moral, pro-capitalist elements showing American ingenuity winning out over European protestors, undercut by sequences of extremely aberrant sexual behavior and nudity played for laughs, including an extended scene discussing and somewhat depicting homosexual debauchery intended for laughs; 77 obscenities (more than half are “f” words) and four strong profanities; light comic violence includes car swerves to avoid hitting reindeer and slides on its roof, there’s a drinking game where two men slap each other, drunken man hit with dart in a bar, men disregard a semi-violent protest at a G8 economic summit; very strong and strong sexual content in some scenes played for comedy includes lengthy crude comical scene in bathroom used for anonymous sex at a sadomasochistic leather event for homosexuals where men are searching for a potential foreign business partner who’s homosexual, depicted fornication in one scene, crude sexual insults, crude and frank discussion, men visit unisex sauna in Germany where men and women are topless, young man comments repeatedly on seeing topless women at unisex sauna, father tells teenage son that self-abuse is “natural,” older married man wants a divorce and seeks other women in sexual situations, drunken older man passes out amid a bunch of topless women having a pillow fight; several images of male private parts in a homosexual context and many shots of topless women, plus shots of rear nudity, mostly played for crude laughs; lots of drinking and drunkenness, plus movie takes place mostly in Germany, where underage drinking is allowed; no smoking but marijuana use in one scene and older man takes Ecstasy; and, man steals things from hotel rooms, bullying but rebuked, implied anti-capitalist leftist protestors but seemingly not endorsed by movie, and graffiti.

UNFINISHED BUSINESS is a comedy about three mismatched American businessmen suddenly forced to travel to Germany to make a complex business deal. UNFINISHED BUSINESS has some clever, funny comedy celebrating American knowhow in a pro-capitalist setting, but its positive parts are heavily undercut by lots of strong foul language and sequences of extremely aberrant sexual behavior and nudity played for laughs, including an extended scene discussing and depicting homosexual debauchery.

The movie’s story follows Dan Trunkman (Vince Vaughn), a hardworking, loving family man with a wife and two troubled children. He quits his sales job in the opening scene, saying he’s had enough of his female boss Chuck (Sienna Miller), and that he can start a company selling metals that still respects its employees and their quality of life.

Only two men join him: a 67-year-old named Timothy (Tom Wilkinson), who has just been laid off due to his age but wants to work, and a young guy named Mike Pancake (Dave Franco), who followed Dan out the door after failing a job interview due to his stupid answers. It’s unclear throughout the movie whether Mike has a mental disability or is just weird and naïve.

After a year of largely failing, the trio gets a chance to close a major deal but have to travel to do so. They head to Portland, Maine, only to learn that the real deal is to be made in Berlin. So off they go, nearly penniless, to Germany with only blind hope that they will succeed; only to find that Dan’s former boss meets them there as competition for the deal they thought they had sealed.

What ensues is a mad dash of bizarre meetings and misadventures reminiscent of the John Hughes classic comedy PLANES, TRAINS AND AUTOMOBILES. Regrettably, Writer Steve Conrad and Director Ken Scott stoop to real lows for shock comedy at some moments of the movie, including the naïve Mike’s attempts to be with a woman for the first time and a search for a homosexual businessman in the middle of a homosexual street festival with sadomasochistic overtones.

Despite that content, UNFINISHED BUSINESS is so fast moving and tightly written that perhaps 70 percent of the movie is largely inoffensive.

For example, Vince Vaughn’s character is portrayed as a happy and devoted family man who loves marriage and his children, and is deeply concerned over his children’s problems with bullies. He is also shown as a proud and bold American entrepreneur and capitalist. This is underscored during a series of very funny running gags where he’s shown trapped in a glass enclosure called “American Businessman 42” when he can’t find a hotel room in Berlin. He turns his annoyance with German society into a positive in a series of funny interactions where he speaks highly of the American can-do spirit. He later winds up accidentally running in the Berlin marathon and using it as an inspiration for success and never giving up despite the obstacles.

On a side note, it’s interesting that, in the movie, the homosexual businessman is seen as fairly miserable about his search for anonymous sexual experiences. Whether that can be translated into anything more than that is hard to say.

All that said, there are other problems with UNFINISHED BUSINESS besides its raunchy content.

For example, the young man in the group is never fully explained as to whether he is mentally challenged or just extremely childlike and naïve. He says that he lives in a group home as counselor to mentally challenged people, and at the end he is seen hugging his three best friends, played by actors who clearly have Downs Syndrome. The movie has fun with the man’s idiotic answers and silly situations, but he’s portrayed overall in a positive way, despite his naïve, crude understanding of sex.

Also, the old businessman in the group has a relentlessly negative outlook on his long marriage, saying he’s “never made love” to a woman because he never really loved his wife, and she’s been his only sexual partner. By the end of movie, he hires a “sexy maid” at one of his hotel rooms and gets her mixed up with Dan’s room. In the end, he joyously says he got an instant divorce via a phone app and is seen leaving with the “normal” hotel maid who initially came to his room by accident.

There is also a lot of drinking and drunken behavior in UNFINISHED BUSINESS, some especially shown at a youth hostel where some teenagers might be drinking, though such underage drinking is legal in Germany. The old man is wistful about the wildness and participates, including taking the illegal drug “Ecstasy” before dancing at a nightclub and winding up passing out amid a bunch of topless women having a pillow fight.

Sadly, the movie’s script simply didn’t have to go anywhere near so crudely as it does in order to draw big laughs. It’s a shame because the movie has much to say about our times and the famous American spirit to rise above difficulties and setbacks on the way to success. Vince Vaughn is terrific in UNFINISHED BUSINESS. He’s an openly Republican rarity in Hollywood, and it’s too bad he let his movie’s Pro-American, pro-capitalist message get buried by its raunchy sexual immorality. The movie also has more than 40 “f” words and other obscene dialogue. Ultimately, therefore, UNFINISHED BUSINESS is better off being unseen.

Michigan Star Leads Team to Victory: ‘We Have Love for the Lord’

Hailey Bieber Shares Health Update: ‘A Lot of You Can Overly Relate and Understand, We Got This’

JoJo Siwa to Host Children’s & Family Emmy Awards, But Is It Family-Friendly?