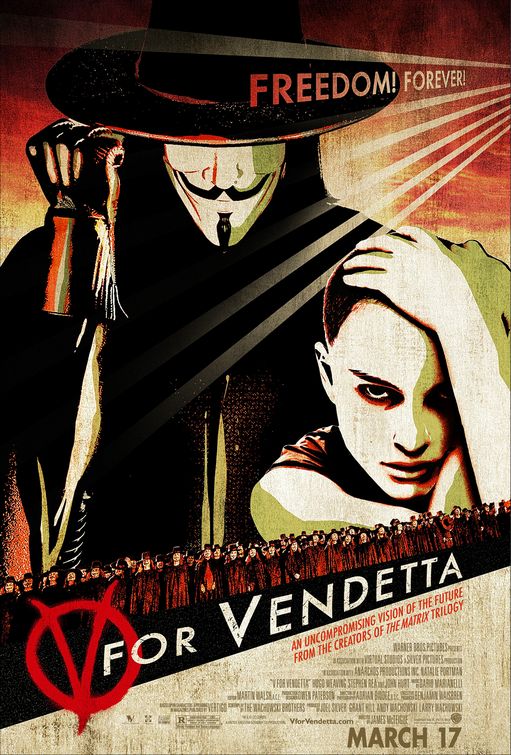 V FOR VENDETTA is a science fiction movie about a terrorist-protagonist who engages in violence to overthrow a fascist government. Set in futuristic Britain, the country is controlled by a corrupt state that oppresses and manipulates its citizens with fear-tactics, religious rhetoric and propaganda. The totalitarian government is headed by a conservative demagogue who persecutes homosexuals, executes those found with copies of the Koran, enforces state-sanctioned torture, and secretly participates in bio-terrorism. Under these conditions, a masked vigilante, known only as V, plots to spur a revolution through violence and revenge.

V FOR VENDETTA is an abhorrent, expensive work of leftist propaganda. Based on a graphic novel by left-wing writer Alan Moore, the oppressive leader in the movie adaptation has been turned into an exaggerated British version of George W. Bush. The hero is a violent terrorist, and the victims include Muslims and homosexuals oppressed by a hyper-fundamentalist Christian government. Furthermore, the Koran is described as “beautiful,” homosexuality is glorified and Christian leaders are depicted as lunatics and pedophiles. The movie's strong politically correct humanist worldview, anti-Christian sentiments and pro-terrorist violence may incite terrorist violence by Muslim and left-wing extremists.

(HHH, PCPCPC, AbAbAb, Pa, FR, HoHo, APAP, Fe, LLL, VVV, SS, NNN, A, MMM) Very strong humanist, anti-religious, politically correct worldview that is pro-terrorist and includes many anti-Christian elements such as a creepy Anglican bishop desires to sleep with an underage female, and it is implied that a fascist dictator is a conservative Christian who persecutes homosexuals, Muslims and bans the Koran and other books, plus some pagan elements and false religious elements in a scene in which the Koran is called “beautiful,” strong homosexual content in a politically correct manner including a lesbian kissing scene, strong anti-American bias including a mocking rendition of “My Country ‘Tis of Thee” and radical feminist comments from Gloria Steinem are heard; 29 profanities and 19 obscenities, including some strong profanities and "f" words ; very strong graphic violence including several action scenes in which men are cut up with swords and shot, lots of blood and gore (especially at end), implied biological experiments on people, and several torture scenes; depicted sexual immorality includes depicted lesbian kissing and naked homosexuals huddle together in photos resembling a perverted Mapplethorpe exhibit; extensive full frontal male and female nudity in a few scenes portraying naked and deceased concentration camp victims piled up in a pit; one scene of light alcohol use; no smoking; and, moral relativism, deception, bad role models, utilitarianism, brief talk about "tolerance" but the movie clearly has little or no tolerance for religion and hence is hypocritical, movie credits include sounds of radical Black Muslim statements by Malcolm X and unisex statements by radical feminist Gloria Steinem, title character uses SLA/Patty Hearst techniques on a sympathetic woman, and a strong theme of revenge is only partially rebuked.

V FOR VENDETTA is a sci-fi comic book movie about a violent terrorist-protagonist who engages in violence to overthrow a totalitarian fascist government with Christian overtones. The totalitarian government depicted in the movie also has overtones of comparison to the Bush administration in the U.S., including its fight against terrorism. As such, V FOR VENDETTA is clearly on the side of President Bush’s non-religious critics, whose tactics sometimes seem to give aid and comfort to the terrorists instead of contributing honest political criticism.

The narrative takes place in futuristic Britain, which has become an Orwellian 1984-type society controlled by a corrupt state that oppresses and manipulates its citizens with fear-tactics, hellfire-and-brimstone religious rhetoric and a media-machine akin to the Nazi’s Ministry for Public Enlightenment and Propaganda. The totalitarian government is headed by Chancellor Adam Sutler (John Hurt), a temperamental demagogue who addresses the nation via strategically placed TV screens, delivering rousing speeches about the importance of his administration’s policies, as well as stern warnings about God’s impending judgment upon the wicked. Sutler is both conservative and religious, which is reflected in his administration’s slogan, “Strength through unity, unity through faith.” Under Sutler’s leadership, the government persecutes homosexuals, executes those found with copies of the Koran, engages in state-sanctioned torture, and participates in bio-terrorism.

It‘s under these conditions that a masked vigilante, known only as V (Hugo Weaving), plots to spur a revolution, which begins when he bombs two London landmarks and temporarily hacks into the government-controlled airwaves. V announces his goal to blow up Parliament exactly one year later, and beseeches his fellow citizens to join his coup d’etat. Shortly after his message, the mysterious rebel eludes the pursuit of the government’s Secret Police, and rescues Evey (Natalie Portman) in the process. While initially afraid of V’s sermons endorsing revolution through death and destruction, Evey is eventually indoctrinated by V’s silver-tongued charm and becomes his improbable protégé.

V FOR VENDETTA is based on a graphic novel by left-wing British writer Alan Moore, who has already seen several movies adapted from his works, including FROM HELL, THE LEAGUE OF EXTRODINARY GENTLEMEN and CONSTANTINE. Moore has publicly distanced himself from each of his big-screen adaptations (all of which have been failures), most recently calling V FOR VENDETTA “rubbish” after reading the screenplay. Discerning viewers will certainly agree that V FOR VENDETTA is indeed rubbish, albeit probably for different reasons than Moore’s.

The leader of oppression in the movie has been updated from the Margaret Thatcher-influenced administration in Moore’s comics to a post-911 George W. Bush. Overtly teetering on the furthest edge of the political left, screenwriters Andy and Larry Wachowski paint their villain with many of the negative qualities alleged by Bush’s opponents (Sutler is deceptive, homophobic and a religious-fanatic), and add a fair share of Nazi-inspired imagery. Like most bad art, their agenda is as subtle as a heart attack, and their thinly veiled propaganda is as offensive as their screenplay’s evil antagonist.

As Bush-backlash political movies continue to roll out off the Hollywood assembly line, V FOR VENDETTA may be the most ridiculously pretentious of the bunch. Are we so far removed from 911 that Americans can be asked to stomach a movie in which the hero is a violent terrorist and the victims are Muslims oppressed by a hyper-fundamentalist Christian government? Do they expect Americans to support a movie in which the Koran is described as “beautiful,” homosexuality is glorified and Christian leaders are depicted as lunatics and pedophiles? Perhaps director James McTeigue and the brothers Wachowski suffer from some sort of mental dyslexia, because they seem to have their villains, heroes and victims miserably reversed.

To be fair, it should be pointed out that the movie is not without its rations of creative attributes. The art direction is often impressive, including a visually interesting scene with dominoes falling (and fireworks exploding) to form a “V.” Action aficionados have plenty of well-choreographed fighting scenes to appreciate, and culture vultures, hipsters and aspiring intellectuals will have their credentials affirmed when they recognize the movie’s nods to the Velvet Underground, William Blake and Max Ernst. More often, however, they will be annoyed by the screenplay’s pseudo-intellectual jargon such as “Beneath this mask there are ideas, and ideas are bulletproof,” and “When you have no fear, you are completely free.” It’s a wonder they didn’t include other deceptively-empty statements such as “Everything I need to know I learned in kindergarten” or “Give peace a chance.”

V FOR VENDETTA is also a very scary and dangerous movie because it is liable to incite more political terrorism by Muslim fanatics and left-wing ideologues. Of course, contrary to the skewed political theories in the movie, Parliament is actually a symbol of democracy, not totalitarianism. And, fascism is actually a left-wing, atheist heresy, not a development of Christianity. Finally, the Koran is not a beautiful religious text, but a deceitful, hateful one that leads its followers away from God and away from God’s Law, Grace and Truth.