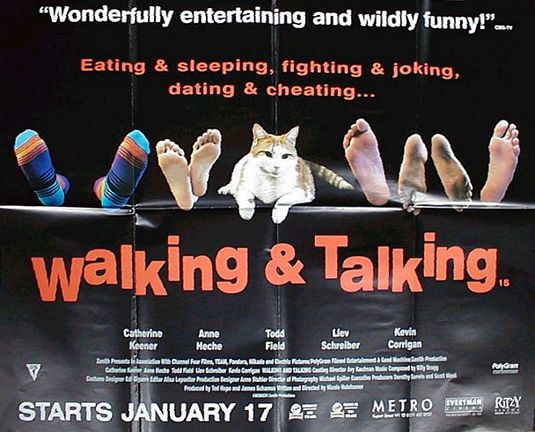 WALKING AND TALKING is a low-budget, no-name romantic comedy that is neither romantic nor comic. Amelia and Laura are best friends approaching thirty. Both sort out the relationship problems in their lives. Without wit, charm or feeling, this adults only movie may leave you thinking and wondering why you ever saw it.

WALKING AND TALKING, with a no-star cast, is a romantic comedy from MIRAMAX that is neither romantic nor comic. Laura is a therapist-in-training, and Amelia her best friend. Laura is engaged to her live-in boyfriend, Frank, but she finds that she is attracted to her patients. Amelia suffers from a cat with cancer and the pain of recently being dumped by her porno-addicted boyfriend. She tries to rectify the situation by saying yes to the advances of a homely video sales clerk. Life seems grim for these two twenty-something fragile women, but for no real reason, Laura gets back together with Frank, and Amelia returns to her boyfriend who has sworn off pornography.

A slight, poorly written movie, it doesn’t have the wit, charm or feeling of the MIRAMAX romantic comedy BEAUTIFUL GIRLS. Without the anchor of divine intervention, or even strong family ties, these two women drift in the wind, alone. At one point in the story, they get up the courage to ask each other, “What is it like for you?” They both answer, very, very lonely. WALKING AND TALKING does have the taste and restraint however, not to show sex scenes, but it does have ample amounts of obscenity and profanity. WALKING AND TALKING will probably leave you wondering why you went to see it.