WELOME TO THE DOLLHOUSE 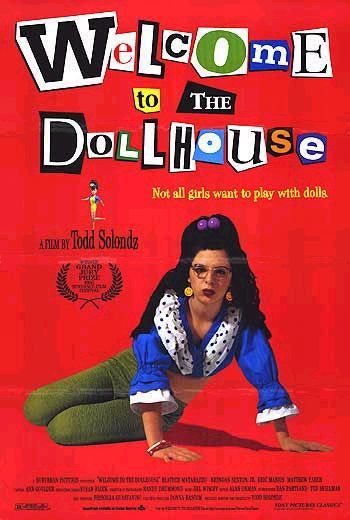 In WELCOME TO THE DOLLHOUSE, seventh-grader Dawn Wiener is neither pretty nor popular and suffers cruel torment at home and at school. She is infatuated with the singer in her brother's band and taking revenge on her younger sister, the family favorite. The movie is a brilliant and painful look at the age of puberty, but there is an underlying strain of meanness, malicious name-calling, strong language, blatant sexual references, drugs, and undercurrents of violence.

WELCOME TO THE DOLLHOUSE is the story of the awkward trials of seventh-grader Dawn Wiener, who is neither pretty nor popular. Dressed in true geek-style with thick glasses, Dawn is relentlessly belittled, while her young tutu-clad sister, Missy, is the family favorite. Dawn is called names and jeered by everyone. She becomes infatuated with the singer in her brother’s band, seeing him as her prince who will take her away from her torments, yet she is rejected. Romance of sorts finds her in the form of a troubled classmate who makes “dates” with her under the guise of rape threats. Everything slowly builds for Dawn, who finally takes revenge on her younger sister which results in a kidnapping. The family finds her sister, and Dawn finds life unchanged.

This movie won the Grand Prize at this year’s Sundance Movie Festival. Well-crafted and insightful the movie offers a precise look at the difficult years of puberty. Despite its comic-drama, however, the movie is relentlessly mean-spirited. The bullyings, name-callings and underlying sense of violence carry an edge of cruel desperation. Without the crucial network of wise adults to lead the way, the young in this movie resort to drugs, stealing, cheating, lying, running away from home, and foul language. WELCOME TO THE DOLLHOUSE shows us empty lives guided by pagan values.