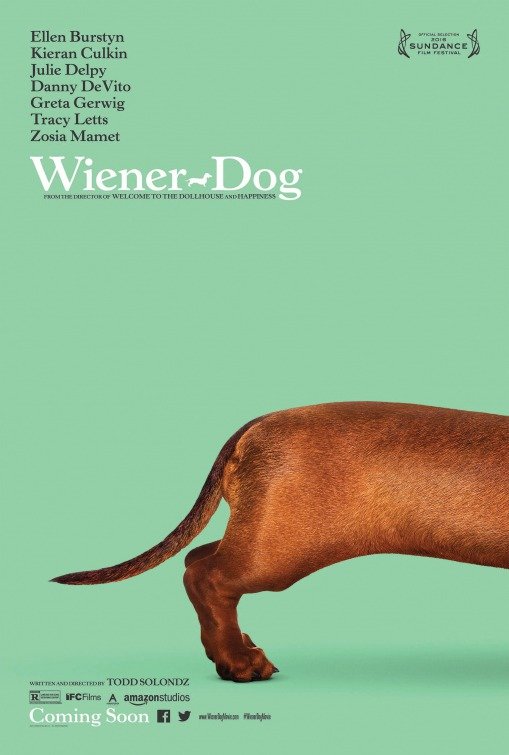 WIENER-DOG is a quirky independent comedy about a dachshund and the lives she touches. A man brings home the new pet for his young boy who’s just survived cancer. When the dog gets sick, the boy’s parents try to put it to sleep. However, a vet’s female assistant adopts it rather than kill it. She travels to Ohio with her ex-boyfriend. The dog’s next owner is a film teacher hated by his students and unable to sell his second script after writing a hit. Finally, a perpetually grumpy elderly woman owns the dog. A song is inserted between the last two segments. “The Ballad of Wiener-Dog” features shots of the dog as if it were part of a drive-in intermission.

The film teacher segment and the Wiener-Dog ballad are hilarious. The other two segments, however, are rather depressing and boring. The movie contains lots of foul language, images of diarrhea when the dog gets sick and a gruesome violent image. The bad parts of WIENER-DOG are unacceptable examples of bad taste. The movie’s violent ending will infuriate dog lovers and disgust media-wise moviegoers.

(HH, B, C, PC, Co, Ho, LL, VVV, S, A, D, M) Strong, somewhat harsh and hopeless humanist worldview with some light moral, redemptive elements about family bonds and living a wasted life by being mean and unforgiving, but little is really learned, plus a snarky college student expresses politically correct, Marxist sentiments about race, gender and class with a light LGBT context; 19 obscenities (mostly “f” words), one GD and five light profanities, plus some overdone close-ups of sick dog’s diarrhea; brief very strong violence as animal’s innards are split open when hit by truck, plus man fakes a bomb threat; mother talks to young son about what neutering a dog means and argues that male dogs “rape” female dogs and cause venereal disease, plus man reveals to ex-girlfriend his father had his Downs Syndrome brother neutered; no nudity; alcohol use; smoking; and, sickly elderly woman appears mean and names her pet dog “Cancer,” but freely gives her irresponsible granddaughter $10,000, and a couple other characters appear rather surly, mean, cynical, and rude as well.

WIENER-DOG is a quirky independent comedy by quirky filmmaker Todd Solondz about a dachshund, and the different lives she touches during her life. WIENER-DOG has some hilarious clean moments, but it also has brief gruesome violence, lots of foul language, disturbing scenes, and some scatological content that’s gratuitous and dilutes the movie’s power.

The movie opens with a man on a farm taking the dog out to a cage in his truck and delivering it to a pet store. For several seconds, the dog wanders around her new cage, not knowing what to make of all this.

A married couple buys the dog for their young son, who’s just survived a cancer scare. Named “Wiener-Dog,” the pet perks up the boy’s spirits, but the boy feeds the dog his granola bars, and she gets terribly ill. The camera shows disturbing, lengthy shots of the poor dog’s diarrhea.

The parents take the dog to the animal shelter to be put to sleep, but the vet’s female assistant, Dawn, takes pity on her and brings her home. The next day, she runs into her former boyfriend, Brandon, from her high school. Brandon’s more interested in Dawn’s dog rather than her, but his interest prompts him to invite Dawn on a road trip back to Ohio where his Downs Syndrome brother and his wife live.

After the visit to Ohio, the movie next shows the dog being owned by a film teacher (played by Danny DeVito), who had a hit screenplay but now is finding trouble selling his new screenplay. None of his young students seem to like this sad sack, because he doesn’t fit into their avant-garde, leftist theories about film. The last sequence shows the dog living with a sick, elderly woman who’s granddaughter suddenly comes to visit looking for another handout. Sadly, the grandmother tells her granddaughter she’s named the wiener-dog “Cancer.”

Before these last two sequences, the movie contains a funny video and travelogue of the dog, all to the tune of a funny song titled “The Ballad of Wiener-Dog.” The video is designed like one of those drive-in intermission movies trying to sell items from the concession stand.

The Danny DeVito sequence and the Wiener-Dog ballad are the most successful sections in this quirky movie. They both contain several hilarious, superbly done moments that are keenly observed. However, the other sequences are kind of depressing and uninteresting. Interestingly, however, Dawn and Brandon were the major characters in Todd Solopndz’s second movie, WELCOME TO THE DOLLHOUSE from 1996 (Dawn’s last name is Wiener and the children at school in DOLLHOUSE call her “Wiener-Dog”). Also, the scatological shots in the first story and a gruesome violent image from the movie’s last sequence are extremely infuriating as well as rather depraved. Finally, WIENER-DOG also contains a fair amount of strong foul language.

Regrettably, the bad parts of WIENER-DOG are too unacceptable. The movie’s violent ending will infuriate many dog lovers and disgust media-wise moviegoers.