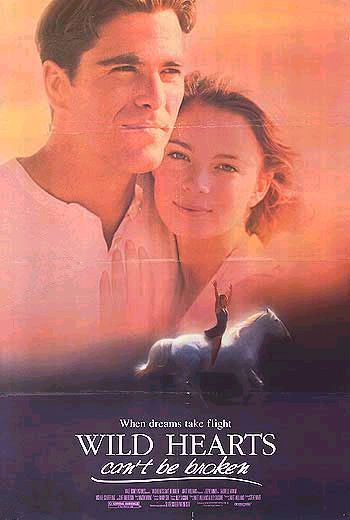 WILD HEARTS CAN’T BE BROKEN is the true inspirational story of Sonora Webster, stunt rider at Atlantic City’s Steel Pier amusement pier, and a wonderful testimony to the determination of the human spirit.

Daydreams of love, adventure and stardom were the fantasies of many young girls growing up during the Great Depression. For 16-year-old Sonora Webster, those “dare to live your dream” desires were her one-way ticket away from obscurity and the colorless existence of life in rural Georgia circa 1932.

Suspended from school, with the prospect of becoming a ward of the state looming on the horizon, Sonora runs away from her aunt to answer a newspaper advertisement for a diving horse girl, a fearless female brave enough to leap from a tower platform 40-feet high, astride a gallant horse, and plunge into a tank of water.

Only Sonora’s impetuous nature doesn’t land her the job. Besides, W.F. Carver’s traveling stunt show already has a diving horse girl, Marie. However, the show’s owner is impressed with Sonora’s spunk and so hires her as a stable hand. Sonora manages to capture the heart of Carver’s wayward son, Al, who helps train Sonora to earn a place in the act.

Sonora gets her chance when Marie dislocates a shoulder but has to go it alone when a long-standing rift between father and son drives Al away. Al remains devoted to Sonora, who becomes a popular attraction, writing her letters which the senior Carver secretly burns.

Al eventually returns to the show and effects a reconciliation with his pop, telling him he has negotiated a contract with Atlantic City’s Steel Pier amusement pier. On the way there, in a tenderly shot scene, the elder Carver stops along the roadside to rest under a shady tree, and observing the gentle blowing away of a dandelion, he dies.

Al steps in to fill his father’s shoes and later publicly proposes marriage to Sonora as she climbs the tower platform. Tragedy strikes when Sonora hits the water with her eyes open, causing blindness. Fiercely determined to do the impossible, Sonora sets out to prove that a dream worth having is a dream worth fighting for.

WILD HEARTS CAN’T BE BROKEN is a film for the whole family, which moves beyond the simple coming-of-age theme of a plucky youngster falling for an older suitor to incorporate a real-life tragedy. After the accident leaves her permanently blinded, Sonora continues to perform, learning she must fit reality to her dreams and, in essence, finds that far away place in her own heart. Interestingly, all three players in the film have, in their own way, wild hearts. Even more interesting, is that all are broken as they are reconciled with one another and learn to live with their limitations.

The only hitch in the story is Sonora’s rebellious attitude in the beginning and her aunt’s one dimensional characterization. With a little adjustment, the script could have emphasized the positive and soared.

Even so WILD HEARTS CAN’T BE BROKEN affirms that God gives us the desires of our heart (Psalm 37:4), though it ignores his precondition that we must first delight ourselves in Him. Furthermore, the film calls on us to act on our dreams now, for as James 4:14 notes, “you are a mist that appears for a little while and then vanishes,” a point tenderly brought home by the dandelion scene. Also figuring prominently is a biblical theme of repentance and forgiveness. As far as the action sequences go, in which a horse charges up a platform where its daring rider attempts a moving mount, kudos are in order.