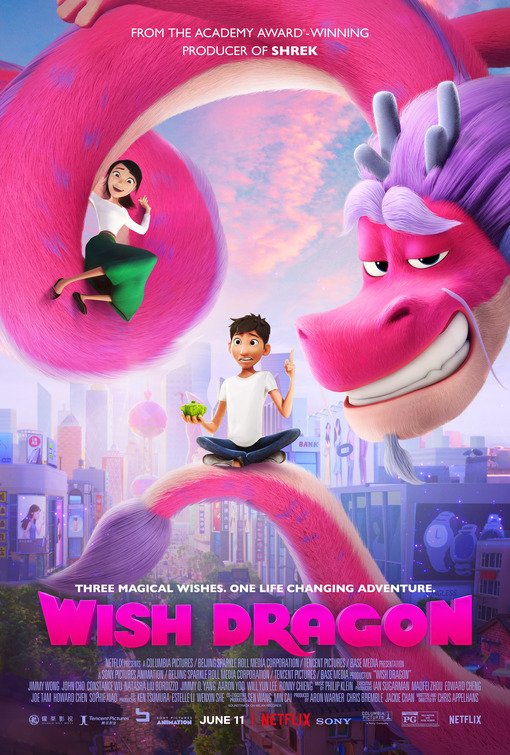 WISH DRAGON is a comical animated fantasy on Netflix. A college boy named Din in Shanghai is deciding what’s most important in life when he ends up possessing a magical teapot containing a wish-granting dragon. Din wants is to get his childhood best friend back. However, his friend, Li Na, now lives a wealthy lifestyle as a beautiful model. Regrettably, bad men are after the magical teapot Din possesses. Will the villains ruin Din’s chances of growing close again with his old friend by stealing the magic teapot?

WISH DRAGON has a mixed pagan worldview with good and bad elements. First, in the story, gods rule the “spirit world” and can punish or reward humans when they die. The wish dragon was once a powerful, selfish ruler in China who was mean to everyone, including his own children. This false theology is mitigated by strong moral, redemptive messages celebrating friendship, family, sacrifice, thinking of other before yourself, and free market capitalism. Ultimately, the movie’s strong, heartwarming moral and redemptive messages save WISH DRAGON from being totally abhorrent. Nevertheless, MOVIEGUIDE® advises extreme caution.

(PaPa, FRFR, BB, C, CapCap, L, V, A, M):
Dominant Worldview and Other Worldview Content/Elements:
Strong pagan, mixed worldview with good and bad content includes strong false religion (the “spirit world” is ruled by gods who can punish and reward, the gods turn a selfish ruler in China who was mean to people [including his children] into a wish dragon to learn the “true meaning of life,” an old man says he’s “a god” in a few scenes and talks about “the will of the gods” in two separate scenes, and there’s a reference to violating “the laws of heaven”), combined with strong moral, redemptive, pro-family messages stressing and celebrating friendship, family, thinking of others before yourself, forgiveness, being friendly to neighbors, and sacrifice, plus there’s a redemptive death and resurrection, and a subplot has a pro-capitalist resolution
Foul Language:
No obscenities, but two light profanities, light toilet humor in one scene, and some other phrases like “stupid,” “dirtbag” and “shut up”
Violence:
Light cartoon violence includes martial arts fighting, kicks, punches, people shoved through walls, getting thrown out of moving vehicles, falling off buildings or from great heights, glass breaks in an argument, police officers are attacked and kicked to the ground, running around on rooftops and more, and boy doesn’t wear helmet on motorcycle that he drives recklessly
Sex:
No sex
Nudity:
No nudity
Alcohol Use:
Social drinking, the mother mentions at one point that she thought her son was drunk, but he wasn’t; Drug Use and Abuse: No smoking or drugs, except for one mention because the mother thinks her son maybe took drugs since he isn’t acting like himself;
Miscellaneous Immorality:
Stealing (wish dragon steals something to eat in one scene, for example), some lying (for example, the hero lies to his mother about studying, but she finds out right away he’s been shirking his studies, and he suffers the consequences, admitting to her he’s wrong), and other bad attitudes that ultimately get corrected.

WISH DRAGON is an animated comical fantasy streaming on Netflix about a young college boy in Shanghai as he figures out for himself what’s most important in life, with the help of his new wish-granting dragon friend that strangely ends up in his possession. WISH DRAGON has some false, overt polytheistic theology, but its story contains strong, heartwarming moral, redemptive messages promoting friendship, family, love, forgiveness, thinking of others before yourself, sacrifice, and free market capitalism that make for a delightful viewing experience.

The movie opens with young Din having a hard time at school as a child. He meets another outcast named Li Na, and the two become best friends immediately. Din and Li Na spend all of their time together over the years, until Li Na’s family has to move out of town. Din and Li Na swear to be best friends always.

Flash forward 10 years. Though he’s going to college, Din is still in the same poor section of town delivering food on a bike while Li Na is a model posing on giant billboards throughout the city. Li Na is now living a rich and famous life, one that doesn’t intersect with average people like Din. Even 10 years later, Din misses Li Na, and all he wants is to have his best friend back.

One day, Din delivers soup to a strange old man who says he’s a god and talks about “the will of the gods.” Instead of paying for the soup, he gives Din a small, old green teapot.

That night, Din imagines attending Lin Na’s birthday party the next day. She’s become a rich, famous model. Din practices meeting her again, but the cheap suit he bought for the party starts coming apart. Dejected, Din starts to think he’s kidding himself when the little green teapot comes alive and a large hot pink Chinese dragon emerges from it. Calling himself LongZhu, the dragon claims to be a wish dragon. Din finds out that the dragon can grant him any three wishes that he could imagine, so long as he doesn’t wish for love.

Din must now decide what is most important to him and how he should use these wishes before his magical dragon is gone. However, there are bad guys out there who want to steal the little teapot and get those wishes for themselves. Din is trying to decide how he will use his three wishes as he’s being chased down by gangsters and running into other obstacles as well.

What will Din use his wishes on? Will the bad guys steal the teapot? What happens with Li Na?

WISH DRAGON has brilliant production values. The animation is outstanding, along with all the vibrant colors on screen. The artists skillfully create a beautiful, whimsical world, and viewers can feel the happiness that exudes from it. The animated characters look so real that it is almost easier to feel emotionally connected to them with all of their facial expressions.

WISH DRAGON has a strong, mixed pagan worldview with positive and negative content. For example, the story takes places in an animated “reality” where the spirit world is ruled by gods who can punish and reward people. There’s a heaven in this reality, and the gods are shown punishing a selfish ruler in China (called a “lord”) who was mean to other people, including his own children. They make him a wish dragon to serve 10 masters and, hopefully, learn “the true meaning of life.”

Despite this false religion, the story focuses on strong moral, redemptive, pro-family messages. These messages stress and promote friendship, family, thinking of others before yourself, love, compassion, forgiveness, being friendly to neighbors, and sacrifice. In addition, the story’s positive resolution features a pro-capitalist subplot. Also, the bad guy gets his just desserts.

All in all, therefore, MOVIEGUIDE® advises extreme caution for the false religion in WISH DRAGON. Ultimately, the movie’s strong, heartwarming moral and redemptive messages save WISH DRAGON from being totally abhorrent and misguided.