"An Enjoyable Visit to Jellystone Park" 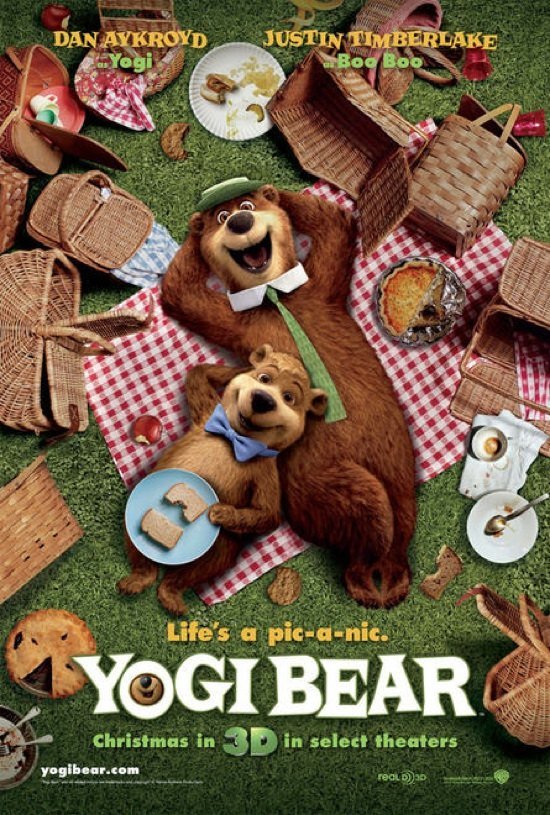 YOGI BEAR takes the iconic, lovable cartoon figure and gives him and his little pal, Boo Boo, the big screen treatment – in 3D no less. Dan Aykroyd and Justin Timberlake do the voices for the two CGI bears, who are mixed with live actors playing Ranger Smith, the villain and other humans. In this feature-length episode, Yogi messes up Ranger Smith’s plan to keep Jellystone Park open when the local mayor wants to sell the whole park to loggers. Now, it’s up to Yogi and his adorable sidekick, Boo Boo, to join forces with Ranger Smith and save Jellystone!

Lots of pic-a-nic baskets get stolen in YOGI BEAR, but lots of fun is had by all. Aykroyd and Timberlake do wonderful jobs of capturing the voices and hilarious spirits of Yogi and Boo Boo. The live actors join the fun. Though some liberal environmentalist messages occur, there are also conservative, moral messages about doing the right thing, being a steward of God’s Creation and serving the people. YOGI BEAR is a charming family movie that brings two classic cartoon characters to life. It makes an enjoyable holiday outing for everyone.

(BBB, EE, So, PP, V, M) Very strong moral worldview where Yogi Bear is encouraged to use his smarts for good, with some strong environmentalist content supporting the socialist federal endangered species act, but also with a strong implied biblical, more conservative, pro-American attitude of doing the right thing, being a good steward of God’s Creation and serving the people, all of which diminish the environmentalist elements and prevent them from being too radical; no obscenities or profanities but a couple verbal references to Boo Boo having gas problems eating certain foods, turtle burps and ranger says, “Dang it!”; light but plentiful cartoon violence includes Yogi Bear flung into tree trunk, Yogi Bear and picnic basket contents go flying toward audience in 3D, fireworks catch on fire and start spinning toward crowd, Yogi Bear does water ski stunts and his cape catches on fire, Yogi Bear flies glider recklessly endangering himself and Boo Boo, raft with CGI bears and people on it go down water rapids, souped-up jeep races through woods, Yogi Bear bumps rear end on fence posts while trying to hop a train, turtle’s frog-like tongue flips out and sticks to things, pratfalls, objects destroyed; no sex but romance blossoms and there’s a brief kiss; no nudity; no alcohol; no smoking or drugs; and, greedy corrupt mayor lies, employee sabotages his boss (Ranger Smith) for power, Yogi Bear steals picnic baskets and often ignores Ranger Smith’s and Boo Boo’s warnings, Yogi Bear doesn’t completely change (he’ll always be a lovable rogue stealing picnic baskets but Boo Boo and Ranger Smith will always be the voices of reason and goodness), and naturalist makes comment about scratching animals’ backsides and says that this doesn’t work with humans.

YOGI BEAR takes the iconic, lovable cartoon figure and gives him and his little pal, Boo Boo, the big screen treatment, in 3D no less. It has a constant merry spirit of funny family fun for everyone.

In this live-action feature, Yogi and Boo Boo are CGI cartoon characters who, like the cartoon, however, can talk. They are voiced by Dan Aykroyd and Justin Timberlake.

Yogi has come up with new ways to steal picnic baskets at Jellystone Park. At the same time, he tries to escape the notice of his long-suffering nemesis Ranger Smith, played by fun actor Tom Cavanaugh.

Little do they know that Mayor Brown has a nefarious plan to sell the whole park to loggers, in order to cover the local city’s huge deficit he has run up. Ranger Smith convinces him, however, to let him have a few days to get the money to put Jellystone Park in the black.

Mayor Brown has some tricks up his sleeve, however. To counter Smith’s plan to raise money by celebrating Jellystone’s 100th Anniversary, he tempts Ranger Smith’s apprentice, Ranger Jones, to sabotage the celebration so the mayor can appoint Jones the new head ranger. Jones fails at his own sabotage attempts until he realizes that the perfect one to sabotage Ranger Smith is Yogi Bear, who thinks he’s “smarter than the average bear” but often isn’t.

When Yogi ruins the celebration and Jones replaces Ranger Smith, it’s up to Yogi to prove he actually is smarter than the average bear. He and Boo Boo team up with Ranger Smith to save Jellystone, along with Smith’s new love interest, a cute naturalist and documentary filmmaker named Rachel, played by Anna Faris.

YOGI BEAR is pretty much what moviegoers might expect, especially if they grew up watching Yogi Bear and Boo Boo’s cartoon exploits on TV. Lots of pic-a-nic baskets get stolen, but lots of fun is had by all.

In the end, YOGI BEAR is a very merry movie for the entire family. There are some really good jokes, some hilarious bear antics by Yogi and plenty of fun 3D effects that make Yogi and Boo Boo come alive.

Of course, Yogi will always be a rascally rogue who likes to steal picnic baskets and will never listen to Ranger Smith or Boo Boo until it’s almost too late. On the other hand, there are always lessons to learn, with the lovable Boo Boo being Yogi’s conscience, the voice of reason and goodness.

One thing should be noted about this movie, however. The federal endangered species act helps Ranger Smith, Yogi and Boo Boo solve the script’s plot problem and defeat the villainous mayor. Thus, YOGI BEAR has a strong pro-environmentalist message. This liberal message rubs up against the movie’s more conservative message, represented by Ranger Smith, that we are all stewards of God’s Creation and that public officials have an obligation to the people. Concerned parents probably will want to explain the differences to their little ones.

That said, YOGI BEAR is a clean, charming movie that brings a classic cartoon character to life. If you’re smarter than the average jaded moviegoer, you just might want to see it. If so, you’ll find it makes an enjoyable holiday outing for the entire family.