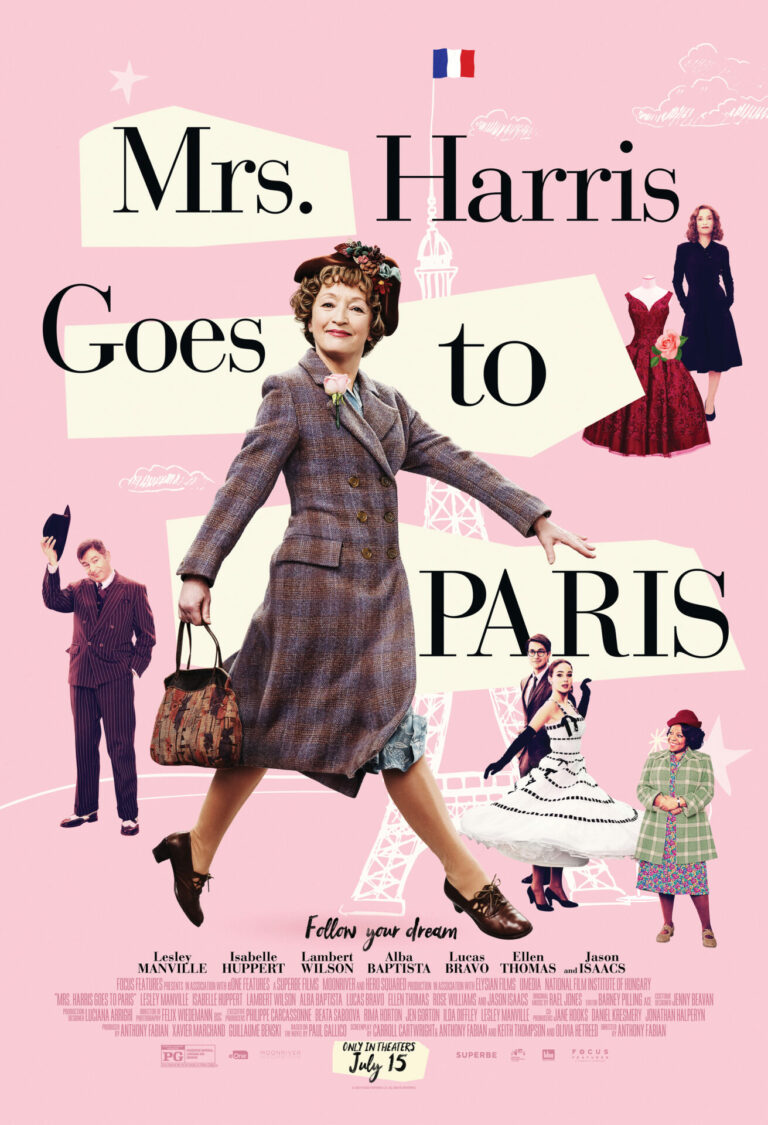 MRS. HARRIS GOES TO PARIS is a charming comedy set in 1957. Mrs. Ada Harris is a perky cleaning woman in London whose missing husband’s finally been ruled killed in World War II. Her clients are mostly wealthier people, except for a ditzy young actress trying to break into show business. One day, Mrs. Harris spots a beautiful Christian Dior dress in the home of a wealthy client who hasn’t paid her in weeks. The woman says the dress cost 500 pounds. Mrs. Harris decides she must have her own Dior dress, but how can she get the money?

MRS. HARRIS GOES TO PARIS is a charming, funny, exquisite comedy. Leslie Manville delivers a wonderful performance as Mrs. Harris, who causes a delightful ruckus in Paris. Manville’s supported by a great ensemble. The movie’s story shows how bold kindness can positively transform people’s lives. It also has strong pro-capitalist elements supporting business growth by offering products for more and more people. MRS. HARRIS GOES TO PARIS is pretty clean, with only a little, mostly light foul language. There are some references to gambling and luck, however.

(BB, CapCap, Co, L, V, N, A, D, M):
Dominant Worldview and Other Worldview Content/Elements:
String moral worldview supporting kindness, bold courage, treating people fairly, with strong pro-capitalist elements supporting growing one’s business by offering products for more and more people, plus a minor character says he’s a communist and his statement is played like a joke
Foul Language:
No obscenities, one strong Jesus profanity, three light profanities
Violence:
Light violence when people encounter union workers protesting and striking in the streets of Paris, and a Paris taxi driver drives very fast, nearly missing other vehicles and pedestrians
Sex:
No sex scenes or sexual immorality, but two young men kiss a young model (one of the kisses is on a red carpet for a movie premiere, so it’s hardly romantic)
Nudity:
Upper male nudity in one scene, and there are models in modest underwear as they try on clothes
Alcohol Use:
Some alcohol use, and woman drinks too much champaign one night and wakes up with a hangover
Smoking and/or Drug Use and Abuse:
Some smoking, but no drugs; and,
Miscellaneous Immorality:
There are some references to gambling and luck, and two character discuss an existentialist philosophy point by Sartre about people’s outer persona versus people’s inward persona, adding that each person can have multiple personas (one person cracks a joke about existentialists in referring to them).

Set in 1957, MRS. HARRIS GOES TO PARIS tells the story of a widowed cleaning woman in London who gets a chance to visit Paris and buy a fancy dress from Christian Dior, where she causes a ruckus. MRS. HARRIS GOES TO PARIS is a charming, funny, exquisite comedy where bold human kindness wins the day and transforms people’s lives for the better and contains very little objectionable content.

Mrs. Ada Harris is a perky cleaning woman in London who’s just learned her missing husband’s been officially ruled killed in the world war, in 1944. Her clients are mostly wealthier people, except for a ditzy young actress trying to break into show business.

Sadly, a letter tells Ada that some personal effects of her husband, who went missing in action in Eastern Europe during World War II, have been found, so the authorities are changing his status to Killed in Action. Accompanying the letter is her husband’s wedding ring. She tells her friend, Vi, that she already realized her husband was probably killed, because, if he hadn’t been, he would have sent her word that he was alive or returned to her.

One day, Ada spots a beautiful Christian Dior dress in the home of a wealthy client who hasn’t paid her in several weeks. The woman says she just paid 500 pounds for the dress. Ada decides she must have a Dior dress of her own, but how can she get the money?

Mrs. Harris starts working some extra hours to save up money for a fancy Dior dress, plus the trip to Paris and back. Her plan seems to be working well. However, one day she and her close friend, Vi, are invited to the dog races by the local playboy, a nice-looking older man named Archie who’s seen dating younger women and who works at the track. In one race, Ada sees one of the dog’s names is Haute Couture. She believes it’s a sign, so, against Archie’s advice, she puts 100 pounds for the dog to win the race.

At first, the dog is in the lead, but halfway through, it gets distracted and starts wandering around, coming in last place. To make matters worse, a man from the military visits her with the rest of her husband’s personal effects. However, he says, since it took a few days to list him Missing in Action back in 1944, they actually gave her too much of his salary back then. Does this mean SHE owes the government some money?

As soon as he tells her that, however, Ada’s fortunes change suddenly. The military man, and two other visitors, bring Ada good news, and she finds herself with 585 pounds, more than enough to fly to Paris and buy a dress.

In Paris, late at night, she meets some old men at the train station. They’re amused by this strange middle-aged lady, who’s carrying a beat-up suitcase and says she wants to go to Christian Dior to buy a dress. In a spirit of friendly diplomatic relations, one of the older men gladly escorts her to the doorstep of Christian Dior. There’s a commotion at the doorstep, however, because today is the day of Dior’s 10th anniversary, and the famous designer is holding a small, special fashion show for his biggest customers.

Timidly at first, then with growing boldness, Mrs. Harris storms the exclusive citadel of haute couture at Christian Dior. Her boldness and fearless kindness start to transform her own life and the lives of others for the better. Disaster lurks around the corner, however.

MRS. HARRIS GOES TO PARIS is a charming, funny, exquisite comedy. Leslie Manville delivers a wonderful performance as Mrs. Harris. She’s supported by one of the best ensembles this year, and beyond. Led by Director, Producer and Co-Writer Anthony Fabian, the movie

The story in MRS. HARRIS GOES TO PARIS shows how bold kindness can transform people’s lives for the better. Mrs. Harris is used to being around wealthy people, so she’s not afraid of them. She’s also not afraid of the more snooty employees who work for Dior. In fact, she wins them over with her charm and her kindness. The movie also has a strong pro-capitalist subplot where one of the major characters, supported by Mrs. Harris, encourages Christian Dior to start making some of his designs affordable for the growing cadre of female consumers.

The movie is pretty clean, with only a little, mostly light foul language. There are some references to gambling and luck, however. So, caution is advised for children, who probably won’t understand and enjoy the story as much as older viewers anyway.