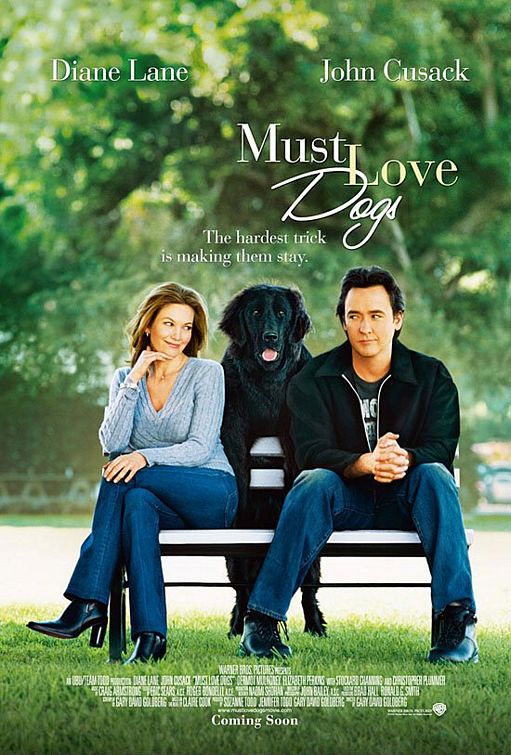 MUST LOVE DOGS is a Twenty-First Century romantic comedy about recently divorced Sarah Nolan and the all-too-real world of Internet dating: the ups, downs and speed bumps encountered along the information superhighway. Played by Diane Lane, Sarah's two sisters encourage her to use the Internet to find dates. After a series of dating disasters, she finds a hopeless romantic named Jake, played by John Cusack. Torn between the intensely honest Jake and a seemingly perfect, newly separated father of one of her students, Sarah must once again take a journey into the unknown, unpredictable world of love.

MUST LOVE DOGS is well-written and well-directed by Gary David Goldberg, and the cast gives wonderfully heartfelt performances. Despite the wonderful production values though, the movie contains a strongly Romantic worldview that (like our society) has so blurred the line between love and sex that it is at times almost indiscernible. With the obligatory homosexual characters and the rule of “sex without consequence,” this movie follows right in line with the Hollywood trend of politically correct romance. Considering the movie's foul language, sexual messages and alcohol use and abuse, MOVIEGUIDE® advises extreme caution for MUST LOVE DOGS.

(Ro, H, Ho, LL, V, SS, N, A, M); Romantic worldview elements where self-fulfillment is the basis for morality and emotional needs are the highest priority, with light humanist elements which look only to man for solutions to emotional problem, and some homosexual characters; 12 mostly light obscenities and one profanity; light violence such as young child accidentally gets hit with a stick at school and gets a bloody nose to which he exclaims, “Good Lord, it’s a gusher,” and couple arm-wrestles on their first date; sexuality is a major point of discussion throughout the film including discussions of how women want to be treated sexually, what a divorced woman can do if she wants to have an affair, adultery referenced by several school-aged children, man reveals how many men want to sleep with a particular woman in their office, man reveals preferences for sexual deviance, references to sadomasochism and being handcuffed, discussion of pornographic websites, dialogue about a promiscuous sister, and homosexual discusses how he and his lover met, talk of bi-sexual & pan-sexual women, also several personal ads are posted on dating websites that include a lot of sexual innuendo, another woman makes reference to fantasy sexual role-play, passionate kissing shown, couple has high speed chase around the city trying to locate a pharmacy to buy condoms, men watch women in bikinis dance seductively at a gentlemen’s club, and implied fornication; Woman’s cleavage shows throughout the film as she wears low-cut blouses, strippers dance seductively in bikinis, man shown in boxer briefs after sexual encounter, and woman’s back shown as she cries in her shower; several depictions of alcohol use including references to getting drunk, people drink wine and beer throughout the film, drunk man collapses on front porch of house; no smoking; and, miscellaneous immorality includes multiple people lying about themselves their age or their physical appearances on their personal ads.

MUST LOVE DOGS is a Twenty-First Century romantic comedy about the all-too-real world of internet dating: the ups, the downs and the speed-bumps that can be encountered along the information superhighway.

Pre-school teacher Sarah Nolan (Diane Lane) has only been divorced for eight months, and eight months is way too long: way too long for her family that is. So, they stage an intervention to get her back into the world of dating. Her sisters Carol and Christine desperately try to set her up with several men they know. Their widowed father, however, proves to be a fine example of someone who has made quite a breakthrough with internet dating. So, Sarah’s sisters go to perfectmatch.com and post a profile for her that simply reads: “Voluptuous, sensuous, alluring and fun. DWF seeks special man to share starlit nights. Must Love Dogs.”

It doesn’t take long for the responses. Sarah reluctantly agrees to her family’s wishes, and this takes her through a series of disastrous dates with desperate suitors. However, through this human comedy of errors, she does meet one intriguing individual, Jake Anderson (John Cusack). Jake is a hopeless romantic who hand-crafts wooden boats and measures love according to the principles of DR. ZHIVAGO. Torn between the intensely honest Jake and Bob, a seemingly perfect, newly separated father of one of her students, Sarah must once again take a journey into the unknown, unpredictable world of love.

Based on the best-selling book by Claire Cook, MUST LOVE DOGS is a very funny, witty film written and directed by two-time Emmy award winner Gary David Goldberg. Goldberg easily hits the comedy-nail-on-the-head while never losing the sincere touching moments of human emotions. His pacing is wonderful, and he pulls some great performances out of the actors. Diane Lane deftly handles the character of Sarah with all the grace, charm and neurosis that one expects from a modern-day, divorced, 40-year-old-woman. John Cusack is always easy to watch perform, and, although his character’s intensity is a little off-setting at first, most viewers will quickly fall in love with his honesty and sincerity. Christopher Plummer’s performance as Sarah’s father Bill stands out as he takes center stage with his reading of William Butler Yeat’s “Brown Penny.” Stockard Channing brings a breath of fresh air as Bill’s free-spirited love interest Dolly. Some totally committed performances by Elizabeth Perkins, Ali Hillis and Dermot Mulroney round out this tremendous cast.

The characters in this slice-of-life movie can, however, be all too familiar and all too unsettling. The one place that the movie seems to stray a little is the fact that, apart from the “hopeless romantics” that Diane Lane and John Cusack portray, all the other characters in the film seem obsessed not with finding love but rather with getting sex. Sarah’s sisters, although their hearts are in the right place by wanting to help their lonely sibling, only ever refer to love in the context of getting physical affection. The same holds true for Jake’s cynical friend Charlie, unapologetically played by Ben Shenkman. Charlie thinks that Jake’s view of true love is archaic. Regrettably, this movie, like our society, has so blurred the line between love and sex that it is at times almost indiscernible. With the obligatory homosexual characters and the rule of “sex without consequence,” this film follows right in line with the Hollywood trend of politically correct romance. Morally speaking, it continues our culture’s treacherous trek down a very slippery slope.

This slippery slope of morality is perhaps no better illustrated than in one of the most disturbing scenes that takes place early in the movie as Sarah’s pre-school class sits around talking about their parents and how most of them are separated or divorced. Children blurt out how their parents had affairs, or as one child puts it so matter-of-factly, “My mom says my dad is incorrigible. . . which basically means that he likes other women.” We see illustrated here a fine example of how family values have been re-defined by Hollywood and how divorce, once an exception to the rule, has now become the accepted standard and practice of an off-the-rack culture.

All in all, MUST LOVE DOGS is likeable and often funny. Viewers will easily be drawn into the characters’ crisis. A lot of the humor, however, revolves mostly around sexual subject matter, so the movie is definitely not for children. Parents and adults should also be discerning that, although this is the “norm” that Hollywood conveys, it is not the standard by which our heavenly Creator views love.