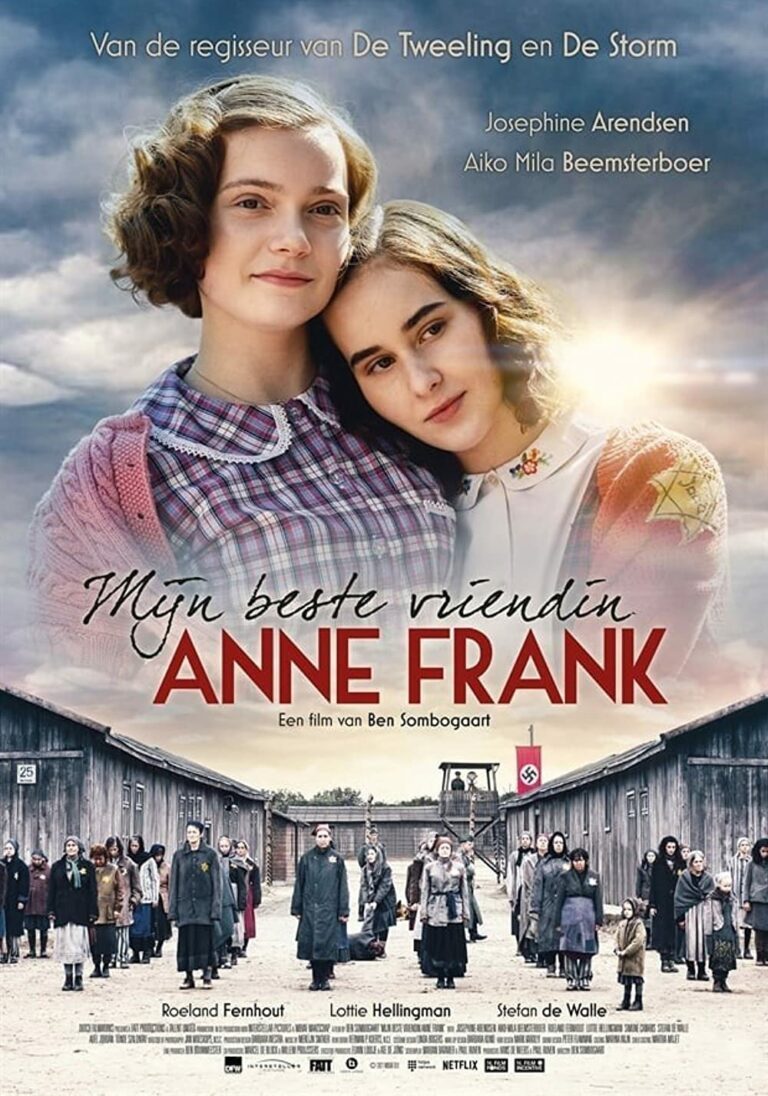 MY BEST FRIEND ANNE FRANK is a historical, biographical drama on Netflix about the lives of Anne Frank and her best friend, Hannah. The movie begins with the girls playing a game in the early days of World War II in the Netherlands. Anne and Hannah promise to be friends and do everything together. However, when Hitler cracks down on the Jews living in the Netherlands, they get separated and eventually wind up together in a Nazi labor camp, where Anne is starving to death.

MY BEST FRIEND ANNE FRANK is a gripping and chilling reminder of the evils of Hitler’s National Socialist tyranny during World War II and the Holocaust. It also tells a heartwarming story about friendship and courage when Hannah risks her life to help get some food to her friend, Anne. The movie has a strong moral, biblical worldview. The characters talk about God delivering them from their dire situation. That said, MY BEST FRIEND ANNE FRANK contains some disturbing violence, several obscenities, some lewd references, and briefly depicted nudity in a biology book. So, MOVIEGUIDE® advises extreme caution.

(BB, ACACAC, L, VVV, S, NN, MM): Strong biblical, moral worldview of looking to God, God being in control of people’s lives and deciding their fate, and girl risks her life to help her friend, plus a strong statement against the horrors of National Socialism, which reached its tyrannical peak in Hitler’s Germany in the 1930s and 40s
Foul Language:
Six obscenities, name calling and two scenes of a girl emptying a bucket full of fecal matter
Violence:
Very strong and strong disturbing violence includes several scenes of people being shot and slapped and kicked and beaten, and several scenes of death by starvation associated with the Holocaust
Sex:
Implied sexual intercourse, three scenes of two girls talking about French kissing, one scene of a girl and boy kissing, sexual illustrations in a textbook
Nudity:
Illustration of a nude woman in a biology book
Alcohol Use:
Two scenes of adults drinking
Smoking and/or Drug Use and Abuse:
No smoking or drugs;
Miscellaneous Immorality:
Moderate level of miscellaneous immorality such as greed, revenge, disregard for life, and lust.

MY BEST FRIEND ANNE FRANK is a historical, biographical drama on Netflix about Anne Frank’s best friend, Hannah Elizabeth, before and during their internment in a concentration camp during the Holocaust in 1944. MY BEST FRIEND ANNE FRANK is a gripping, movie that gives viewers a front row seat of the horrors that Hannah, Anne and many other victims endured at the hands of National Socialist Germany.

The movie begins with Anne and Elizabeth playing a game of hide and seek with her friend Hannah, but they quickly realize Hannah’s father has been taken by Nazi soldiers. From innocently tossing the ball back and forth or talking about which boy to kiss, the movie humanizes Anne Frank with a look at what her life was like before Nazi Germany invaded the Netherlands. However, it offers a spin by focusing on Anne’s best friend Hannah and her heroism rather than Anne Frank’s tragic story.

Anne and Hannah promise to be friends and stay together forever. Anne and Hannah do everything together, including watching movies in the back of the theater, making crank calls and making breakfast. However, when Hannah gets home, her father tells the family they want to leave the country, but the Germans won’t let them leave. Hannah says perhaps Anne’s father can get them passports, but he won’t allow it.

At this point, German soldiers come for Hannah’s family, but Hannah’s mother is pregnant, and they can’t travel. Going into premature labor, the mom and baby die.

Hannah and her younger sister are separated from their father and taken to Bergen-Belsen, one of the notorious Nazi labor camps. One night, Hannah realizes Anne is near her, in another section of the camp. Hannah puts her life on the line to get some food to her best friend, Anne.

From starvation to random killings, MY BEST FRIEND ANNE FRANK is a bone chilling reminder of the horrible treatment of Jews and other people by Hitler’s National Socialist regime in Germany during the Holocaust. Aiko Mila Beemsteroer and Josephine Arendsen deliver stellar performances as Anne Frank and her best friend, respectively. The cinematography is excellent, with wonderful use of filming life before the camp in bright colors and the scenes in the camp in dark, greyish colors. The wardrobes and sets also add to the movie’s authenticity. The emphasis on Hannah’s life rather than Anne’s is a refreshing, informative historical twist as well. Rather than just focusing on Anne’s tragic story, the movie stresses Hannah’s heroism and bravery to help Anne during her time in the camp. Viewers also get an unseen look into Anne and Hannah’s lives before the Holocaust. This is something movies about Anne Frank usually don’t do, if ever. By telling its story in flashbacks and flashforwards, the movie keeps the plot moving, with many twists and turns the audience doesn’t see coming. Parents can use this movie to discuss with their older teenagers about the historical events surrounding the Holocaust.

MY BEST FRIEND ANNE FRANK has a strong moral, biblical worldview. The characters believe God will take care of them and that He decides their fate. Also, they talk about God delivering them from their dire situation. There are several scenes of Jews praying in Hebrew.

Christians will like the movie’s biblical themes. The belief that “God will liberate them” is a reminder to viewers that God is still in control despite one’s circumstances. Hannah’s devotion to Anne is heartwarming to watch as that love for each other is what keeps them going until the end of Anne’s life.

Despite all this, MY BEST FRIEND ANNE FRANK has some disturbing violence. There are scenes of starved women, people being randomly beaten and shot as well as people dying from starvation. The movie also has several obscenities, implied sex, talk of kissing boys, and female nudity in a biology book. So, MOVIEGUIDE® advises extreme caution.