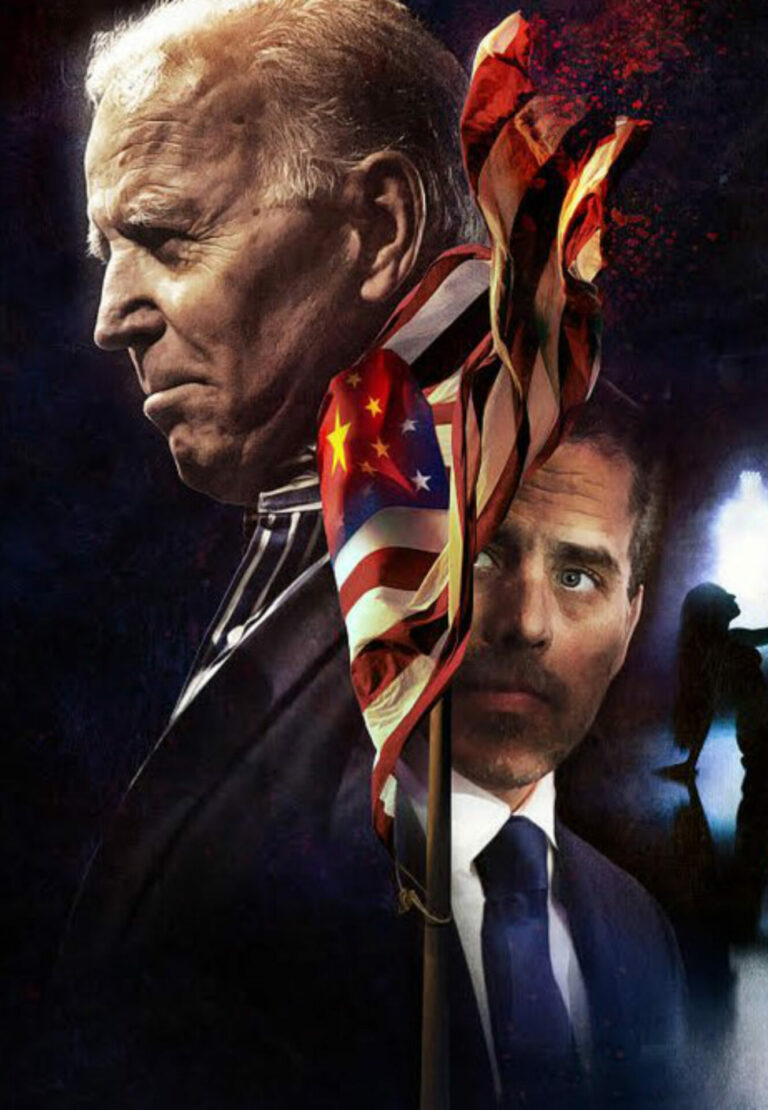 MY SON HUNTER is a satirical drama about President Joe Biden’s son, Hunter. It focuses on Joe and Hunter’s personal and professional relationship. It focuses on Hunter’s addiction to drugs and sex, plus Hunter and Joe’s controversial dealings with foreign nationals in Central Europe, Russia, and Communist China. The story starts one night in December 2019, after the FBI has taken possession of one of Hunter’s laptops. Hunter talks to a new girlfriend and his father during the night.

MY SON HUNTER opens with the statement, “This is not a true story. . . except for all the facts.” The movie is extremely well-directed, written and acted, with some crazy, funny moments and high drama. It takes a complex subject with many details and boils everything down to a digestible, absorbing story. MY SON HUNTER is an eye-opening depiction of corruption and immorality at the highest levels of the Democrat Party, the federal government and the “news” media. However, MOVIEGUIDE® advises extreme caution for adult viewers because of immoral carnal behavior, images of women in skimpy outfits and strong foul language.

(BB, PP, Ho, C, LLL, V, SS, NN, A, DD, MM):
Dominant Worldview and Other Worldview Content/Elements:
Moral, Pro-American worldview exposes the moral and financial corruption of Democrat Joe and Hunter Biden, including their enabling of the Communist Chinese government’s economic and military cold war on the United States, its people and their national security and prosperity, plus two women are shown kissing and a man with five-o’clock shadow and wearing a woman’s outfit sits on a chair in a room that’s just had a wild party, and there are two or three references to a major character’s family serving as Christian missionaries in China
Foul Language:
43 obscenities (including about 25 “f” words), five GD profanities, one JC profanity, two light profanities
Violence:
Some images of people burning buildings during a protest riot in Los Angeles, plus woman briefly discusses genocidal policies in China by the communist government, but she’s expressing moral outrage while mentioning it
Sex:
Brief depicted fornication in a lewd comical sequence, implied fornication, implied oral sex in one scene, suggestive dancing by scantily clad women, scantily clad dancer makes suggestive movements around one man sitting on a couch, two women are shown kissing at a wild drug-infused party, Joe Biden sniffs some women’s hair, implications of prostitution in one scene, and a mention of visual references to prostitution and pornography on a laptop (discussed but not shown)
Nudity:
Partial rear female nudity where a few women are shown wearing skimpy outfits in one sequence, plus there’s some upper male nudity and depicted female cleavage
Alcohol Use:
Alcohol use
Smoking and/or Drug Use and Abuse:
Scenes with tobacco smoking, cocaine snorting and smoking crack cocaine, plus a scene where man buys some drugs off the street; and,
Miscellaneous Immorality:
Movie exposes political corruption, financial corruption and activity that borders on treason.

MY SON HUNTER is a satirical drama streaming on the Internet about President Joe Biden’s son, Hunter, their personal and professional relationship, Hunter’s addiction to drugs and sex, and Hunter and Joe’s controversial dealings with foreign nationals in Ukraine, Central Europe, Russia, and Communist China. Extremely well-directed and acted, with some crazy, funny moments, MY SON HUNTER exposes the truth behind multiple Biden family scandals and Hunter Biden’s love-hate relationship with his father, and not without some sympathy for two major Biden family tragedies and the negative effects they had on Hunter, but MOVIEGUIDE® advises extreme caution for adult viewers because of strong immoral behavior and lots of strong foul language.

The movie is mostly set in December 2019, the month that the FBI took control of Hunter Biden’s laptop, which Hunter forgot he left at a computer repair shop. The movie opens with Joe Biden take a brief swim in a pool with a female Secret Service standing nearby. Biden exits the pool and tells the agent, “Thanks, I needed that.” A note or crawl appears on the screen, while the agent reads the crawl, saying, “This is not a true story. . . . except for all the facts.”

Cut to a BLM protest that’s turned into a fiery riot in Los Angeles. A blonde protestor named Grace Anderson and her friend are interviewed briefly by a black reporter. Grace talks about “social justice” and “equity” while complaining about President Trump’s tweets. Her friend calls Trump’s supporters Nazis and domestic terrorists. After talking to the reporter, Grace videos some leftist protestors beating up on what looks like two Trump supporter. She enjoys the beat-down, but she can’t use the footage because it makes her cause look mean.

Cut to Hunter Biden entering a dance club and walking to a party in a back room after briefly stopping to snort some cocaine in a bathroom. Meanwhile, Grace is getting ready in a dressing room in the next room. Back in the party room, she’s introduced as a new star at the club. Dressed in a skimpy outfit, she comes out on a small stage and starts dancing suggestively while Hunter watches intently.

Suddenly, after handing the hostess a big wad of cash, Hunter stops everything, and the party moves to the notorious Chateau Marmont. While people dance and talk, Hunter puts himself into a cocaine stupor. Three or so hours later, everyone is passed out on the floor. Hunter wakes up and imagines a conversation with a dog sitting on a man’s lap, who tells him that all the people are freeloaders, and he should order everyone to leave. Hunter does just that, and he takes Grace on a little drive. He stops at a seedy place among a group of tents for homeless people and buys some more drugs.

Back at the Chateau Marmont, Hunter starts telling Grace about his life. He begins with the death of his mother and baby sister in 1972 because of a car accident. His father remarried and the family, including his older brother Beau, would spend summers at a small house in Nantucket, but Beau died in 2015 because of a brain tumor. “He was my best friend,” Hunter tells Grace. “He was like the conscience of the family. Now I’m the only one Dad has left from Mommy, and I just want to make him proud.”

As he picks up a packet of cocaine on the floor, Hunter says, “I’m the one who brings in all the deals. I’m the one who provides a future for everyone in this family.”

The problem is, he tells Grace, is that he’s a drug addict. When Grace asks him what about rehab, he says he’s tried rehab five times, but it’s never worked for him. He also tells her that, after his brother died, the grief was so bad that he and his brother’s widow had an affair.

Hunter takes Grace down to the hotel pool. Their conversation is interrupted by the female Secret Service agent working to protect Hunter’s father, Joe, during the campaign. He changes into a robe to go talk to his father in a black limousine.

The rest of the movie involves Joe and Hunter talking about what’s on Hunter’s laptop, including emails regarding Hunter and Joe’s controversial dealings with foreign nationals in Ukraine, Central Europe and Communist China. In a short digression, the agent relates some background about Ukraine. Later, Grace convinces Hunter to talk about his business dealings overseas. She tells Hunter that her father, a lawyer, taught her how to answer questions when being interviewed by the press or by law enforcement, and maybe she can help.

MY SON HUNTER is extremely well-directed, written and acted, with some crazy, funny moments and high drama. It takes a complex subject with many details and boils everything down to a digestible, absorbing story. Director Robert Davi and his team, including the actors, apply some fun, clever, dramatic tricks, flourishes and techniques to engage viewers.

MY SON HUNTER is a satirical, dramatic exposé of the truth behind multiple Biden family scandals. Although it touches on Hunter and Joe Biden’s sexual peccadilloes and Hunter’s rampant drug abuse, the meat of the movie is about the Biden family’s corrupt financial dealings overseas. Hunter serves as the point man for corrupt dealings in Ukraine, Central Europe, Russia, and Communist China. The dealings involve lots of corrupt influence peddling, with most of the corruption benefitting Hunter, Joe and some of Hunter’s cronies, with no regard for what benefits the United States, its people and their national security and prosperity. Most damagingly, the movie shows that Hunter’s deals with Chinese companies are connected to the Chinese Communist government and its financial attacks on and military campaign against the United States. At one point, the movie echoes a major complaint by Hunter in one email to one of his daughters, where he complained about having to “pay for everything for this entire family for 30 years.” In the movie, Hunter says, “I’m the one who brings in all the deals. I’m the one who provides a future for everyone in this family.”

MY SON HUNTER is an eye-opening depiction of corruption at the highest levels of the Democrat Party, the federal government and the national “news” media. MOVIEGUIDE® advises extreme caution for adult viewers, however, because of strong immoral carnal behavior, women in skimpy outfits in one sequence, drug abuse, and lots of strong foul language. Please see our CONTENT section for details.