"Derailed by a Mixed Ending, Dark Themes and Gratuitous Language" 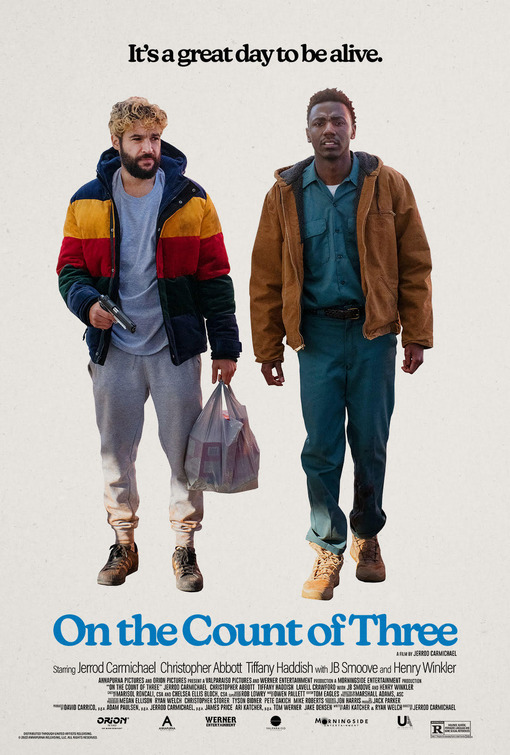 ON THE COUNT OF THREE is an independent drama with some dark comedy about suicide and revenge. A young black man named Val is bored with life and just broke up with his girlfriend. He meets his best friend, Kevin, who’s in a mental hospital after another failed suicide attempt. Val has bought two guns for a suicide pact between he and Kevin, who’s grown tired of seeing so many unhelpful therapists. They decide to spend one more day together before committing suicide. Then, Kevin decides he wants Val’s help to murder his old therapist, who physically abused Kevin when he was a child.

ON THE COUNT OF THREE has disturbing themes, intense violence and lots of strong foul language. The filmmakers and actors try to enliven the story with some humor, but much of the comedy is dark and too imbued with hopelessness and despair. ON THE COUNT OF THREE has a bittersweet and ultimately unsatisfying violent ending where one character gets away with a major crime. Therefore, the movie is abhorrent and excessive rather than enlightening, much less uplifting.

(HH, B, PC, LLL, VVV, S, N, A, D, M):
Dominant Worldview and Other Worldview Content/Elements:
Strong humanist worldview where “fate” steps in and ironically leads to one lead character committing a violent crime but is ultimately saved from being punished because of a big lie, mitigated slightly by some moral elements where a character decides he’d rather not commit suicide and instead live for his new child who’s just been conceived, plus there’s some politically correct content where one lead character is a gun control nut and makes a few silly, ignorant comments against guns and the Second Amendment
Foul Language:
At least 219 obscenities (including many “f” words), 12 strong profanities, 13 light profanities, black characters use the “n” word a few times, and one character makes an obscene gesture
Violence:
Very strong violence when man is shot in the head during a struggle over a gun and dies, plus some strong violence when man starts punching his adult son repeatedly in the head when son’s friend uses a tire iron knocks the father unconscious, it’s implied that a man shoots himself in the mouth, police chase two men in a Jeep, two men use gun to rob a convenience store of some items, two men point guns at each other in a suicide pact but one of the men stops it by pushing the other man’s gun away, it’s implied that a therapist abused a young patient when he places his hand on the boy’s knee, and there is a theme of suicide
Sex:
Some brief sexual talk and man’s girlfriend is pregnant
Nudity:
Brief upper male nudity
Alcohol Use:
Some alcohol use
Smoking and/or Drug Use and Abuse:
Smoking but no drugs; and,
Miscellaneous Immorality:
Suicidal man stalks a former school bully and his wife he just ran into, thinking about killing the man, who’s still a jerk, but he sees they have children and decides not to do that.

ON THE COUNT OF THREE is an independent drama about two young men, one black and one white, who decide to commit suicide by the end of the day, but one of the men eventually balks when he learns about the baby his pregnant girlfriend is having and learns that the other man wants to murder the therapist who abused him as a child. ON THE COUNT OF THREE has disturbing themes, lots of strong foul language and a mixed, somewhat bittersweet and unsatisfying violent ending where one character gets away with a major crime.

The movie opens with a young black man named Val at his boring job ignoring phone calls from his girlfriend. He uses his belt to try committing suicide in a bathroom stall but fails. He then decides to quit his job.

Val drives to a local psychiatric ward to visit his friend, Kevin, who’s been committed to the facility after his latest failed suicide attempt. Kevin has long been a very troubled person, with constant suicidal thoughts and several attempts. Val convinces Kevin to escape from the ward through a window that a nurse opened when she caught Val smoking in Kevin’s room.

In his car, Val shows Kevin he’s brought two guns with him. He says that, like Kevin, he’s finally decided that life’s not worth living anymore. Val explains that his life is monotonous, work is a chore and his girlfriend, Natasha, has left him. Since it’s still early morning, they drive behind a rundown strip club to shoot each other.

However, when the time comes for them to kill each other with the guns, Kevin knocks Val’s gun away when Val fires the weapon. Kevin tells Val he’d like to have one more day of life together before they kill each other. Val agrees.

However, they can’t decide what to do to spend the time. They start to eat a meal at a local diner, but Val hates the place. So, they drive to the place where they used to work, a little amusement center with video games and a motocross park. They remember the good times they spent at the place. They ride motorcycles on the track, but Val ends up crashing.

Then, Val takes Kevin to a gun range to make sure Kevin knows how to shoot. Though Kevin is a gun control nut, he enjoys the range, saying shooting guns is better than taking Zoloft.

They end up at a convenience store. However, the man behind the counter asks them to wait because he’s got to count the money in the register first since he just started his shift. Val and Kevin get impatient, though, and Kevin pulls out his gun and takes the items they wanted to buy.

Finally, Kevin hatches a plan to go to his old therapist, Dr. Brenner’s, office and murder the man, who physically abused Kevin as a child. Val agrees, but when they get there, the office secretary says Dr. Brenner isn’t coming in until 6 pm, when he has an appointment with a special patient. They decide to return at 5:45 to kill the doctor.

In the meantime, Kevin convinces Val to visit his estranged father, who owns an auto repair shop. After all, it will be Val’s last chance to reconcile with his father. However, Val’s father is just as mean as ever. They argue over some money Val’s father owes him, and his father starts beating Val to a pulp. Kevin intercedes and uses a tire iron to knock him unconscious. Before they leave, Val takes all the money in his father’s cash register.

There’s still time left. Val finally calls his girlfriend, Tasha, and she angrily informs him she’s been trying to reach him because she’s found out she’s pregnant with their baby. Val decides to visit Tasha’s place and give her the money he took from his father’s cash register. However, she refuses to take the money.

Back together with Kevin, Val informs Kevin he no longer wants to commit suicide, or help him kill Doctor Brenner. He drives Kevin to the doctor’s office building, however, and waits in the car. An unexpected plot twist occurs, leading to a mixed, somewhat bittersweet and unsatisfying, violent ending.

ON THE COUNT OF THREE has disturbing themes, intense violence and lots of strong foul language. The filmmakers and actors try to enliven the story with some funny moments, including some comical banter between the two leads, but much of the comedy is dark and too often imbued with hopelessness and despair. Viewers might hope for an uplifting ending, but the ending, despite one positive outcome, is too mixed and unsatisfying. It also involves a lie where one of the two lead characters gets away with a violent crime. Ultimately, therefore, ON THE COUNT OF THREE is abhorrent and excessive rather than really enlightening, much less uplifting. Consequently, it makes the reference in the end credits to the national suicide hotline, 1-800-273-TALK, a bit disingenuous, however helpful it may be to those viewers actually suffering from suicidal emotions.