ONLY MURDERS IN THE BUILDING: Episode 1.1: True Crime 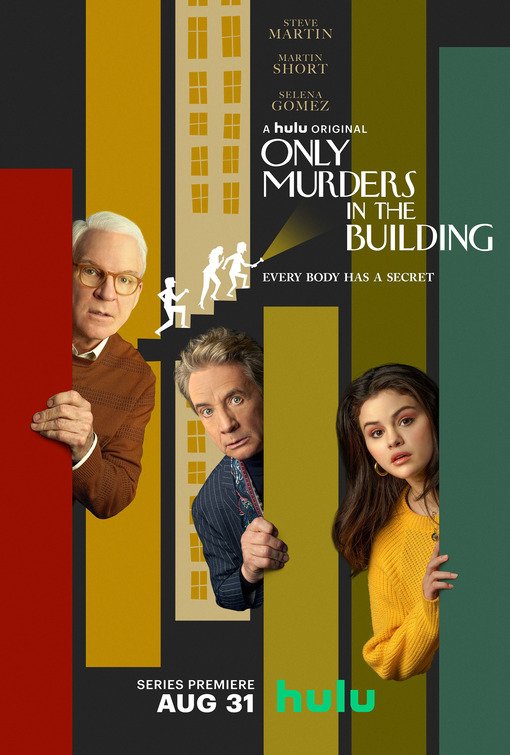 Episode One of Hulu’s ONLY MURDERS IN THE BUILDING, introduces a washed-up TV actor named Charles-Haden Savage, who had a “Columbo”-style detective series in the early 1990s. Charles-Haden is friends with Oliver, a financially broke Broadway producer, and Mabel, a woman with a mysterious background. They team up to solve the murder of a man living in their New York apartment building. Desperate for attention, Charles-Haden convinces Oliver and Mabel to create a true-crime podcast based on their investigation. However, Mabel hides the fact she knew the deceased when she was a teenager and helped him cover up a friend’s accidental death.

This first episode of ONLY MURDERS relies on funny verbal wit over splashy physical comedy. The chemistry between Steve Martin and Martin Short is hilarious from the start. The weak spot is Selena Gomez, who’s fine in her role but outmatched by her veteran costars. Also, the episode doles out its information a bit slowly. Sadly, the first episode of ONLY MURDERS IN THE BUILDING has a strong Romantic worldview with several “f” words and a strong profanity. MOVUEGUIDE® advises extreme caution.

(RoRo, B, LL, V, S, A, MM):
Dominant Worldview and Other Worldview Content/Elements:
Strong Romantic worldview with some moral elements where the three main characters are all rich people engaged in flouting rules to discover the murder mystery they are out to solve, and each one has his own vainglorious goal and is secretly working to achieve it
Foul Language:
Eight “f” words, one a-hole, two GDs
Violence:
A dead teenage girl is seen in a flashback, with her friends frantically trying to figure out how to make excuses for it
Sex:
No sex scenes, but a box of “sex toys” is found and very quickly shown
Nudity:
No nudity Alcohol: Some casual drinking
Smoking and/or Drug Use and Abuse:
No smoking or drugs; and,
Miscellaneous Immorality:
Strong miscellaneous immorality includes the lead characters sneak into their building against police orders, tamper with a dead body, and break into an office and steal a box of information about the dead person, plus one woman hides the fact she knew the murder victim from the men who are supposed to be her investigative partners.

“True Crime,” Episode 1.1 of ONLY MURDERS, introduces a washed-up TV actor named Charles-Haden Savage (Steve Martin), who had a “Columbo”-style detective series in the early 1990s, a financially broke Broadway producer named Oliver Putnam (Martin Short) and a young woman with a mysterious background named Mabel Mora (Selena Gomez). All three share a love for true crime stories. So, they team up to solve the murder of a man named Tim Kono in their deluxe New York City apartment building.

Ever desperate for a new creative project and desperately in need of an attention-getting hit, Oliver convinces the other two to join him in not only trying to solve the murder but to create a true-crime podcast based on their investigative efforts. Because they want to focus on deaths in their building, they call it “Only Murders in the Building.”

Charles-Haden is more subdued about his desire for a return to glory, but still comically trades on his past fame to try and gain access to information. Meanwhile, Oliver is hiding the fact that he’s desperately broke and in danger of eviction. He’s shown visiting his adult son pleading for a loan that the exasperated son won’t provide. Mabel reveals that she only has her lavish apartment because of inheriting it from an aunt. She’s also hiding an important fact: she knew the deceased Tim Kono when she was a teenager, and they were involved in the accidental death of another friend and its coverup.

The first episode of ONLY MURDERS sets up everything with a reliance on verbal wit over splashy physical comedy, but it works in the vein of Woody Allen’s literate takes on the lives of New Yorkers, particularly his 1993 gem MANHATTAN MURDER MYSTERY. The show’s opening credits are designed to look like a cover for the New Yorker magazine, an indication of the high artistic standards Steve Martin’s trying to bring to the program.

This is the sixth time that Martin and Short have worked together, and their chemistry is hilarious from the start. While Martin is reserved in his role, Short is his usual flamboyant self while still managing to convey his character’s desperate side in touching fashion. The weak spot is Selena Gomez, who is fine in her role but outmatched by her veteran costars.

One other slight imperfection is that the episode doles out its information a bit slowly. Though it gives viewers a good hook at the end, it sometimes has a bit too muted a tone and slow a pace along the way. Overall, however, ONLY MURDERS IN THE BUILDING is a well-made program.

Sadly, though, the first episode has a strong Romantic worldview, several “f” words, and a strong GD profanity. So, MOVIEGUIDE® advises extreme caution.