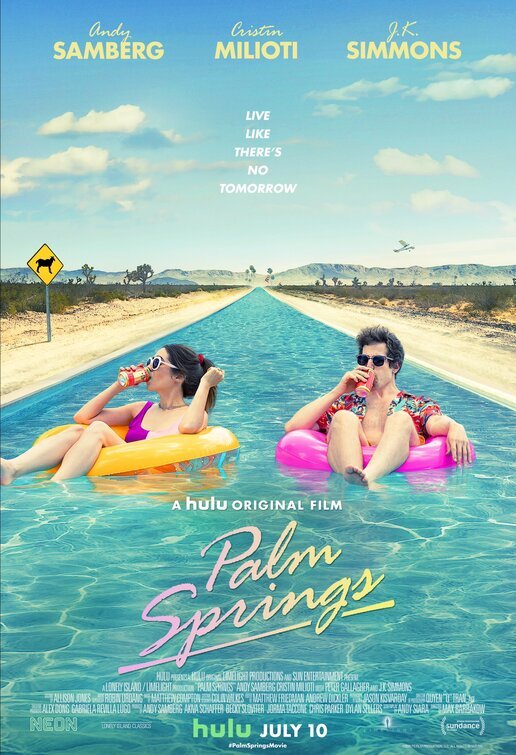 PALM SPRINGS is an original Hulu theatrical movie that follows Nyles and Sarah, a young couple who get stuck in an infinite time loop and relive Sarah’s sister’s wedding day repeatedly. The pair wreak havoc on her sister’s big day, while doing whatever else they want with no consequences. Sarah finally figures out a way to get them out of the time loop, but Nyles isn’t sure if he wants to leave with her and return to reality.

PALM SPRINGS has good chemistry between the two lead characters, but the movie isn’t funny at all. It also has an unsatisfying, hedonistic pagan worldview coupled with a nihilistic attitude that life being meaningless, so people should just do whatever they want to do with no consequences. The movie is also plagued by lots of foul language, sexual content, drug abuse, violence, and the two characters killing themselves willingly to start the day over again. There’s one nugget of morality, because the movie constantly relives the marriage of two people. Overall, however, PALM SPRINGS is an abhorrent, disgusting movie without redeeming value.

(PaPaPa, HH, AbAbAb, B, HoHo, LLL, VV, SS, N, AA, DDD, MM):
Dominant Worldview and Other Worldview Content/Elements:
Very strong pagan, hedonistic worldview where the characters do whatever they want with no consequences, existential, nihilistic attitudes that life being meaningless enhance the main characters’ hedonism of doing whatever they want and a character calls himself the anti-Christ and then professes there is no God so life is meaningless, one moral element where a couple gets married, and some depicted homosexuality
Foul Language:
105 obscenities (mainly “f” words and “s” words) and 20 light profanities
Violence:
Strong violence includes man gets shot by other man with bow and arrow more than once, fist fights between men where a fork is stuck in someone’s face, conversation about suicide, woman rams man with car into another car, woman walks in front of a semi, woman drives car into a semi, several explosions, two people blow themselves up, girl falls and busts her teeth out of her face, and blood is seen
Sex:
Couple fornicates, and then man engages in self arousal, woman is depicted enjoying oral sex, implied sex between two men, implied sex between two people, a dating couple kisses, and woman sleeps with her sister’s fiancé
Nudity:
Upper male nudity several times when men are swimming, whole backside of a man is shown as he runs naked through the desert, woman is seen in her bra, upper male nudity while man is in the shower
Alcohol Use:
Alcohol seen and drank throughout the movie and one instance of drunkenness that’s not rebuked, and drinking and driving
Smoking and/or Drug Use and Abuse:
Drugs talked about and used several times in the movie and a character is seen snorting cocaine; and,
Miscellaneous Immorality:
Strong miscellaneous immorality includes cheating, lying, divorce conversation.

A Hulu original movie, PALM SPRINGS opens with an earthquake. The audience meets Nyles, who is accompanying his girlfriend, Misty, to her friend, Tala’s, wedding. While Misty gets ready for the big day, Nyles enjoys the day by himself before heading to the wedding.

Cut to the reception. Misty just finishes giving a speech and calls up the bride’s maid of honor and sister, Sarah, to give her speech. However, Nyles beats her to the mic and gives a heartfelt speech to the bride and groom. Afterwards, Nyles and Sarah meet on the dance floor and end up leaving together to get away from everyone.

They start to head back to Nyles and Misty’s room, when Nyles and Sarah catch Misty cheating on him. So, instead, they head out to the desert where they start to hook up. However, their rendezvous is cut short when a man named Roy starts shooting arrows at Nyles trying to kill him. Sarah is incredibly confused and worried about why Roy is trying to murder Nyles. As Nyles crawls toward a cave that looks like it has magical powers, he tells Sarah not to follow him, and he disappears into a portal.

Nyles wakes up at the beginning of the previous day and the audience learns he’s in a time loop. As he begins to enjoy the day all over again, Sarah comes looking for him furious and wondering why the day is happening all over again. Nyles informs her about the infinite time loop and how there’s no way out of it. At first, Sarah is upset. However, she slowly starts to relent, and Nyles and Sarah wreak havoc on the wedding over and over again until finally Sarah decides she can’t do it anymore. Sarah leaves Nyles to find a way to get them out of the time loop, while Nyles continues to do whatever he wants.

Sarah finally comes back to Nyles and tells him she found a way out. Will Nyles leave with Sarah or will he stay in the time loop forever?

PALM SPRINGS misses every mark plus more. The acting and chemistry between the two leads is good, but sadly, the movie isn’t funny at all. It has all the right nuts and bolts to be a comical movie about living the same day over and over again. However, it instead focuses on Nyles and Sarah doing everything they can to ruin the special day of someone else while having fun doing whatever they want.

PALM SPRINGS has a strong pagan worldview promoting a hedonistic, anything goes lifestyle. The filmmakers couple this with an existential, nihilistic attitude saying life is meaningless, so people should just do whatever we want with no consequences. PALM SPRINGS is also plagued by lots of foul language, sexual content, violence, and the two characters killing themselves willingly to start the day over again. There is one nugget of morality because the movie constantly relives the marriage of two people. Overall, however, PALM SPRINGS is an abhorrent, disgusting movie with no redeeming value.