QUEEN OF THE LOT 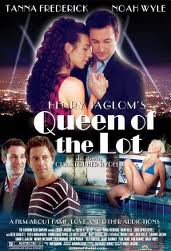 QUEEN OF THE LOT focuses on Maggie, a young starlet who wants to make the A list. Maggie wears an ankle bracelet for drinking and driving. Maggie is having an affair with Dov Lambert, who is not only a Hollywood star but also comes from Hollywood royalty. His father, Lou, is one of the big name producers. Dov is married, however, to another Hollywood star. Maggie pops pills, as is Lou and a couple other people. Maggie also drinks like a fish. Dov then gets Maggie smoking hash. Jeopardy finally kicks in when Dov seemingly kills the manager’s boyfriend at a poker game. Maggie tries to fix it. Dov’s brother Aaron tries to fix it. And, who cares? They should all be locked up!

A movie without jeopardy is very boring. Much of this movie is cinema verite insights into Hollywood royalty. Although they are reminiscent of real life situations, without a plot they get dull and confused. THE QUEEN OF THE LOT has mediocre acting and tawdry production values. It is very interesting, however, that the characters sing some very good Christmas carols. Also, the brother talks about redemption.

(PaPa, CC, LLL, V, SS, NN, AA, DDD, MMM) Strong, slightly mixed pagan worldview with discussion and exercises to help one’s chakras and kundalini, drug use, alcohol use, adultery strangely featuring a lot of Christian songs like O Holy Night, Silent Night, and some discussion of redemption; at least 38 obscenities and 13 profanities, vomiting, and a long discussion about masturbating pigs on a farm; fight at a poker game and man hits head on table, people think man is dead; strong sexual content includes homosexual sex (but nothing shown), several adulterous bedroom scenes (nothing shown), sexual kissing, graphic description of relieving pigs, wife jumps into pool to have sex with husband who’s committing adultery, then adulterous woman jumps in and starts kissing the wife, and homosexuals cuddle; upper female nudity, low-cut dresses; alcohol use to get drunk; smoking and lots of drug use; and, blackmail, gambling, theft of family jewels, covering up murder.

Once upon a time, Henry Jaglom made some interesting movies, but no more. QUEEN OF THE LOT is dull and sleazy. Worse, it’s a look at the world of Hollywood royalty, and most inside Hollywood movies bomb at the box office.

The movie opens with two women in bed watching a Joan Crawford movie that’s reportedly lesbian. Evidently, one of the women, Maggie, is a rising ingénue star. Regrettably, she’s under house arrest for her second DUI. So, she’s wearing an ankle bracelet. She’s extremely bored and frustrated she can’t get the two things she wants most in life, fame and love. Maggie is having an adulterous affair with Dov Lambert, who is not only a Hollywood star but also comes from Hollywood royalty. His father, Lou, is a big name producers. A couple of generations back, their name was Lefkowitz.

Maggie convinces her manager and the court to let her move to her manager’s house overlooking the valley. As her manager points out, this house was built with her money. Her manager moves with his male lover into the guest house, so Maggie can take over his home with her boyfriend, Dov, who’s married to another Hollywood star. Dov is using Maggie to make his wife angry.

Dov moves Maggie, with permission of the court, to Lou’s mansion. Maggie and Dov’s wife have a little tryst in front of him in the pool. Maggie is desperately climbing up the ladder and will do anything to success, including telling off color stories. Everyone’s taking too many drugs from pills to hash. Maggie’s manager has got her a Hindu specialist to get her aura in order. It’s Christmas time, and all these people, many Jewish, are singing very Christian Christmas carols. And, Dov’s brother, Aaron, falls for Maggie and tries to help her.

The manager’s lover is spending all his money in a poker game. Dov is losing all his money at the same game. Lou’s financial advisor, Odin, announces he’s lost all of Lou’s money, and Lou is about to lose his gigantic Hollywood home.

Jeopardy finally kicks in when Dov seemingly kills the manager’s boyfriend at the poker game. Maggie tries to fix it. Dov’s brother Aaron tries to fix it. And, who cares? They should all be locked up!

A movie without jeopardy is very boring. Much of the movie is cinema verite insights into Hollywood royalty. Although they are reminiscent of real life situations, without a plot, they get dull and confused.

THE QUEEN OF THE LOT has mediocre acting, tawdry production values. For instance, in one scene in a kitchen, it looks like the production notes were left on the counter. Perhaps the crew was smoking too much dope to pick them up.

Maggie is popping pills, as is Lou and a couple of the others. Maggie drinks like a fish, as do others. Dov gets Maggie smoking hash. The biggest problem is that none of the leads are attractive enough to capture interest.

It is very interesting, however, that there are some very good Christmas carols being sung in this movie. A few of them are pop Christmas carols, but many of them are Christ-centered. Also, Aaron, the real hero once we figure out what the plot is, does talk about redemption.