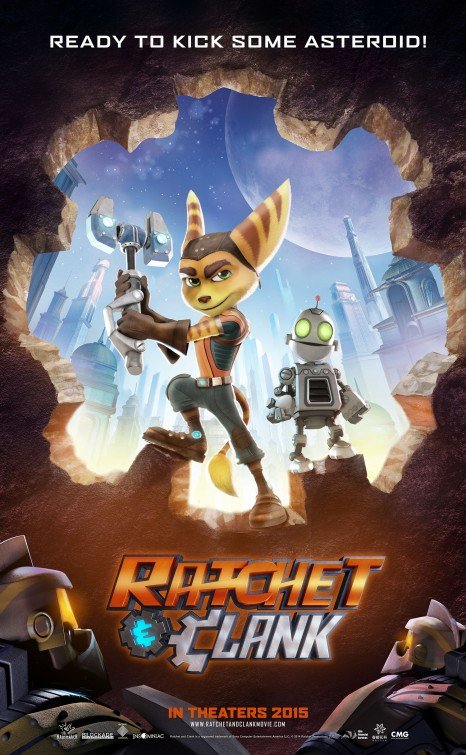 RATCHET & CLANK is an animated movie based on the PlayStation video game that’s sold 27 million copies worldwide. In this science fiction world, Ratchet, a small, orphaned, alien species known as a Lombox, has dreams of being a great hero. When a villain starts destroying uninhabited planets, the heroic Galactic Rangers are recruited to stop the villain. However, they have to add one more hero to their team. After being rejected, Ratchet cleverly finds a way to get on the heroic team, with the help of his new robotic sidekick, Clank.

RATCHET & CLANK is surprisingly well made, with very competent animation, colorful characters and funny moments that’ll have children and adults laughing. The worldview is strongly positive and moral. It stresses, “to be a hero, you don’t have to do big things, just right ones.” Ratchet learns the danger of pride that often comes with sudden fame, and the importance of taking responsibility for one’s bad choices. Thankfully, there’s no objectionable content in RATCHET & CLANK other than some very light animated action, making this movie suitable for most children.

(BBB, C, V, M) Very strong moral worldview about doing the right thing, taking responsibility for bad choices, the dangers of pride and pursuing fame, “Amazing Grace” plays in the background of an evil robot’s funeral, hero mentions having a “god-like physic”; no foul language, but characters vomit offscreen, character says “butt kicked” and “moron”; animated action with fighting, but nothing too intense, and planets are vaporized, but throughout the entire movie there’s only one implied casualty; no sexual content; no nudity; no alcohol use; no smoking or drug references; and, character is coerced into betraying his friends and main character lies at one point.

In this science fiction world, Ratchet is a Lombox, an alien that looks like a cat/fox. Though he’s quite small, Ratchet is rambunctious and has big dreams of being a hero. An orphan with no memory or information of who and where his family is, Ratchet was brought up by a mechanic named Grimroth (John Goodman).

When a villain known as Chairman Drek (Paul Giamatti) starts destroying uninhabited planets with a dangerous weapon, the Galactic Rangers, a team of four heroes, are called on to stop Drek. However, to defeat this villain, they need to add one more member to their team, so they hold open tryouts for anyone to apply, no matter how small. When Ratchet applies, however, the leader of the Galactic Rangers, Captain Qwark, rudely tells Ratchet he’s too small and would be a risk to take on as a member.

Meanwhile, Chairman Drek, with the help of Dr. Nefarious and his right-hand-robot Victor Von Ion (Sylvester Stallone), is creating a robot army to destroy the Galactic Rangers. One of the evil robots being created is defective. He realizes Drek’s evil plan and escapes. Crash landing onto a planet, the defective robot is found by Ratchet, who names the robot Clank. Clank tells Ratchet about Drek’s evil plan, so the two rush to the capitol to tell the Galactic Rangers.

When Ratchet and Clank get to the city, they find that the four Galactic Rangers are under attack. They come up with a clever way to save the Rangers in front of the entire city. With pressure from the press, Captain Qwark reluctantly reveals that Ratchet will be joining the Rangers as the fifth member of the team. However, his newfound fame starts to go to Ratchet’s head, and the team loses focus about the plan to stop Drek.

RATCHET & CLANK is surprisingly well made, with very competent animation, colorful characters and funny moments that’ll have both children and adults laughing. The story does get a bit cheesy at times, and some of the tongue-in-cheek jokes resembling THE LEGO MOVIE’s humor feel forced. It’s not a Pixar production, but the story is solid and many young people will enjoy it, especially those familiar with the game.

The strongly positive and moral worldview emphasizes, “to be a hero, you don’t have to do big things, just right ones.” Ratchet learns the danger of pride that many times can come with fame, and the importance of taking responsibility for one’s poor choices. It’s a positive lesson that comes across quite clearly. Thankfully, there’s no objectionable content in RATCHET & CLANK other than some very light animated action. Some of the marketing for this movie uses the line “Kick Some Asteroid,” but thankfully this line isn’t actually used in the movie.

1. What makes a hero heroic?

2. Ratchet became proud when he joined the Galactic Rangers. What does the bible say about pride? (James 4:10, Proverbs 16:18)

3. Why did the villain, Dr. Nefarious, want to hurt people?